The Service by Faceplant Theatre
​

The Service describes itself as an interactive theatrical experience combining dark humour and horror. The four surviving members of a religious cult, The Church of Ray of Light, are preparing for a very special occasion: the second coming of their leader, Ray. Through the course of an hour, the audience learn the history of the movement from its inception to its grisly ending with a mass suicide. The premise is sound and had the potential to be both chilling and amusing, however the execution couldn’t quite deliver.

The show contained a lot of clowning around and slapstick, together with some genuinely disgusting moments, such the character Moses entering in hospital scrubs covered in blood shaking hands with the audience, and wearing a swear jar that he would genuinely spit into each time he swore!

This interactive comedy included strange sing-alongs, crazy hand movements and several audience members being asked to confess their sins while holding a cabbage. Yes, it really was THAT messed up! Once a blend of cyanide, rat poison, drain cleaner and Tizer was distributed to the audience, we honestly considered drinking it just to bring an end to what had been a confusing and confused piece of theatre.

We can’t help but feel The Service could have been better. The actors over-played their roles to such an extent that we failed to identify with any of them, and their delivery was frantic and loud. The constant clowning quickly became tiresome and the comedy was somewhat lacking, as was any real element of horror. Perhaps the concept was overly ambitious for 4 players to fully explore in one hour-long production, which may explain why the dialogue and action was so frantically delivered. Ultimately, this is a Marmite show – some audience members were laughing so hysterically we assumed they were paid to be there, while some spent the hour with bemused expressions. As this was the final performance, we have a feeling the actors may be glad to have come to the end of the run, but it is possible The Service will generate a cult following (hopefully without too many suicides). 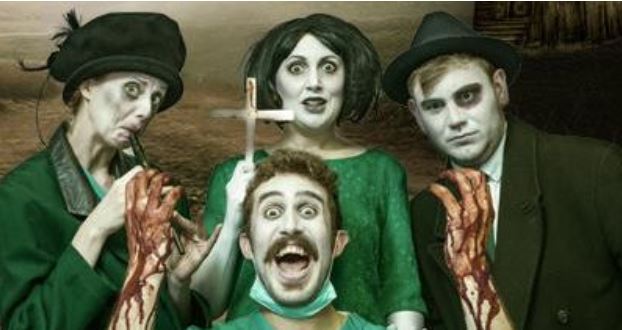