The Hidden House has been the big secret event of the 2014 scare season. Produced by UVE for Westfield Shopping Centre in Stratford, the attraction has been really down played, with the full reveal of the event only happening after this year’s Halloween season finished. Even then – we really weren’t sure what we could expect, as the marketing and pre-opening material has been enigmatic to say the least. Was it a scare attraction? Was it a Christmas grotto? With the promise of scarier scenes in the evening, and the cream of the UK’s scare actors working inside, we knew that it had the potential to be something good. Little did we know it would be this good!

The Hidden House has been built in a large open area overlooking the well lit food court.  From the outset, it is clear that no expense has been spared in theming this massive temporary structure, as from every angle it looks dark, creepy and atmospheric. We try to convince ourselves that it’s only a re-telling of the Little Red Riding Hood story but as we wait in line, being watched by a sinister, character, we begin to expect something much darker.

Once inside, we were then told the full story behind Little Red Riding Hood, and that she was running away from a mysteriously hidden figure known as “Him”. We were warned that “him” was waiting to indulge terror on his new victims, and before we knew it we were bolting out of the forest hut as quick as possible through a short but tight woodland themed pathway. The scares had started and weren’t about to let up!

All too soon we discovered the titular Hidden House and a witch host gave us our unenviable choice. Which of three doors should we enter by? This scene reminded us of Thorpe Park’s Cabin in the Woods as our group separated and went our different ways. Maybe we chose the wrong door but as scare seekers we were thrilled to find ourselves in a pitch black claustrophobic room with no obvious exit.  We cant say which door that guests should proceed through, but we are grateful that we got it wrong several times and explored some of the variables that the attraction has to offer!

From here on in, the show was just a blur of incredibly well themed sets, lively actors, some extreme audience interaction, alongside clever twists on pre-existing fair tales and legends. We passed through chapels, dark corridors and other detailed rooms, all with numerous actors waiting behind each dark corner ready to jump scare, or whisper terrifying words into our ears as we passed. The tension really built up until we were forced to enter a captive pitch black room, which used astonishing theatrical effects to make us feel like we were being cooked alive. It was an extremely clever scene and included some great scares before we were finally allowed to crawl to some supposed safety!

Finally reaching our feet after the adrenaline rush of the oven, we were greeted by our beautiful heroine – Red Riding Hood, in a scene that tied the whole attraction together into one coherent piece of theatrical scare. It was clear that “him” had been with us all this time and the finale mixed scares, drama and horror together, which meant we didn’t need asking a second time when implored by Red to run for our lives!

We were really impressed with the whole presentation of the attraction from beginning to end. The merging of different fairy tale stories together with a twisted tale of utter darkness was an intriguing, thrilling and inspiring creation and story put into one.  The sets and design were excellent throughout as were the incredible actors in every scene.  We really weren’t expecting such a detailed level of immersive and theatrical scares and the attraction will surprise many people expecting a family friendly Santa’s grotto. If you’re in London this Christmas to do your shopping then you should definitely had out to Stratford to visit The Hidden House. Whoever knew that Christmas could be this scary? 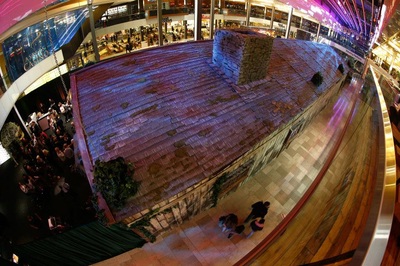 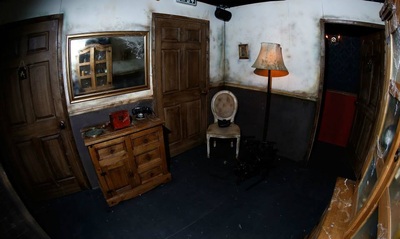 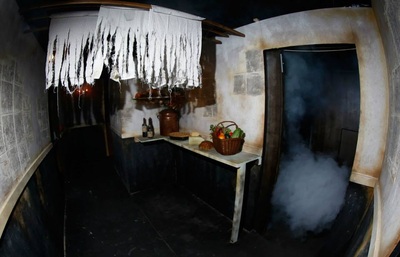 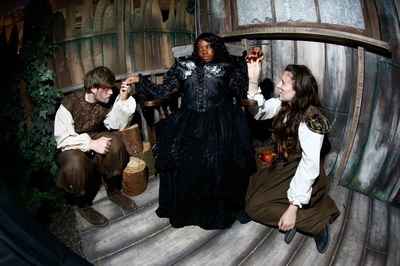 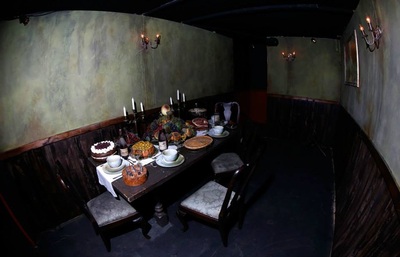 On first sight, hidden house is a large, impressive wood-like build next to the food court of Westfield's Stratford city shopping mall.  Straight away you are met with an eery, mysterious & atmospheric feel - created by the music with an occasional scream or shriek thrown in.
A lot of design, thought & expense has obviously gone into the planning and the expectation of large crowds is clear as you are met with 3 ticket booths to collect or purchase your tickets.
There are different levels & prices of ticket depending on the time of day and the intensity of scare you will experience... The later the scarier!  I visited at 18.30 on a week day prior to christmas.   I crave the ultimate scare so my expectations were high from first impressions!
I joined the queue which was surprisingly short- only 3 people ahead of me.  We were soon joined by 4 more and the actor on the door notified us that 'someone' would be along to collect us momentarily.
Once inside we are briefed and then lead out through the trees to a log cabin entrance.  The costumes, props and set are second to none & much superior to those at many halloween events.
Once inside we are met by a female actor who informs us that there were more but 'he' took them so now she is alone.   She moves confidently around and is professional enough to make most of us feel quite uncomfortable. She urgently encourages us to move on as 'he' is coming!
We then enter a dining-like room with several possible exits.  Our host is slightly crazy and unnerves our group with her strange comments & reactions.  She splits us and sends us on our way.  From this point you are left to navigate with no real direction & I'm sad to say- lack of scares!  There are the obligatory dark corners which prepare you for an impending fright but it just didn't come.
As the group reassembles we find ourselves in an incinerator type room- again with impressive special effects. A secret door revels a tunnel of limited space to lead you to what sadly turns out to be the last room.  Of course here, you meet 'Red' who isn't as nice as the fairy tale we all know and love! After telling you more about this alternative tale, she gets impressively close and accurate at hitting out between the group, making 2 ladies jump. Red starts shouting that we must run before 'he' finds us!  We then burst through the doors to arrive back to the ticket kiosks and where there would hopefully be other victims waiting to go in.
I left feeling it was all over rather quickly & if I'm honest I would have liked to have had a wander around to see if other unseen rooms existed within the structure.
In my opinion, the groundwork and design are fantastic.  The actors were well recruited although perhaps not enough of them haunting us on this occasion.
I hope it will return with a bigger impact.

For the money paid it was all over too quickly. The Health and Safety Rules and Regulations talk at the beginning of the 'experience' seemed to last longer than the experience itself!

The actors tried their very best to create an aura of fright but by the time the experience started to become scary it had ended.

Overall I felt a bit rinsed, I paid £15.00 for me and my daughter and it was all over in around 5 minutes. When you think what you get for your money at The London Dungeons, The London Tombs, Warwick Castle, The Ghost Experience at Arundel etc it really hits home that A Hidden House is actually a rip off...