The Generation of Z

Billed as "an immersive theatre with guts", The Generation of Z first debuted in New Zealand in 2013 and ran to almost sold out audience for 2 years. But the team behind the show knew that they couldn't contain this unique piece of theatrical scare entertainment, so started to look for other places to bring the infection. Fortunately, through the use of a Kickstarter fundraising campaign and some serious sponsorship, it was decided that the next step on the tour would be at the World's largest arts, comedy theatre and music showcase - the Edinburgh Fringe. With enough money to cover the flights and accommodation for the key creative team, they had to recreate the phenomenally successful New Zealand show in a small outside courtyard and underground car park. With just three weeks build time before opening, the team worked tirelessly to create an incredibly
atmospheric and immersive set. The rest, as they say - is history...

The Edinburgh Fringe has seen it's fair share of unique performance over the years but nothing could have prepared the audience for the unique style of story telling and visceral  performance of GOZ. Within days of opening - the show was being touted as the must see show of the festival and within a week, extra dates had been added to try and keep up with demand. As it is - with over a week of performances left to go- the event is now a full sell out and bulletin boards are filled with people asking if anyone has a ticket to spare.

But is the show worth all this hype and excitement? Quite frankly - yes it is! The Generation of Z is one of the most exciting and terrifying experiences we have ever done, and even now - a few days later we are still buzzing with excitement at the things we saw and experienced that night. The Generation of Z will be with us for a very long time!

So what is the show you may ask? With the abundance of zombie events out there it  would be very easy to categorise it as just another show where we have to run away from zombies. This is where The Generation of Z excels . From the opening scenes through to the absolutely chaotic finale, this show is fully scripted, fully
controlled and knows exactly what it is dong to instil fear into its audience. In fact most of the story could have been presented on a stage with the audience watching from a distance. There is drama, comedy, mystery and action all played out before us.


Where of course this differs so much, is that WE are part of that action. The actors interact with us, at times they push and shove at us and they certainly shout at us as we are moved through the scenes of the show.At times we are asked to help make decisions that affect the storyline and we are used to barricade doors, search for equipment, make solo surveillance runs and so much more. The more you want to get involved with the story - the more the actors will use you and the best way to fully enjoy everything about GOZ is to just go with the flow.

About half way through we were asked to make a big decision about which route to continue down, and past this point the story cut into two completely separate experiences that were cleverly linked via CCTV footage and constant walkie talkie communication. We could see what the other team were up to and they could see us. Each scene was different, yet complimentary to the other, and our only real regret from the show is that we didn't do it twice to see both sides fully.

By the time the whole group have rendezvoused back together, the situation is critical and through some political shenanigans, some medical experimentation and an unexpected explosion, we are barricaded in a room with zombies on all side. Escape seems futile and as the swat team guiding us start to fall apart themselves, a set piece (only hinted at in the teaser trailer) left us genuinely cheering one moment then open jawed in shock the next. The fact that the show can swing from gung-ho gore one minute to genuine heart stopping pathos the next, shows just how believable the actors and the scripts were.

Its worth mentioning here the quality of all the acting talent working the show. The main characters are
believable throughout and the zombies are fast and furious. The key soldiers ( Benjamin Farry, Simon London, Bree Peters, David Van Horn and Arlo Gibson) all play their parts as if they were born into them and mention must be made of Van Horn's character Moose, who goes from argumentative trigger happy marine to a genuine character of sympathy at the end. We certainly weren't expecting his character arc, and with his crazy beard and mohawk hair he truly was a character to watch!

All of the actors were armed with realistic weapons that fired genuine blanks and every time a weapon was fired in the enclosed underground spaces it would make the audience jump as it was so loud, The weapons, the
costumes and the sets all added to the total realism throughout.

But of course where were we? We were trapped by the advancing horde, not everyone had survived and there was only one way to get out. What should we do? Well the obvious option was to run!. Pushing and shoving to get through the door we were left with a final scene that left us all panting with fear, dodging the un-dead, while assaulted by strobe lighting, special effect smoke and marines with machine guns. With the strains of the Generation of Z music pumping out around us, it was like something from a Hollywood movie as we finally burst back outside to a big round of applause.

At nearly 90 minutes worth of action, the Edinburgh Fringe version of the show was fantastic value at just £12. We understand that some of the more technical aspects of the show have had to be dropped to keep within the budget and having met with the creative team afterwards we understand that this should all be reinstated when the show returns to the UK later this year.

Having survived the show - its easy to see why it has been the hit production of the Fringe. It is fast, funny, clever and at times genuinely terrifying. The whole show exceeded expectations with the incredible attention to detail throughout. In fact, there was so much going on that we haven't even mentioned the zombie on a chain, the military vehicles, the gore, the man in his pants, the chainsaw and so on and so on. To find out how these all fit into the overall story, then you'll have to visit the show for yourself when it returns. In fact when they announce
tickets for the next one, we would recommend you fight as if you were in the zombie apocalypse itself to get a ticket. As they WILL sell out again and we would hate you to miss this!
For more information check out their website http://www.thegenerationofz.com/
The following pictures are just a sample of the attention to detail evident throughout the show 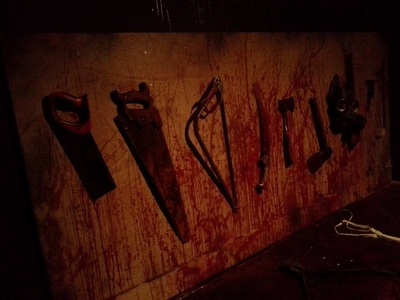 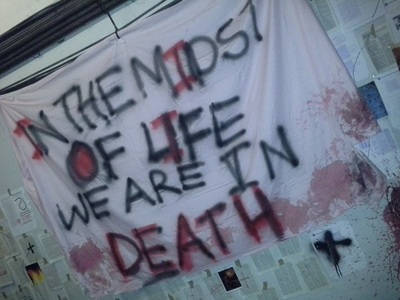 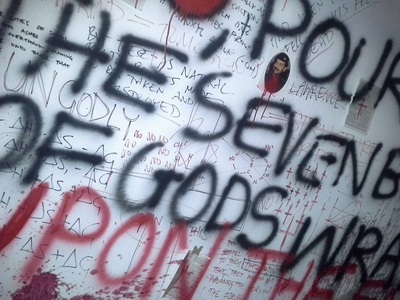 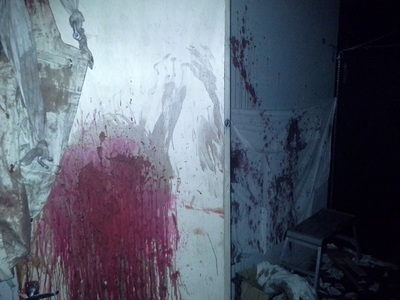 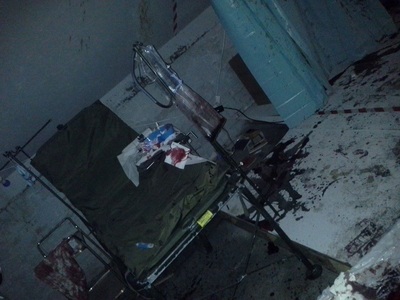 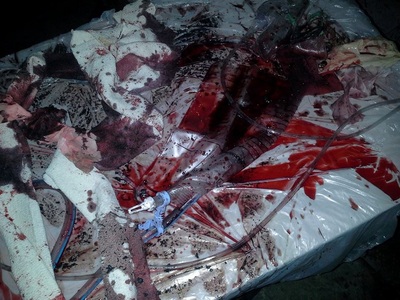 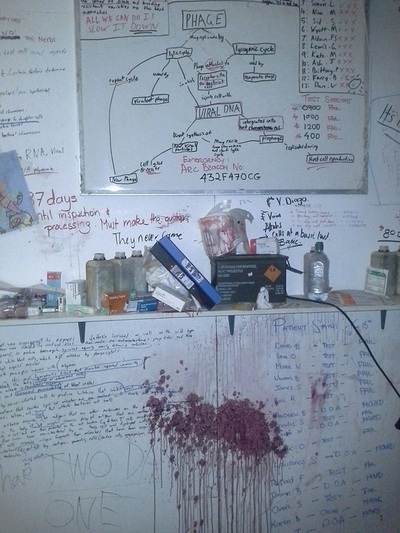 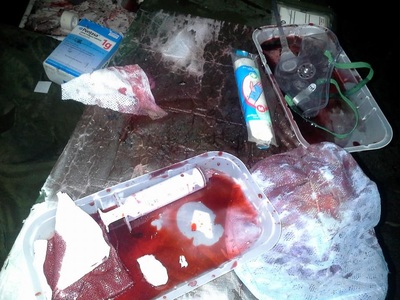