The Clinic at Walibi Holland

WARNING - this review is full of spoilers and gives away the whole story of The Clinic at Walibi Holland. We have decided to share this so people who may never get to experience it, can see what a cool concept this "brave it alone" experience was.

Very rarely do I get nervous before heading inside any form of attraction, but I was for The Clinic.  It had been shrouded in secrecy from the initial advertisement on the website - was it an alone scare attraction? Was it an escape room? Was it an extreme haunt? The answer is none of the above, it was so much more…

So, after signing the usual disclaimer stating that we had to sign over our lives (in essence), I was thrown into the first. Rightly lit, unbelievably clean scene that truly did feel like a reception of a Clinic.  A female orderly met me, explaining that the 'safe phrase' was 'I want to wake up', this little snippet was gold, explaining the entire narrative in five simple words.  She took my photo for my ID and sent me on through the attraction.

I was pushed into a dirty waiting room and was met by a rather rude Clinic staff member that ordered I take my socks, shoes and coat off, placing them into a white bag and handing them over.  She took hold of my arm and brought me into a ward that had several gurneys in - at this time, I guessed what would happen… I was shoved on to the gurney, restraints were placed around my legs, torso, arms and head before a large plastic sheet was placed over my upper torso and off I went into The Clinic!  Fluorescent lights passed overhead as I made my way to surgery through what felt like a never ending  corridor, briefly pausing at the end before being pushed through a set of double doors.

The scene that followed was the start of my demise (narratively speaking of course), as I was placed under two HUGE surgery lights.  One of these gave off a slight reflection to see what was happening and this little touchable such a difference.  I was injected in the neck with some liquid and the surgery started, cutting my stomach open before the heart rate monitor started to become erratic and the room plunged into darkness - I had died!

Quickly wheeled from the scene into a freezing cold mortuary room where there's a fantastic unexpected jump scare and now it's time for my embalming!  I was washed, sprayed and shipped off to my own mourning.  The next scene was one of the most haunting I've had in a scare experience before.  The top half of the gurney was raised and I was in a funeral home looking at a picture of myself atop a fireplace as my loved ones surrounded me in mourning clothing, crying and holding my face for what felt like an eternity - even writing this review it's sending a short down my spine and giving me goosebumps, absolutely genius!

What follows the funeral home? Burial of course, so that's where we headed.  In darkness we were placed into half of a coffin, just enough light passed through to show you were you were.  From above, through a small Perspex window you could see the grave heading high into the ceiling, and then the dirt started.  Shovels of dirt ere thrown on to the Perspex and they started to bury you alive - it was unbelievably claustrophobic as the light started to disappear in such a confined area.

Quickly removed from this, we entered a room that was completely out of place of the other rooms, a bright white scene with heavenly clouds and angelic music.  That didn't last long, though, as smoke filled the air and the room turned red - that's right, it turns out all of the bad things I've done in life have sent me right to hell… I knew it!

Satan himself popped overhead laughing in my face as he wheeled me into a really (REALLY) warm pitch black room.  Is this really what hell is like?  If so, I could spend quite a lot of time there as it was rather cosy compared to the freezing temperatures of outside.  But my calm cosy experience wasn't going to last long as 6 huge towers of fire lit on either side of me and let me tell you, it felt CLOSE - I was genuinely terrified.

Following my incineration in hell, I was wheeled into another pitch black scene as the sound of a defibrillator warming up was heard and 'clear', before BOOM, I was hit in the chest, the lights came on and I was in the very first room again (or a clone of it).  My belongings were handed back alongside an on ride photo, before I was ushered out the door and my journey through The Clinic was over.

One of my main passions in life is theatre, and that's just what The Clinic was.  A haunting tale of your very own demise portrayed through immersive theatre.  If you're heading in this attraction expecting it to be terrifying and hands on, you're going to be sadly mistaken, but if you enter expecting a really fun, intense and psychological experience, you'll leave thinking it's the best thing since sliced bread (just as I did).

Very rarely has an attraction left me thinking about it after I leave the park, but this did.  I couldn't stop talking about it to my friends who also visited and we're all in agreement that it's one of the most creative attractions we've stepped foot in.  The detailing and theming was absolutely perfect, the story and structure of the experience was second to none and it had just the right amount of intensity and hands-on.

Please visit the attraction if you can, you won't be disappointed - I'm already planning my trip back! 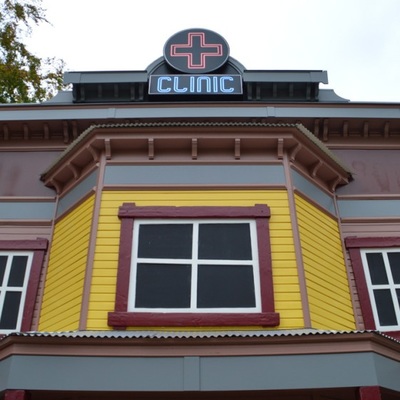 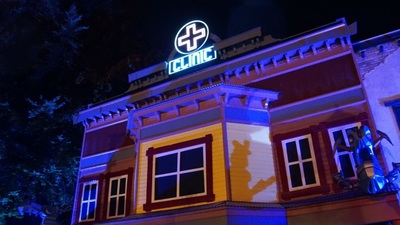