Oxford Castle is an imposing structure right in the heart of the city and is a popular tourist attraction with its tales of history of torture, execution and incarceration . Of course any building with such a colourful history is bound to be haunted and the castle is a popular venue for ghost hunters, ghost tours and the like. In fact, it's so popular that during the months of October and November, the castle holds the annual Ghost Fest (now in its 8th year - see more details below)

In 2013 a new event has been added to the line up - Terror Tuesdays - which promise a "Haunted house with no boundaries" and  the chance to experience "genuine horror, flesh crawling encounters and unimaginable brutality". Unfortunately when we went we think someone forgot to tell them it was Tuesday!

In a small group we were first greeted by two exceptionally creepy guys in gas masks who, after a brief safety warning, made us all don surgical masks to protect us from any the dangerous dust along the way. What then followed was a very creepy walk through some exceptionally dark parts of the castle. Up and down narrow stairs and through ancient cells, passage through the attraction was slow as we tried to figure where we needed to go. Any strange noise in the darkness left us wondering what was around us and a few sudden appearances from the couple of actors in the castle made us jump.

At one point we were shown a couple of factual elements including the original lever used to hang people and most importantly the photo of an 8 year old girl who had once been incarcerated in the cells. We thought this was setting us up for a potential scare from a little girl ghost but unfortunately that was just wishful thinking. In fact the whole experience was missing a number of great potential scare situations:

One of the darkest sections of the attraction involved us fumbling our way round the 900 year old crypt in the basement of the castle, In the dark and smoke filled atmosphere we could just make out several figures which had us on edge wondering if they would move. It turned out they were just waxworks! Again this section could have been incredibly intense if some real actors had been used. As it was, very soon after, we were back upstairs at the gift shop with no particular finale or pay off to the experience. One minute we were walking in the dark and the next we were back in the day light wondering what had just happened.

The tour itself was a strange mix of theatrical storytelling, some intense periods of walking around in the dark and a few special effects and sounds (although we still don't know what the Austin Powers style music in one of the earlier rooms was meant to represent!). All in, we really think that this event has missed the opportunity to be truly scary. The venue is one of the most amazing buildings we've visited for a long time and although we did jump several times the tour just wasn't as terrifying as marketed. 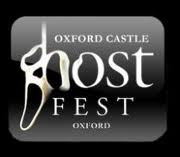 Terror Tuesday is just one of the events at the Oxford Castle Ghost Fest. Running throughout October and November, the castle will also host

Further details can be found on the website - www.oxfordcastleunlocked.co.uk