It's very rare to go to a scare event where you cant decide which is the best and which is the weakest maze. But after a night at Terror Island, and following a lot of discussion between the team we are still so completely undecided as to which maze at the event is the best - they are all EQUALLY as amazing as each other!

Which is no mean feat in it's own right, as each visit through each maze brought an insane levels of scares and confusion. Everything from the sets, through to the actors and the timings of their attacks, brought an assured scariness that we would expect from a team that have been doing this for years.

As it is - the mazes were designed by AtmosFEAR Scare Entertainment in 2019, but the team at Blackgang Chine, have opened and staffed these mazes completely independently for 2021. So yes, they had a great foundation to start from - but the fact this year's event feels stronger than the debut year, is a real credit to the passion and enthusiasm of the team for their event.

The three mazes are very different in their own right - Hexcavation is very tight and claustrophic, with crawl spaces and a tightly packed corridors. Amphibious relies on multiple scares throughout the beautifully themed rooms (especially in the water swamp section where the actors seemed to just loom over us out of the "water",) and Blood Shed involved some up close scares alongside some tongue in cheek humour, as the cannibalistic family hunted us through the shed. Each maze was perfectly brought to life by an enthusiastic cast, who were relentlessly vocal and physical throughout. They also taunted us mercilessly at the start of the event as we waited for the mazes to open!

The event has live music and a DJ that  rotate through the night and a series of dangerous stunts and circus acts are played out on the lawn area (just be careful about you might get yourself volunteered for!)  Food and catering options include include a cocktail bar serving cocktails made with local Isle of Wight Gin, and a catering stand selling the likes of loaded fries, nachos etc. There are also a couple of rides open for those wanting to brave them in the dark!

It's not difficult to see that we had an absolute blast at this years event, and we are sure the public will love it as much as we did when it opens this week. It really is rare for us to visit an attraction, or write any sort of review without some sort of constructive comment for balanced reporting, but we can genuinely say, hand on heart - that Terror Island is the perfect little scare event. Yes it might be inconveniently located on an Island, but the ferries are plentiful, and we don't regret a single penny we spent traveling to this incredibly terrifying event. 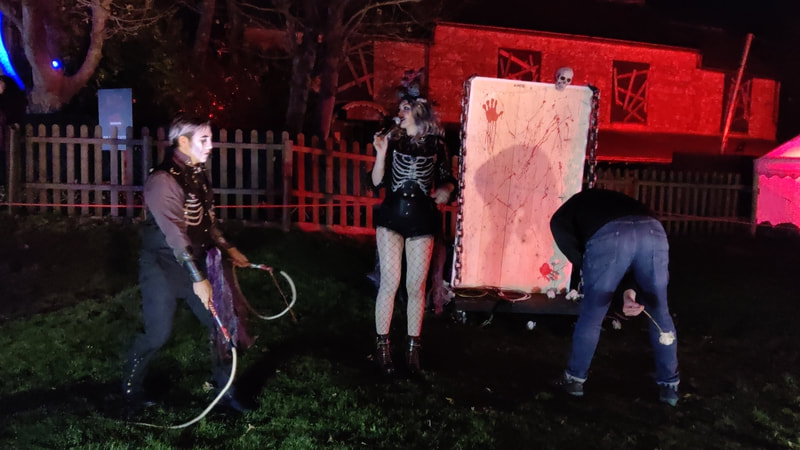 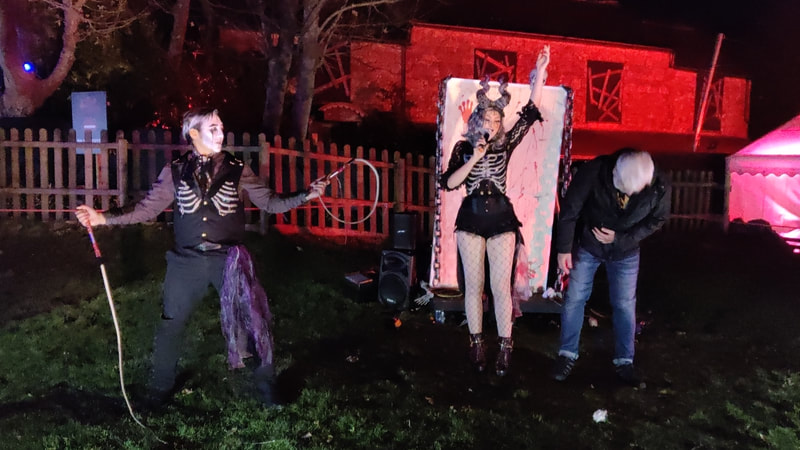 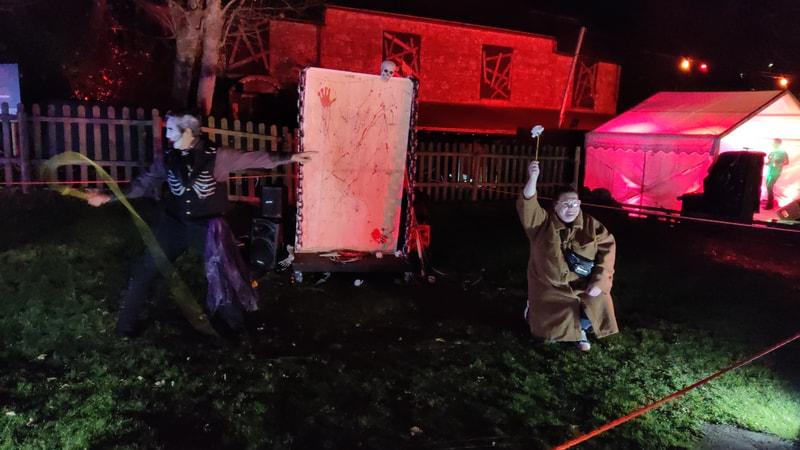 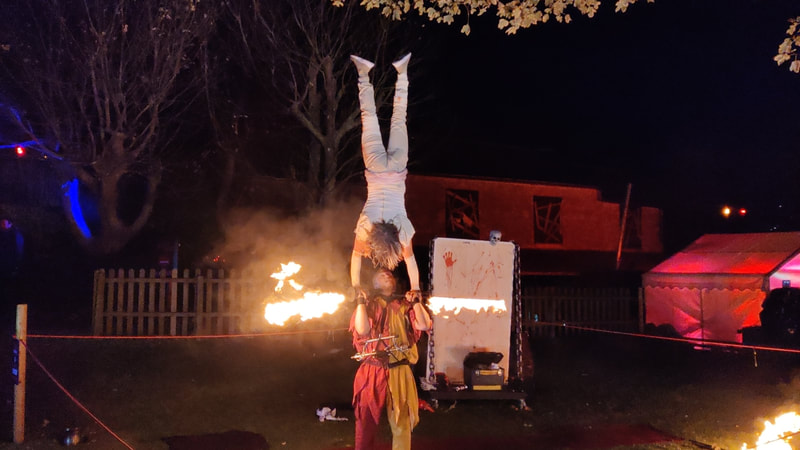 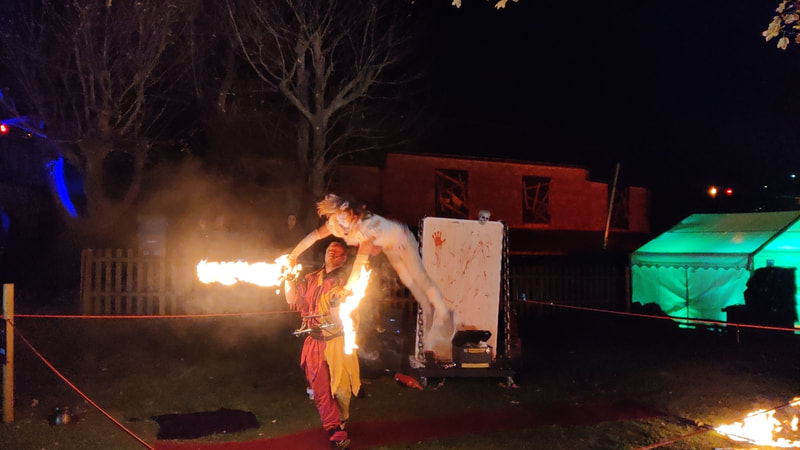 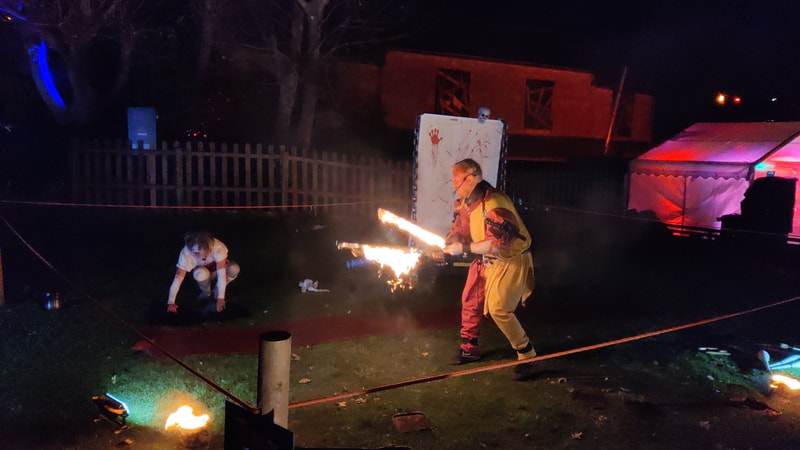 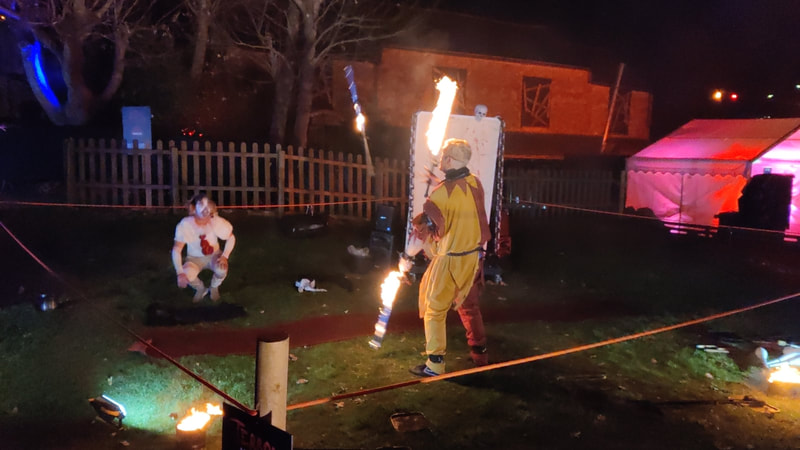 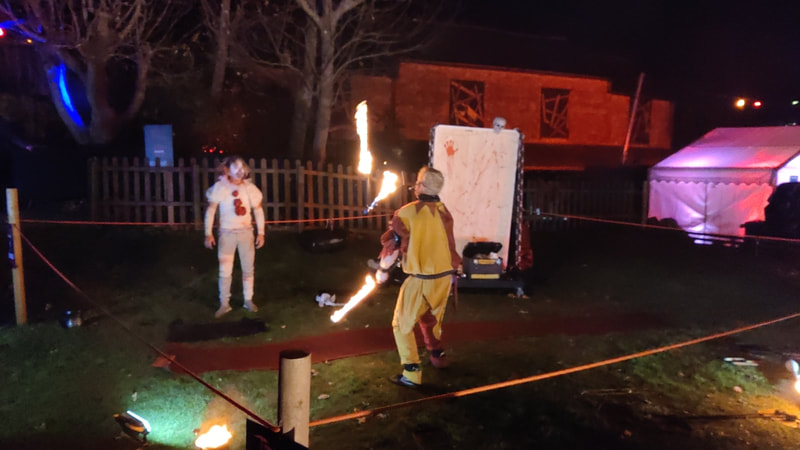 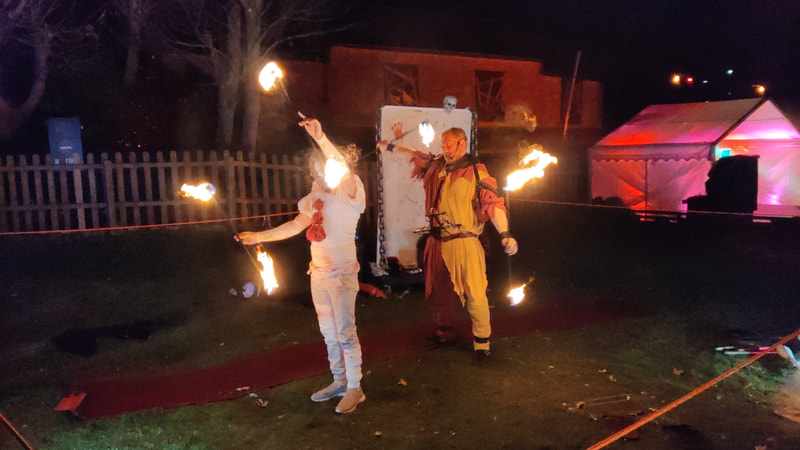 Blackgang Chine is a family amusement park located on the south of the Isle of Wight. Last year they entered the Halloween market with the debut event - Wicked Nights, but for 2019 they have taken an even bigger jump, and re-branded to Terror Island, with the addition of three brand new mazes from AtmosFEAR Scare Entertainment.

The Terror Island complex is located at the back of the park and is easily accessible by its own entrance. It generally uses buildings not open to the regular theme park user, in addition to several rides such as the Cliffhanger roller coaster and the WaterForce water slide.

Once through the main gates, it is clear that a lot of effort has been spent in making the central area welcoming and well themed. Dramatic lighting accentuates all the buildings, and empty spaces are randomly punctuated by bursts of flame. The main hub has a food and drink hatch (we can highly recommend the nachos) as well as a covered sitting area where resident DJs play high energy music to keep the atmosphere electric. From this main area it is easy to access the main three attractions.

We started with Hexcavation, which has a dark, urban explorer/archaeology vibe, as we investigated a dark and foreboding temple. The pictures below show how detailed the main facade is for this maze, and the attention to detail continues inside. The actors in here were pretty relentless and managed to scan us multiple times as we ducked and crawled our way round. Interestingly - outside the maze there was a test tunnel to see if guests were able to squeeze through or not. This was a great idea as we have had instances in the past where someone of a certain size has been unable to squeeze through certain elements.

As we reached the end of the attraction we were asked to take a seat and keep out feet tucked in, which immediately brought to mind the tactic that is used for many of the Dungeon ghost shows. As the lights plunged into darkness we expected a sudden appearance by a solo actor, so was very surprised to see such a multi actor attack!

Our next maze was Amphibious which was beautifully themed around a sunken ship. The opening monologue suffered from AtmosFEAR's insistence on playing loud music at full pelt whilst an actor is forced to shout to be heard. It's a simple thing to fix and something we saw a lot of this year. Once inside we were attacked by different sea creatures which was completely different to just having snarling scare actors popping out. Each new scene and scare left us smiling to ourselves, while we externally screamed and jumped. We must also mention a very popular swamp affect as first seen in the Witches at Tulleys. This effect had become a bit commonplace so it was brilliant to see it in a  different colour. The bright blue of the laser, genuinely conjured up images of water, and we loved the way the scare actors emerged through the beam as if they had just surfaced from the depths. It was a really nice effect and fitted the story perfectly.

The final maze was called The Blood Shed and features a pretty standard bunch of carnivorous residents trying to make dinner of our limbs. Although nothing original - this maze stood out due to the detailed theming - especially as most of the walls and rooms were genuine brick walls in the old mill. The actors were totally engaged throughout, and we also loved how they all seemed to get multiple scares across the group, making us feel that the acting cast was much bigger then it really was.

One thing we must point out is that we visited on a Tuesday at 6pm, and the park was so quite that at times we felt like the only people in there. Which is such a shame, as the product is very strong and deserves to be seen by many more people. We hope this is just  a timing issue, and the event is hugely popular this year. We cant wait to see what they come up with going forward, as this is definitely an event to look out for.