During a recent day out in New Brighton, we went along to the dockland front to try out Terror 13. We knew the attraction was there and hadn't really heard much about it, but following their spectacular costumes and characters at ScareCON, we were excited to see what the show would involve. If you can imagine The Hills Have Eyes meets Wrong Turn meets Texas Chainsaw, then you’ve pretty much got it!

As we stood on the street, we could hear screams coming from inside which started to put us on edge. We nervously knocked on the front door and a larger than life character flung the door open. We could only describe him as some sort of inbred type with a southern American accent. He was certainly pleased to see us and told us to wait while he “finished” with the current guests. The guests were two females who ran out screaming, desperate for their tour to end, literally shaking and telling us not to go in. We were now definitely worried.

Inside the dark walls of Terror 13, an old lady sat at the admission desk, and after taking our money, instructed the other characters to take us to meet “momma” and for them to not “play with their food” along the way. Down the stairs we went to start our underground tour.

A vast array of nasty characters were waiting for us inside. Every one of them played their part really well. The actors were relentless and with just two of us in our group, the experience was pretty intense with sometimes up to four characters threatening us at once.

Half way through we finally met momma and as you would expect she was very protective of her inbred, mutant family. From then on the crazed characters kept us on edge throughout the tour and the momentum never let up through the disorientating, dark tunnels. In the darkness we could we could see that the sets were really well detailed as were the costumes, masks and make up but we were usually too busy screaming!

The whole experience brings you into contact with every member of the crazed family as well as a soldier trying to aid you in your escape, some really disturbing life size dolls and countless victims begging you to help them. Every single one of the actors did an amazing job and were thoroughly believable.

The whole experience last about 25 minutes and during that time we were separated, involved in scenes and forced to watch as victims met their fate. It was very interactive throughout and we were impressed that every staff member played a part. We didn't see anyone walking round in plain clothes,  so the tension and atmosphere was held from start to end.

We would highly recommend a visit to see the crazies of Terror 13, it’s an approximate half an hour well spent, and at £7 is great value for money too. 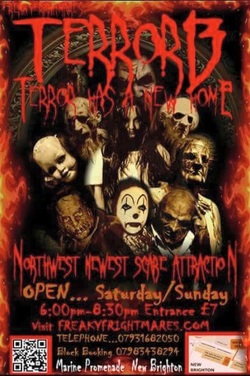 Scary - I'm not an easily scared guy.  I was a bit reluctant to go at first. My family and friends talked me into it.
I'm so glad they did now.
The people who run this place have done, and still do an awesome job.  The decor, the atmosphere, THE PRICE!! Not forgetting the actors, All together this accumulated to one hell of an event.  No...... Hell is too tame - See it to believe it !!!!!

Terrifying - This venue is hidden away, which is a shame. I liked it that much, I've been back since. At only £7 it's very much value for money. A lot of hard work goes into this show and these guys truly love what they do. It's fantastic and I would very much recommend taking a trip there, if you dare!!!!!