The Sunken Village of the Damned - Bucaneer Bay

The Sunken Village of the Damned is Cornwall's first scare attraction and is located within the Buccaneer Bay Pirate Adventure in Newquay. The attraction was created by AtmosFEAR! Entertainment for a 2010 Channel 5 programme called "Duncan Bannatyne's Seaside Rescue". Three years later, how does this often overlooked attraction stand up?

We must first mention that we visited out of season and the whole sea-side town of Newquay was rather quiet. In fact we were surprised to find the whole show open but several families went through while we were present. Upon entering the Buccaneer Bay building it is obvious that families are their target audience, with big colourful pirates on a bright blue building. In fact, you could almost not even notice that a scare attraction lurked within those four walls.

After our tour of the Buccaneer Bay segment, it was time to enter the Sunken Village. Strangely we had to walk up the steps to the village but here was where we noticed the atmosphere change slightly. With darkened corridors, smoke and lighting, it had all the standard elements of a scare attraction, however it lacked something very important - actors! The whole show had just actor to scare us and it didn't help that he was the same helpful tour guide who had given us our guided tour throughout the Buccaneer show downstairs. We had already warmed to his jokes and witty banter meaning that his job of trying to scare us was made extremely difficult. He did however do a great job of keeping us engaged and he stayed in character throughout.

Unfortunately, The Sunken Village just didn't deliver what we had hoped. We understand that its a scare attraction aimed at families and that the season had not quite started, but to run the attraction with only one actor was a complete waste of time. Just one more actor would have made the overall experience feel a lot more immersive with a lot less stop/start moments. As it was we would often move forward faster than the actor could get into his next position, meaning a lot of back tracking was involved.

After speaking to the management, we were advised that that the maze is actually supposed to accommodate 6 actors, which would be amazing, so a visit during peak sea-side season could prove to be a trip worth while. However for now, The Sunken Village of the Damned should probably remain underwater if it can only offer one lost soul for entertainment. 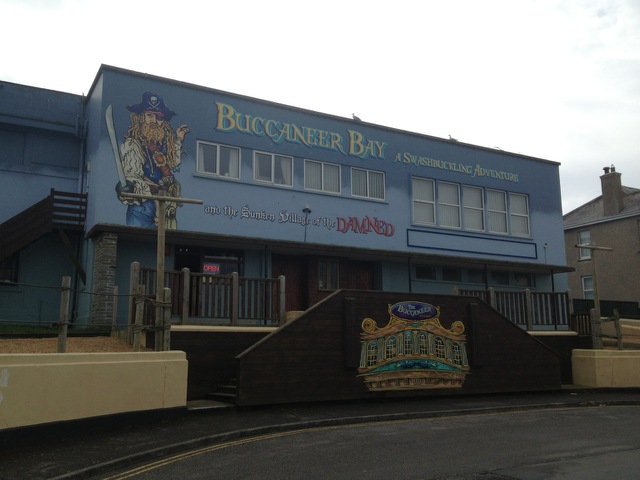 Have you also visited The Sunken Village of the Damned? - tell us what you thought here