Here at ScareTOUR, we wouldn’t normally review theme park rides but Nemesis: Sub Terra is a mix of ride, theatrical presentation and scare maze – all rolled into one. In typical Alto Towers marketing the attraction was first billed as the most terrifying psychological thing to be built at the park, and on opening day the experience was nothing like it. Some of the story about what was happening was unclear and many of the on ride effects weren’t working. Many of those who queued 2 hours on opening for the ride were left very disappointed.

Over time, the park realised that the attraction was missing that certain something and even once all the effects were working, the ride experience was clearly not the experience that had been hyped. To make up for it a few extra rooms were added to the end of the attraction to make a scarier and more frenetic finale. As time went on more cut throughs and scare-holes were made in the cages in the final scenes to really allow the actors to get up close and personal. It was this experience with all effect working that we got to review this week.


It’s very hard to sum up the whole Sub Terra experience into one sentence. It is clear from the beginning that the whole thing has been designed to scare and intimidate the visitors and this all starts off well with the rude and quite abusive operational staff dressed as military personnel. From the first room in – people are on a heightened state of alert as to what is going to happen and therefore the fact that the first “lift” doesn’t really do anything is a bit of a disappointment. Fortunately a well placed actor usually got a scare from the lift occupants each time!

The main ride chamber is actually a clever piece of deception. The ride itself is just a themed version of the Extremis ride found at many of the UK Dungeons but is less obvious as a drop ride due to unique loading system. Once strapped in, what follows is a pretty standard “something goes wrong” scenario, but the way it is executed is very impressive. Using sudden movement, water, blasts of air, in seat effects and moments of pitch darkness, the ride chamber rang with screams from all sides!

With most rides, once the main sequence is over and the harnesses are released, visitors are left to walk out the exit and head back to normality but Sub Terra has a few more tricks up its sleeve. Trying to engender a sense of panic, guests are bundled out of the chamber into another elevator waiting to take them to safety. At this point even more chaos breaks out.

The final scenes once out of the elevator are the ones where the real scares and frights take place. The lively bunch of actors appear to be everywhere and the corridors were filled with the terrified screams of people who weren’t expecting a mini scare attraction to be part of their ride. People usually ended up running out the exit to escape!

Now everything is completed, we really enjoyed the latest version of Sub Terra and each time we did it we found it just as scary. It’s shame that the additions and changes were required to the original design and that those who rode it originally had a bad experience but it’s kudos to Alton Towers that they realised they needed to do something and have been prepared to extend the experience.

Until Scarefest comes along in October – Sub Terra is clearly the psychologically scariest attraction at the park and if they can keep this level of intensity up in the mazes then we should be in for a good Halloween! 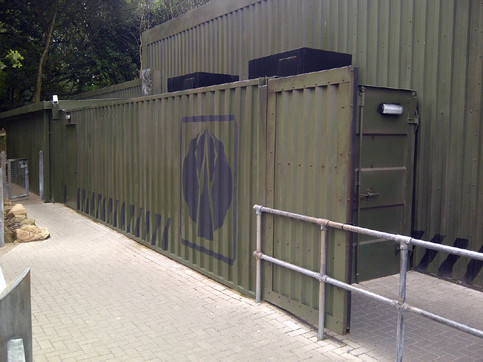 Extra rooms added after opening
For more info about other Alton Towerrs check out their website.

Have you also experienced the Nemesis: Sub Terra or any other of the Alton Towers Scarefest mazes? Why not leave us a review? Click here for more details.