While walking along London’s South Bank we were confronted by an eerie looking sideshow tent that was just begging to be explored. Adorned with colourful Mexican style “day of the dead” theming, the tent was guarded by a creepy carnival barker stood outside enticing everyone in…..

Attractions/performances such as this are best enjoyed with no knowledge of what to expect and Spidora was no different. This dark and twisted world was a sight for the eyes and the whole experience was a delight for all senses with just the right level of frights along the way alongside some exciting projection effects.

For a free show based in a temporary marquee, we were impressed with the level of ingenuity and theming that had been put into Spidora. Copperdollar clearly have a love for horror and we look forward to visiting other installations by the talented team. 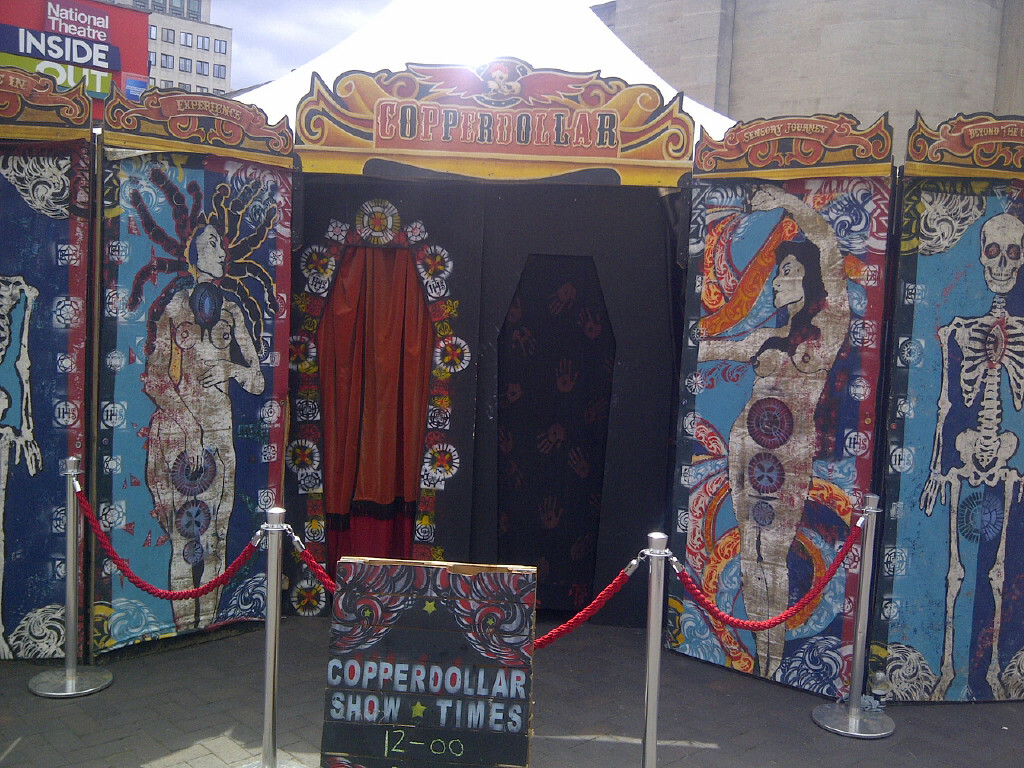 Spidora ready to intrigue and delight on London's South Bank
Copperdollar were set up in 2008 after receiving an Arts council grant to help them develop immersive theatre. Since then, they have enjoyed creating “theatrical dreamscapes that collapse the wall between performer and audience. Inspired thematically by Samhian and the Mexican Day of the Dead, Copperdollar’s shows celebrate life, whilst exploring the concept of the afterlife"

Katie Simpson: The inspiration came from the fact that I am born on halloween, and I was getting fed up of the commercialism that is now caught up around this festive time. I started to research its origins, and discovered the link to Samhien, the ancient celtic celebration, which was much more about remembering the dead, and welcoming them back, as they believed the veil between the two worlds was at its thinest. It was so similar to the Mexican Day of the Dead, that I decided to create a show that was about celebrating life, whilst remembering and honouring the dead, and so Copperdollar came into being.


ST: Your work is very interactive. Why is this?

KS: My work has been inspired by the desire to immerse the audience in the worlds and stories I create. My performance background has been in circus, street theatre and cabaret, where you are much closer to your audience. I had been performing for 25 years before going to do a degree at Brighton University in Dance and Visual art and whilst on this course I started to look at how I could integrate my audience with my work, so it became more about a physical or sensory experience rather than a passive voyeuristic one.

ST: So what type of shows do Copperdollar do?

KS: Our shows are immersive performance/theatre productions that blur the boundaries between audience and performer, encouraging people to become involved and play.We merge the worlds in more ways than one to create an interactive dream-scape with a hint of horror


ST: What's next for Spidora and/or other Copperdollar productions?

KS: The only date we have booked a the moment is for Bestival in September, but we are looking for more bookings and hoping to get the bigger show out around Halloween. We are always looking for opportunities to show Spidora so if you know of any good places it would be very welcome. Thanks for including us on your site and we'll keep you posted of anything new.

For more details of Copperdollar's productions check out their website

Have you visited Spidora or any other Copperdollar installation? ? Why not leave us a review. Click here for more details.