I am a fan of the Secret Cinema experience, having previously visited SC’s tent pole Back to the Future and Star Wars events. So when I heard the group were turning their collective hand to horror, I knew I needed to get onboard.

The secret location of this latest production, Danny Boyle’s seminal Brit zombie flick (I know they’re not undead, but come on...) near Canada Water Tube station will be familiar to those of you who attended last year’s Empire Strikes Back, and it fitted the film perfectly. As is often the case with SC events, after registering to attend, we were given plenty of online updates, from health alerts on the spread of the Rage virus and vaccination programme from the NSH (not to be confused with any real life National Services that handle Health issues, oh no) and live reports from the BBCC (also not to be confused with any real broadcasting companies located in Britain…)These videos are wonderfully done and really do set the mood, while incorporating some nice in-jokes.

As was also the case with previous SC productions, we were given a costume and list of props to bring along with us. These included a set of surgical scrubs, a blood sample, and anti-viral mask among others. Cynically, Secret Cinema sells a pack that contains these items, but you needn’t buy direct from them and a quick trawl of the usual online outlets yielded more affordable alternatives.

So, dressed in the appropriate attire, our group headed to ‘St. Thomas’ Centre for Disease Control’ for our vaccination appointment. Upon arrival we were greeted by armed military personnel who checked our papers (while remaining in character throughout), then ushered us into the centre. Inside we were immediately blown away by the scale of the production, with a large triage unit set-up in which we were debriefed.

After a chat with a very talented actor portraying the chief doctor of the ward, we were given time to use the toilet and imbibe a couple of ‘vitamin supplements’ (pretty tasty cocktails served in specimen bottles!). In time we were called through the plastic tunnel and into the quarantine zone for the experience to truly begin.

What followed was the most enjoyable segment of the evening and while I don’t want to ruin the surprise, I will say that it was every bit as imaginative as previous SC events, and surprisingly intense. With little time to breathe we were quickly guided through a handful of locations and scenarios that will be very familiar to fans of Boyle’s film. The cast here were excellent, the attention to detail VERY impressive and the intensity far beyond that of any previous Secret Cinema experiences.

However, a word of warning. We were told in advance that we would need to be prepared to run but I’d no idea exactly how much running would be required. What’s more, there were plenty of stairs to tackle as well, so less mobile attendees or those with physical conditions that could be exacerbated by exertion may struggle.

Finally we made our way to a new section (complete with a new cast of equally impressive actors), which, unfortunately, was something of a mixed bag. Our group was split in two and sadly, it seemed the other group had a far better time than us. The problem seemed to be a comparatively small area and cast and probably a few too many attendees, so the fun interaction with the actors was a little harder than in previous productions.

What followed was a lot of listlessly wandering around as we attempted to find fun missions to take part in — many of which fizzled out because the actors were too busy. Instead I had a couple of beers, used the facilities and unwittingly set in motion a massive part of the finale of the experience. Once again, I’d prefer to avoid spoilers, but I’m sure lots of you are familiar with the film and are well aware of what occurs during the climax. Let’s just say I wandered in front and centre!

The climax built into something I never saw coming, despite plenty of clues, and it was very well executed. Unfortunately, it did have the side-effect of reminding me precisely how old I have become (I remember dancing to the Prodigy in dusty old warehouses the first time round, which feels a lifetime ago now!)

Finally we moved into the screening itself, which really was brilliantly and imaginatively staged, with all the usual Secret Cinema touches of bringing key scenes to life live as they unfolded onscreen. It would have been nice to have a few more of these, but for the most part they were excellently executed, and each time the Rage infected actors were on hand they were genuinely terrifying to behold.

I needn’t say much about the film, I’m sure most of you have already seen it, but if you haven’t, THIS really is the best way to experience Boyle’s post-apocalyptic vision.

So is the experience a success? It is, but with some caveats.

First, let’s address the price. Over £70 (when you’re also including the various props and costume essentials) is a lot of money, and it’s a sum I feel is a tad excessive. What’s more the food and drink is also very expensive, so it’s a real wallet-buster of a night out. The props were also, by and large, entirely unnecessary. Sure the scrubs served as a handy protector for any ‘staining’ that might occur as the event unfolds (you’ll have to wait and see!), but I found NO use whatsoever for any of my other items. My advice is to just don the scrubs and facemask and forget the rest.

The production itself is quite fantastic, the cast are brilliant, the setting breathtaking and the imagination on display truly awesome. If it weren’t for that mid-experience lull I’d say it was an unreserved success. However, this segment was a little cramped, didn't afford enough interaction with the staff and seemed to exist purely to sell food/drink to the masses.

As interactive entertainment experiences become big business I understand that it will become necessary to charge more and creates ample opportunity to make money. Unfortunately, this is the first time I’ve felt that the organisers have been using it as a (albeit very entertaining) cash cow.

This admittedly large con aside, Secret Cinema presents 28 Days Later is still a great experience and did more than enough to warrant a positive review. Should the group return to horror in the future, I’ll be there in a heartbeat. 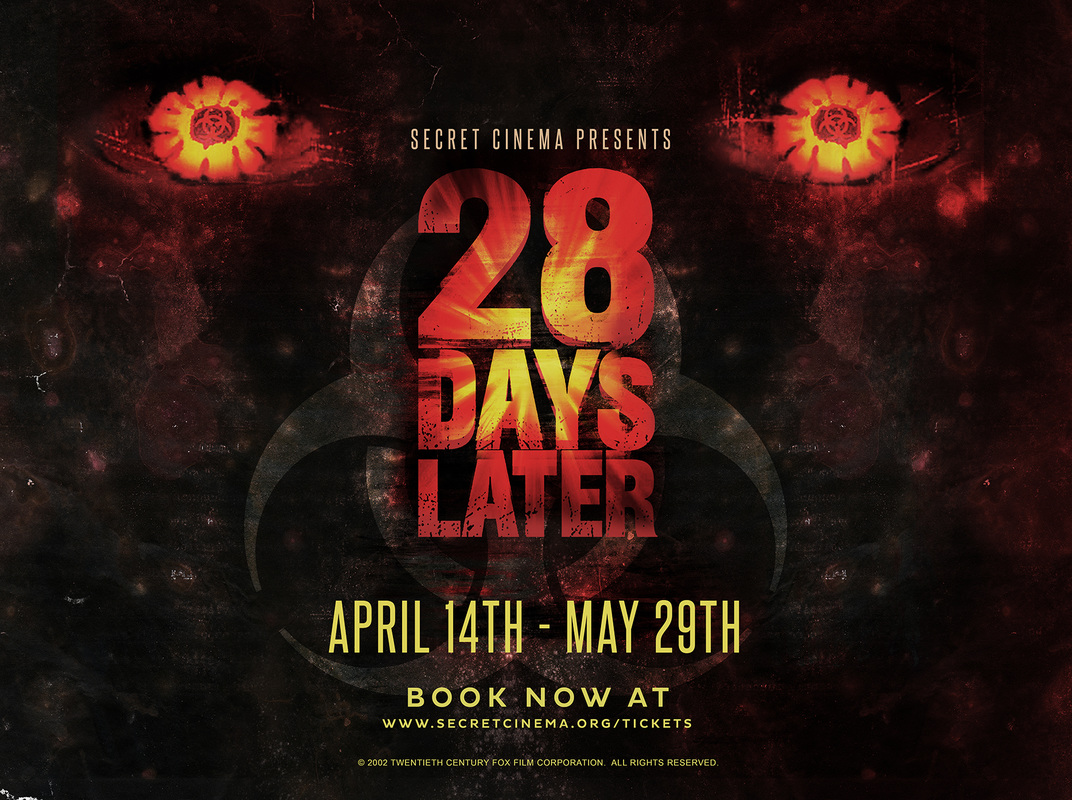