After a fortuitous meeting at ScareCON in 2012, the National Forest Adventure Park in Burton commissioned Andrew Porter to design them a new attraction to increase their Halloween presence. When they debuted Slasher alongside the new Screamfest branding, the park really made a huge impact. But how could they top such a dramatic entrance?

Now in 2013 the park is back with two new Andrew Porter mazes, each significantly larger and more detailed than Slasher.

Soul Seekers follows the adventures of a Most Haunted style paranormal team as they investigate a few mysterious occurrences in a grand hotel. From the outset, this has to be one of the most elaborate looking mazes we have ever experienced, from little touches such as the do not disturb signs hanging on all the doors through to the grand stained glass ceiling decorations in the ballroom. You would expect this level of detail in a large US movie park such as Universal Studios and not in a small farm park in Staffordshire.

But of course – a pretty maze doesn't mean anything unless the story and characters are believable and this is where Soul Seekers excels. The opening scene in the ballroom was a masterclass in scare techniques and set us up for the more linear attraction that followed.

One element that left us lost on a number of occasions was a very dark section where we had to feel our way through. Compared to the detail of the preceding and following scenes, this section stood out as almost being too dark and despite the attraction not enforcing the usual hands on shoulders formation, each time we went through we generally had to hold on to each other for comfort.

Towards the end of the maze, we could hear a voice in the soundtrack (vocals supplied by the incredible Gerry Cannel – the voice of Dr Kelman in Alton Towers' Sanctuary – that the “hotel was alive” This was achieved through the use of a couple of simple swing doors and some incredible distraction, meaning that most times we were able to wander back through rooms we had already visited – creating a real sensation that we were trapped and the house was blocking our exit.

All in - an incredible new maze that needs to be experienced.

It's very difficult to write about Nocturnal without giving away a major plot spoiler. The outside of  the attraction looks like an elaborate and sexy night club and as guests we were invited to enter the VIP lounge

What happens from then is a clever piece of misdirection which originally left some of us scratching our heads as the environment around us changed into something a lot more sinister. The first scene once through the door, is a powerful opener that sets up the story. Unfortunately an over zealous actor banging the cage door meant we were unable to hear the true nature of the impressive narrative on our first visit. After the main intro, Nocturnal is quite a linear maze with (mostly) just one route through although there was one room that left us wandering a bit (and the poor actor having to stay in character while trying to direct us away from the fire exit!) Throughout the maze we experienced a number of detailed sets, shocking scenes and high impact scares. Unusually, the maze made use of large amounts of water and at times we wished we had brought wellies with us. For an indoor attraction we were surprised quite how wet we got!

Planned as the main “terror” maze, Nocturnal didn't quite have the same impact on first run through as Soul Seekeers and it will be interesting to see how the general public take it.

When Slasher opened last year we were blown away by the attention to detail throughout and the quality of the whole show. In the second year we were hoping for something a bit longer or a bit different but what we received was the same show as 2013. Not that that is a bad thing – we were just hoping for something a bit longer this year. Like the other 2 attractions, Slasher starts with a detailed pre-show element before turning into a more standard horror maze. The execution (pun intended!) of the opening scenes and the timing of the actors has to be particularly praised and despite a small technical issue with the soundtrack had all of our group jumping in fright.

The problem with having 3 Andrew Porter attractions in your park is that anything that isn't an Andrew Porter show, pales in comparison. This years hayride uses a familiar army/containment/infection theme  but didn't really do anything new or original. The attraction started with a hayride to the top of the corn field with a number of fun scares along the way. Once off the trailer and walking through the 7 foot high corn the impact scares really kicked in and a number of scenes had the team jumping in fright.

Obviously corn field attractions are less impactful than claustrophobic indoor mazes but we liked the fact that the event kept the theming consistent and managed to make us jump several times.
So – what of the event as a whole? If you had told us a few years ago that a small farm in Staffordshire would have several theme park quality attractions, we wouldn't have believed you. Certainly Nocturnal and Soul Seekers feel like they belong to a different park altogether and for that the creatives and the management team at the National Forest Adventure park should be very proud. 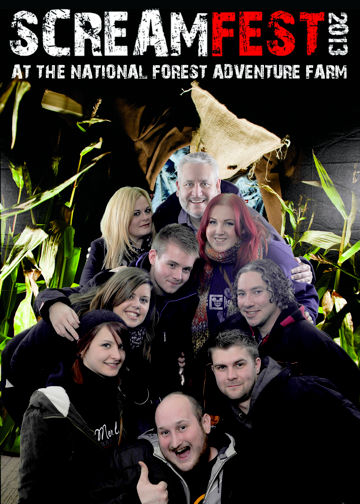 Our review of 2012 including the debut of Slasher - click here

For booking and more information - visit the official website here

Very scary - Fantastic evening. Nocturnal was terrifying with the actors really getting into character. Soul Seekers i have to admit was my favorite was drawn back to it three times. The screamfest at Burton on Trent is really worth a visit. Four scare attractions for £15 is real value for money for a great night out - Karen

Very scary
It was a really good night out, scared me so much but will definatly go again! The guy with the chainsaw was great! Scared me the most lol 11 pound each for a night out! What a bargain
Highly recommended

Very scary
Fantastic quality attraction, four attractions in one, I was there almost two hours and went straight from one attraction to the next so you got a lot for your money. Very well done, I came home and still kept expecting zombies to jump out at me! Soul Seekers is my favourite, if I had a free evening I'd go back and see it all over again. Fabulous stuff! - Abi

I've never been before so I decided me and my boyfriend should come check it out.

We got there early at half 6. We walked straight in no que. thought this is great (boyfriend hates waiting) We decided to go straight to the field of screams first. We qued for an hour as we had to wait for the preparation and the set up. No complaints from me, the anticipation was getting me all ready for it and it was great just talking to the security guards and having a laugh. I wouldn't leave my boyfriends side when we got in there. It was scary, lots of scary face painted people jumping out on you. Best part was seeing the "fake" scarecrows that turned out to be real people. Very good costumes!

Slasher was next, we had to que but it didn't take that long to go in so again great! There was people walking around in costumes keeping us company. Slasher was so good the interaction between the actors was also fun. I couldn't move at one point I was so scared, but it was fun at the same time.

We had a quick break at this point and got a hot drink from one of their stores! Cheap prices compared to some resorts you go to! Next was N =Noctournal. I would love to move past this one and save myself the embarssement. Lets just say I was crying when I was in there. Not good crying either. I was petrified when I went in there! I was crying my eyes out screaming I wanted to leave. I come out and had to sit on the bench where my boyfriend comforted me! After 10 mins of recovery there was one left to do.

Soul seekers was the last, this was a good one! The way they painted the house was amazing and the costumes were also cool!

After a scary night I am now ready to have the nightmares!!

Amazing night ! Would go again, staff had made such an effort ! Had a really great girls night ! And screamed so much , the lady with the lamb was truly petrifying me all night ! Was a wonderful actor ! And the N room !! For over 18's - I'm still in shock about ! So real. Would go next year without a doubt x

each all had something unique about them and they were all scary in different ways, but the two new mazes Nocturnal & Soul Seekers really knew how to make you experience sheer terror. my favourite was soul seekers probably the most terrifying maze I've ever experienced. and in my view definitely one of the top 5 attractions to visit. all in all extremely good value for money high quality mazes and definitely an incredible attraction recommended for scare enthusiasts alike