When we last reviewed Scream: One Way Out in 2010 it had recently gone through a few set changes and additions and at the time we commented how intense it could be. One year on and as part of our halloween tour, we decided to pop in and see if this was still the case. 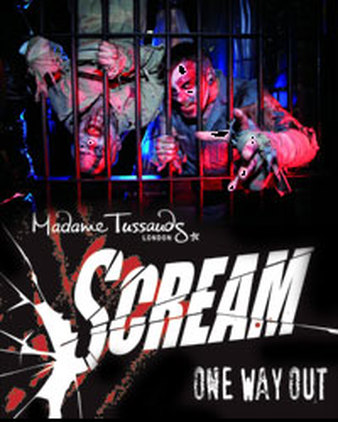 As we have mentioned before, Scream is operated differently to many scare attractions, in that group sizes are much bigger than standard and guests aren't forced into the usual “hands on shoulders” stance. This means the acting talent have to work even harder to get their scares, as the back of the group may have already seen them attack the front of the line and are therefore expecting the attack. Fortunately, the active and lively cast utilise as many cut-throughs and scare-holes as possible to keep everyone guessing, thereby constantly delivering scare after scare.

In fact, for a team working virtually non-stop all day long, the current cast and crew are some of the liveliest we have seen all Halloween. Whether this was extra staffing for the season, or regular staffing levels, we don't know, but they seemed to be everywhere around us wherever we turned. In fact, we had scares from beginning to end and beyond (especially as one of the monsters decided to follow us straight out the final door!)

We love the fact that most of the visitors seem to genuinely have no idea what to expect once inside and this increases the feeling of fear throughout. These aren't hardened thrill-seekers but confused and sometimes terrified tourists, who just want to get out as soon as possible. The whole attraction usually rings with the sound of their screams which of course just encourages the actors to scare even more!

Scream: One Way Out does exactly what it sets out to do, by giving visitors a short, sharp scary shock  For those only interested in the scary stuff, then the current Tussauds entry price makes it prohibitive to 'pop in' just to do it, but if you accept Scream as part of the whole Madame Tussuads experience, then you should definitely do it next time you are in London.

Also visited Scream: One Way Out at Madame Tussauds London - tell us what you thought here

I recently visited Scream at Madame Tussauds and I have to say.... I was a little disappointed. There were only a few actors around, and they weren't that scary. One or two emerged from the darkness to growl at my face and others were hiding behing obvious corners. Its a shame because there were so many different hiding places that would have been better then those the actors chose. Worse, the further I went in the less actors there were. By the end there were none! As well as this the actors were wearing visibility jackets. Why? To be fair I did not go during peak time, but I cant say thats a good excuse!