Now in its 5th year, the annual Scarenation event returns to last year's site, Frogmore Paper Mill. However, unlike last year's long, continuous maze, this year the team behind the attraction have opted for five separate Haunts — Hollywood Horrors; Infested; Afterlife; Freak Show; and The Puppeteer.

After a brief wait outside the tremendously atmospheric building (the world's oldest mechanised paper mill) our party were granted access to the site. From outside we were able to see each of the five entrances (and, more importantly, spot which Haunt attracted the largest group of rowdy teens), then, after a brief chat with a ghoulish, urbane host in a victorian-style suit, we made our first choice — Freak Show.

Coulrophobes need not apply! After a brief introduction from an intimidating lace and leather-clad ringmistress, we were led into the funhouse-style interior of the maze. Numerous grease-paint and mask sporting clowns were on hand to ensure we were never able to relax, regularly peering through windows or popping through curtains when we least expected it, while a brief sojourn through a ball pool was a fantastic addition, as too was a great and startling flourish towards the end. In retrospect, this may have even been our favourite of the mazes and rest assured, whether you're the fearless leader or 'cowering-at-the- back' type, nowhere is safe from the clowns.

From here we popped straight next door to Infested, where a fantastic creepy little host did a superb job of getting us all on edge before we'd even walked through the door (singling out the female in our party for 'special attention') before revealing the creepy backwoods/countryside theme of the attraction and then sending us inside.

Starting in narrow winding corridors filled with weeds and overhanging branches, the constant drone of flies makes the initial stages of the Haunt pretty nerve-wracking… but that's nothing compared to the point at which you are plunged into total darkness and have to navigate your way through a twisty, turning course using a length of hosepipe as your only guide. Needless to say, you aren't alone in the dark and a sudden appearance from a torch-wielding scarer with a mass of spiders on her face caused one of the most memorable jumps of the night. It was a pretty good section of maze, however, a group of girls behind us seemed to reach hysteria pretty quickly and we felt the actors went a little easy on us all from that point.

However, Infested is not just one maze. After a brief pause in a waiting room during which another wonderfully creepy host warned us about the 'freaks' in the following section, we were sent on our way once more. This time there was lighting and if the actors had gone easy on us before, the hooded, insect covered young man who served as both guide and chief-tormentor on this section was certainly not as restrained. He clearly knew his craft and had the leader of our group (ahem) yelping and cowering multiple times. This section also boasted arguably the most striking nightmarish image of the evening, before finishing with another top drawer flourish.

Back into the open air and time for another chat with the devilishly good, grey-suited Victorian host. He suggested a change of pace — maybe we should give Hollywood Horrors a go? Who were we to argue?

Inspired by iconic films that have haunted moviegoers for decades, this maze (which was possibly the most well-lit of the Haunts) boasted a series of recognisable horror movie scenes, all with a little added interactivity. The host for this Haunt was the most chatty (and least in-character) who gave us a brief rundown of the rules (plus a series of risque gags, including a couple which poked gentle fun at my physique!) before sending us on our way.

We wont spoil the films from which this maze drew inspiration, but will say there are some very well-known titles here. There was a small disappointment when it seemed as if a certain character was sadly absent from the scene in which he should appear, but this was more than made up for by the superb bit of misdirection in another section that had all of our group asking as one: 'Where the Hell did SHE come from?'.

What's more, there were a pair of great actresses who managed to freak out EVERYBODY who crossed paths with them. The final scene also deserves praise for the effortless way in which it incorporates the industrial setting to maximum effect.
This was good fun, but slightly less extreme than the other mazes of the evening. It's great for film-buffs and is the Haunt that I'd suggest attendees visit first on a trip to Frightmare.

Three down, two to go, and now we decided to brave the 'most extreme' of the mazes — Afterlife. As we stood there, all more than a little anxious about the 'extremity' of the maze, our bespectacled creepy bug host from Infested once again made an appearance, proceeding to scare the living daylights out of a young girl in the queue ahead of us. Top work!

We were warned in advance that any physical impairments or claustrophobia could make this one unbearable, and were then kitted out in kneepads and work gloves. Needless to say, we were pretty nervous, it didn't help when the leader of the group was fitted with a head-torch and a small hatch was slid open at ground level. It now became obvious -  Afterlife is a Haunt through which you are forced to crawl on your hands and knees.

At first this was pretty terrifying, with actors lurking behind curtains and growling, howling and croaking (as well as seizing hands and other extremities when you least expect it). However, a small flaw was soon exposed. Our group was combined with another to make it a more appropriate size. Alas, the first group (including the torch wearer) shot away into the maze of tunnels, leaving the stragglers of our group far behind. Soon we became hopelessly lost in total darkness. This was definitely creepy, however, we became so confused that we ended up taking one of the tunnels for the scarers and wound up lost behind the scenes! Eventually it became a bit of a slog and a maze that should have taken just 10 minutes took us closer to 25 to successfully navigate! A great idea for a maze, some superb frights (there are holes in the ceiling that the scarers use to full effect) but perhaps some kind of harness or 'hold the ankle of the person in front' rule could be utilised to prevent those like us who accidentally wandered astray?

So, sweaty from the exertions of Afterlife we made our way out into the cool night air once again before heading to our final maze — The Puppeteer. A friendly security guard chatted with us, filled us in on the rules of the Haunt, then sent us into the plastic wrapped domain of The Puppeteer and his creations.

A more typical Haunt, consisting of security fencing to create a 'track' wrapped in sheets of plastic (with plenty hanging down to obscure the way ahead), this haunt used a clever combination of grisly mannequins and actors to keep the attendees on edge. The actors here all took on far more deranged and lively personas than in the other mazes, regularly singing, shrieking and laughing hysterically. What's more a highly efficient scare section involving strobe-lighting and a pigtailed 'dummy' that didn't want to be left behind was genuinely creepy and had us shuffling forward a little faster than we needed to!  In fact, here, more than anywhere, the person at the back had the most to deal with as the Puppeteer's creations seemed to love their new playmates so much they regularly fell in behind the group and continued tormenting us.

The final reveal of the Puppeteer was perhaps a little underwhelming, but the set-up of the last scene was such that it gave us all one last jolt before we burst out into the cold October night air.

Scarenation: Frightmare is a fantastic attraction and our whole group enjoyed it. With refreshments and toilets on site, basic amenities are taken care of and, at a little under two-hours to navigate, you get plenty of 'Boo!' for your buck.  For those of you in the area, this is a fantastic seasonal scare and well worth your time. Check it out! 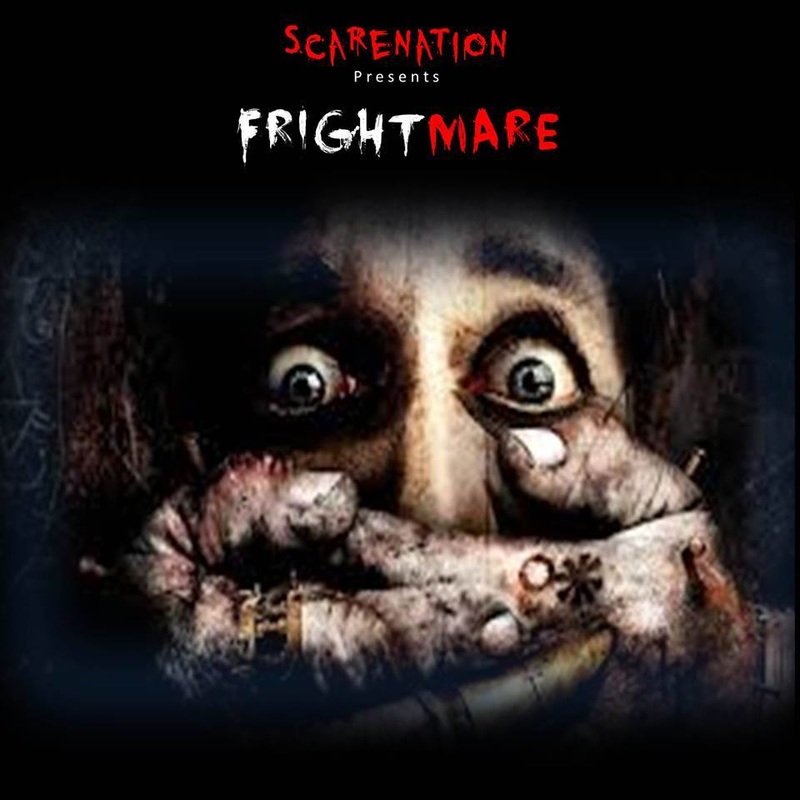