Behind the Screams at Thorpe Park Fright Nights

So we've all been through scare attractions a number of times and we all have opinions on what we think of them, but how many people really know the thinking and logisitics that goes into creating an iconic scare attraction such as The Curse?

On Sunday oct 17th, 20 lucky Scare TOUR members were treated to a behind the scenes tour of one of the park's latest mazes with Laura Sinclair, the entertainments manager in charge of all Fright Nights product.

Excitement was high as we were led down to the drained beach area and introduced to the basics of the attraction.  The Curse was designed with a very specific theme and style in mind and the more you know about the attraction's back story, the more interesting it becomes when you experience it. Yes, many people argue that its just a marquee over a drained swimming pool, but today we learnt about the logistical reason for the current look and how the attraction designers would have liked something a bit more themic.

It's also clear that the Curse is here to stay for a while as a number of potential future additions to the structure were discussed (hush hush!)

Once we went inside it was interesting to see things with the normal lights on and to realise how the attraction was designed for different types of scares.  With the lights on, we got to see secret passages, hidden infra red sensors and realise that some of the metallic looking props and sets are just painted plywood. We also learnt more about the story and the flow of the attraction which shows that it's is not just a run of random scenes but that at each point guests are invited deeper into the story and the ship.

Thorpe Park asked us to keep many of the triggers and effects a sceret and as such - no photography was allowed inside the maze. Which is a shame as it's not until you walk through slowly that you realise just how well themed it is.

After emerging back out into the light and now knowing every trick in the book, we decided a few hours later to go back into the attraction. None of us were expecting to be scared so how naive were we? By the first black corridor we were all screaming with fear and this just goes to show that the set design and effects are only half of the story. Having seen how "beautiful" The Curse looks inside, it could be let down by lack lustre actors if they existed. Fortunately for us the current acting team are on top form (see opening night review) and scared us more than any of us expected. 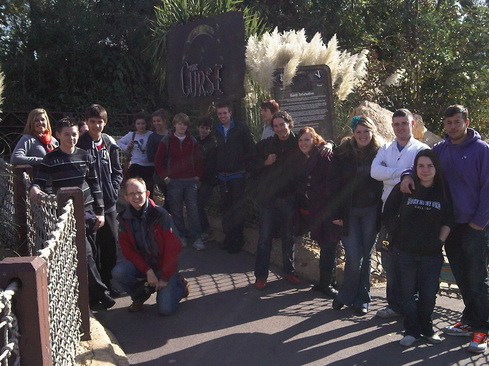 Eager delegates waiting to discover the secrets of The Curse. 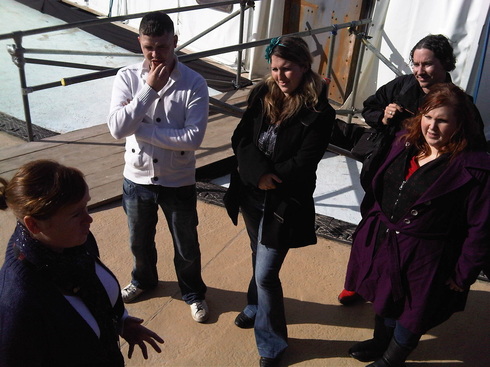 Delegates listen intently as Laura Sinclair talks about The Curse
The talk from Laura and the behind the scenes information was fascinating and it was nice to understand what really goes on behind the scenes in creating an attraction as complex as The Curse.  Of course, with all the exciting plans for 2011, we are already working with Thorpe Park to come  up with an even more exciting ScareTOUR for the 10th anniversary Fright Night! Join us on facebook for the breaking news!

Finally, for those who keep requesting it;

The Legend of The Curse

The Curse tells the chilling story of a cursed ship that has recently washed up on Amity beach. Years ago a fishing vessel went to sea and the Captains daughter who was in love with a lowly crewman, secretly stowed away. Through a cruel twist of fate the pair of them got washed over board and an evil curse fell upon the ship.

Now 50 years later, the Spirit of Amity has mysteriously sailed back to Amity beach and a crack team of forensic experts are investigating the remains of the ship to find out what happened to everyone on board!