The FULL Exclusive preview of The legend of Room 83!

ScareCON is Europe's only convention for the scare attractions industry and hosts seminars and workshops, a tradeshow and the annual ScareBall. In 2011, we debuted the UK's first ever ALL night Scare Rooms which were a screaming success for all concerned. In 2012 - we decided to ramp the scares up a bit more. As such Andrew Georgiades from the BBC came along to see what all the fuss was about....

I don't get scared easily but the Scare Room at Scarecon 2012 was probably the scariest and funniest experience I have ever had!

The tension started even before we got to the room. I took three friends to the Scarecon 2012 Scare Ball to enjoy a nice meal before we embarked on our 12am to 7am horror experience. We sat down ready to eat and watched as other guests started arriving... ALL of them dressed in horror costumes and make up. We were seriously under dressed. In fact everyone was looking at us like we were the freaks! This was awesome. Then it dawned on me. The people staying in the Scare Rooms that night weren't just ordinary members of the public... They were people who work in the scare industry who's job it is to scare people for a living! This meant the actors who were going to scare them that night had to pull out all the stops!
This was going to be on a whole other level!

After watching the evenings comparatively "light" entertainment of razor blade swallowing and fire breathing we went to our room. We knew from our experience at the Alton Towers Scare Room that nothing would happen for the first hour or so to build up the tension and expectation. As it was the rooms didn't start until about the time the Alton Towers one finished!

One of my friends commented that the corridor leading to the room was unthemed unlike Alton towers which looked like a recently uncovered wing of the hotel from the 1920s. I explained that Alton own their hotel, while this was a normal hotel hosting Scarecon and the Scare Rooms for one night only. But if you consider the Scare Ball as a starter, we were already experiencing high tension expecting the main course.

One other comparison was that there was no story. Alton had a narrative of intertwined characters with 5 actors which lead to a conclusion. However the main character "Timothy" who bears a striking resemblance to Michael Bolton, organiser of Scarecon, had been taunting residents via email for months in the lead up to the event. Of course I taunted back which gave a great immersive interactive experience before even reaching the venue.
But as they say actions speak louder than words and these Scare Rooms needed no story. 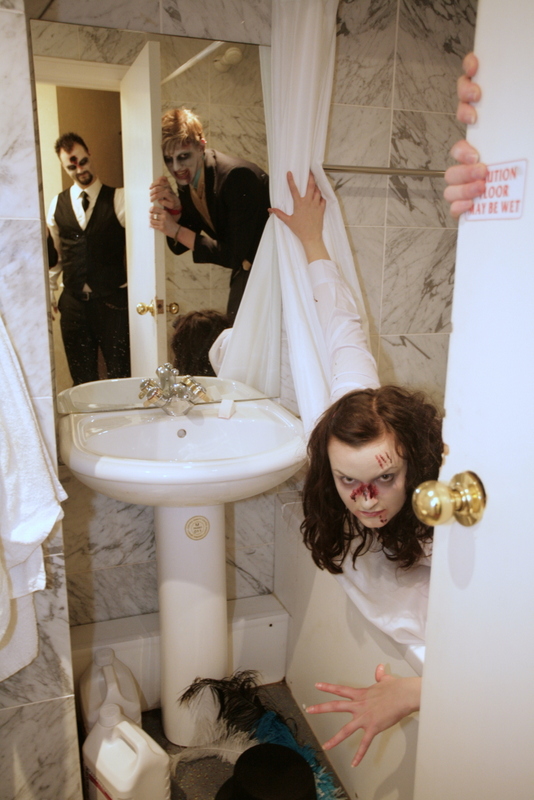 Some of the ScareRoom ghouls await their guests. Photo: Stephen Candy Photography
We were asked to sign a waver and given a special do no disturb sign to put on the door in the event we couldn't take any more and quit.... Wasn't going to happen....or was it? It was just before 2am when the door started to knock. There was no way we were going to open it. It didn't stop them from coming in. Four of them at  the same time straight for me. Then they left... With our bed sheets! It couldn't get worse than that right?....WRONG!

At one point about 16 actors ran in to the room. You had people on the beds, in the beds, under the beds, in the bath room. It was utter horror chaos but there were some very cleverly choreographed moments too. Such as a gimp in a full body morph outfit walking out the room, we saw him leave, but then a moment later, he walked out of the bathroom and out the room again?

One classic moment was when we got our mate Steve to check the room after all the actors left. He checked under the bed, nothing. He was going to check the bathroom but he knew no one was in there, then he went for the wardrobe. He was about to open it when a masked maniac burst out. You can imagine his reaction!  Another great moment was when he finally got the courage to go to the bathroom to pee. He went in and locked the door. There was no one in there. Moments later a masked man walked into the room. We looked at him and said "shhhh he's in the bathroom". He gave us a thumbs up and waited outside the bathroom door. We carried on talking as if nothing was wrong. The moment he opened the door was priceless!

From 2am until about 5am was a non stop thrill ride with a continuous bombardment of scares which gave us no respite or a chance to even make a coffee. At one point a monster even walked in as the other actors were scaring us and casually asked if anybody wanted a coffee and made himself a cup. He then opened the bathroom door and leather face was sitting on the toilet gesturing for him to close the door. Very funny horror relief moments between the scares. One camp zombie even tried to seduce my friends which lead to clever double entendres and him getting taped to the bed.

This lead to the moment when all the actors left with the last one saying "special delivery...don't open the box". What box? We looked around and found a pizza box in the bath with "Do not open!" written on it.
So what did we do? Yeah that's right. We opened it. We wish we didn't. Inside the box was a ... Well I don't want to spoil the surprise but it was shocking and covered in maggots. Real live maggots. The actors then came back with a box of maggots and tried to put them on us. This was the point most people would have given up but we persevered.

The last couple of hours was much tamer with only 3 actors left on duty until 7am. Apparently 6 of the 10 rooms had given up by 5am so that made us feel good that we stuck with it.The only criticism was that there was no ending as such, no grand finale. The clock reached 7am and we said thank you to the actors and we took a look at the state of the room. It was trashed!

It was an absolutely awesome night. One of the best experiences I have ever done. The only thing that would have made it even better would have been to end it with a chainsaw attack. I would have been the first one to jump out of the window!

Maybe next year, which I will definitely be going to. MICHAEL BOLTON RESERVE MY PLACE! 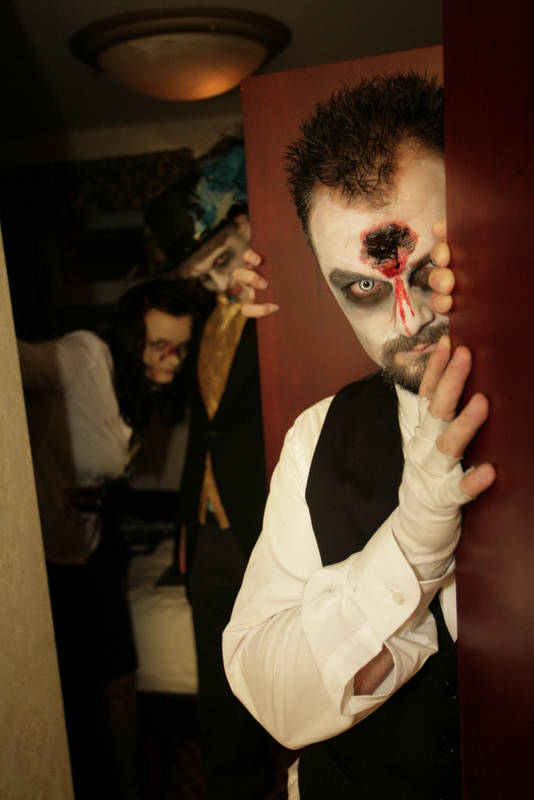 For more details of ScareCON, check out our website - www.scarecon.co.uk

Have you visited The ScareCON ScareRooms? Why not leave us a review. Click here for more details.