Scare Kingdom Scream Park is unique in that it is the only scare event that promises all new mazes each year and despite following pretty much the same route around the venue, it lives up that hype and is back in 2013... 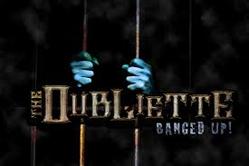 Immediately after leaving the batching area, we were thrust into the first attraction and this sudden assault should be a fantastic way to start. Unfortunately without giving too much away - the "cage" was just too small for the whole group and so the actors were still shouting at people to move down once the show had started. The main vocal in this room was from LuciFEAR welcoming us to his event and stating the rules, Unfortunately, with the actors moving people around and scaring us while the talk was going on - it was impossible to hear what was being said over the screams. This was a shame as it was a really good idea but failed due to the execution. 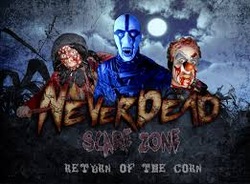 Something mentioned in previous Scare Kingdom reviews is the interminable long walks between attractions in the mud. The walks seem smaller this year but the mud is back with abundance. Trying to walk in the "hands on shoulders" formation whilst wading through inches of uneven mud and puddles is impractical and actually quite distracting. A few times we were paying more attention to the path than the actors alongside us. Fortunately there were several jump scares in the dark but the corn field didn't seem to have any story or connecting theme (but at least we got to see LuciFEAR this year!) 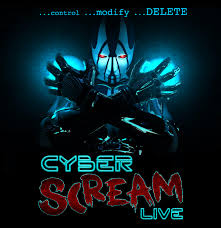 We didnt quite understand the significance of the strange object that had landed in the fiield and after the hillbilly style of the cornfield we felt the next maze was slightly out of place. Saying that - Cyber Scream Live was a fun attraction with some impressive cyborg type creatures throughout. The indoor maze was a bit rough round the edges (the lightness of the maze highlighting the painted plasterboard etc) but it had a great twisting layout and the freaky characters were working hard to scare us. As a completely different experience to the Corn, Cyber Scream felt more intimate as the actors were able to get up evey close and personal and had a number of good cuthroughs and hiding places to attack from. All in - a fun maze but  nothing particualrly outstanding. 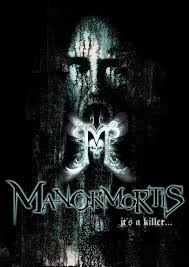 Wow. Now we're talking! After the last two mazes - Manormortis hits you like a blast of fresh air. Built in a brand new facility, this is easily the most elaborately designed scare maze in the UK. Every room looks stunning and the sheer attention to detail wherever you look is unbelieveable. As you travel through the house, each room is instantly recognisable and most of the time you are so busy taking in the detail that you don't notice the lurching actors until they are on you. This house was full of impressive scares throughout (although this reviewer was leading so missed some of the effects that the rest of the group saw) and we loved the "ghost host" who just seeemd to be everywhere.  Room after room, this attraction seemed to go on forever and the level of detail and scares never let up with the enthusiastic actors literally bouncing off the walls scaring us. This maze truly is a must see maze this Halloween 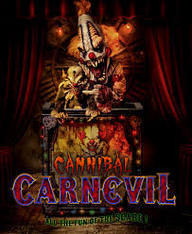 How do you top an attraction like Manormortis? Unfortunately you can't, and the Cannibal Carnevil is a huge disappointment after the beauty of the previous maze. The opening outside scenes are fun and the characters are particularly engaging. The more theatrical style of presentation worked well for the barker and the snake lady and it was obvious they were setting us up for the scares due to come within. A very funny section with the bearded lady has to be commended as being just on the right side of filthy and then unfortunately we walked straight into an animal barn full of Heras fencing. Now, granted it's a popular and cheap device for maze walls, but having just left the beautiful Manormortis, the appearance of these fences and two clowns doing silly things was a big disappointment. The clowns taunted us for a while in the strobes but the maze didn't really do anything and despite a locked cage finale where we were expecting something big to happen, they just snarled in our faces a few times, and that was it. We were then out of the maze and out of the event, which would be disappointing for anyone not planning to do the pay extra Pyschomanteum attraction. It's almost as if the new maze is the big finale but it's only available to those who are brave enough... 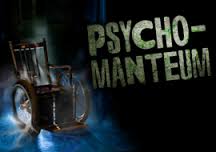 So, the attraction that has caused so much controversy is just an extra £3.50 charge once you have comeleted the main event. But is it worth the extra charge for just a 3 minute attraction? A lot of that depends on your reaction to extreme situations. Given a safety word, guests are sent on their own into a clinic to experience some extreme aversion therapy. Like all visitors, we have agreed to keep the contents safe but its not given much away to say the show contains scenes of sexual degradation,verbal and mental abuse and some really disgusting ideas. Funnily enough - its not scary, its just disgusting (even for this very open minded reviewer). Opinions in our group were split as to whether the show was fun or whether it was just one step too far. Despite the content and the degrading situations, the maze is themed beautifully and the actors were extremely memorable and lively (if not too lively - the shouting in the ear from the male protagonist in the maze was physically unconfortable and left our ears ringing for a while afterwards!)

Having endured Project Fear by GNG Entertainment a few years before, Pyschomanteum has avoided some of the physical elements such as rough housing and water boarding but has definitely focused on the sexual element. Despite their claims that this is not a rape scenario we do wonder what some younger guests will make of it. The fact they are promising to go more extreme next year will excite some people but we just found it dirty and degrading. In most scare attractions, we get scared and then have a laugh about it. Even looking back now we found nothing "entertaining" about this experience. But of course that's just our opinion - the demand for the attraction seemed high when we were there but is it really what the general public want? In a way, it's a shame that Pyschomanteum has received so much press and attention. It is like the badly behaved child in a family - it's the one that gets all the attention which leaves the others in the shade. Instead of bemoaning the optional extra maze, everyone should actually be celebrating how good Manormortis instead!
Taking all 6 attractions as a whole, Scare Kingdom is a very entertaining night out with scares of all levels across the whole event. Of course, the theming and detail in Manormortis and Pyschomanteum are extremely impressive and do make the other attractions look a bit lacking in comparison. It will be interesting to see if, over the next few years all the attractions come up to their standards.

Very scary
I myself am a very jumpy person and i thought the corn field (neverdead zone) was quite good although only one character actually came to the group and then the clown near that zone , i think the scare level should have been rose abit more. I think overall it was a great experience and i would love to go again next year , i think the pricing is quite alot for how long the experience is but it was so worth my time going!

Scream Kingdom was good but I agreed with the review it was only really the metamorphis (i think that's what its called) and Psychomanteum that are the big draws and had the most attention whereas the other attractions were really poor, I think if you'd paid the £16 entry you would be disappointed as its only really Metamorphis that's worth the fees.
Personally I think Psychomanteum was the best due to the shock factor and its the only one I've actually felt scared in, more the anticipation then the actual attraction.

Manormortis is probably the most scenic I have been in, with good scares to match, however I thought it could have been a little darker in there.
Psychomanteum was an experience that I still can't make my mind up on, it wasn't particularly scary but was quite shocking, on the whole it could have benefited I think from being a little longer as the sense of menace was just starting to build as it ended.
The other mazes felt a little flat and rushed, I don't know whether this was because it was the last night of the season or not, but all credit to the snake woman as she was very entertaining.
Overall very good value for money as Manormortis is probably almost worth the entrance fee alone. - Richard

I was expecting a bit more from it from the way it is marketed if i'm perfectly honest.. i didn't hate psychomanteum as much as i thought i would - i felt sick and grossed out from it still though and i wouldnt say i loved it, but i think thats the desired effect isn't it lol.. manormortis was stunning.. i didn't really get any scares though.. but i would happily spend all day looking around in there! everything else seemed quite poor in comparison to those two - theyre the only two that really stuck out.. was quite surprised there's not really much of a park/site atmosphere going on there though once you get past the introduction bit.. i liked the idea at the start of kind of going on a journey from one maze to the next so to speak, but on reflection, i think it works better to have the mingling space in the middle of all the attractions for people to go in mazes as they please etc - Kassie