​After a Covid enforced break in 2020, Psycho Path is back with a bang for Halloween 2021! This year has seen a number of changes including two brand new attractions, and a new event layout that means all attractions are accessible from the central event space (and not in woodlands a mile away, like before.) This immediately gives the event even more of a festival/scream park atmosphere, as the guests are all focused in the main area which is home to several bars, live entertainment and multiple catering outlets. But of course a great atmosphere is one thing - but what about the mazes?

We started with I-Scream, our favourite from 2019, which is the most "scare maze" type attraction at the event. As we stated last time - the simple clowns curtain maze soon descends into something much darker and scarier, and we had so many scares and laughs in here, that we lost count. There seemed to be actors EVERYWHERE, and they were even livelier than in 2019. In fact we must stress that across the whole site - all the actors were far more physical and vocal than previously. It seemed that this year they were given the freedom to speak and touch guests more than before, and across all the mazes we found ourselves screaming in laughter at their antics. Especially in I - Scream - it was clear that the actors were having as much fun as we were!

New for 2021 is Cornered, an elaborate corn maze overseen by two giant pumpkin headed scarecrows. Clearly we have had a great summer for corn farming, as the maze easily stood 7 foot high and on a windy night the rustles and movement in the moonlight was just as scary as some of the actors inside. This maze seemed to go on forever and utilised many different structures to provide more scares along the way. Once again the actors were fast and scary but also had a cheeky playfulness to their characters, which we loved.

The other new attraction for 2021 is Isolation, a strictly "alone" experience for only the bravest of guests. Faced with 4 doors - guests are randomly allocated an entrance to the attraction, and then left to find their way out once the door closed. We really don't want to spoil what's inside Isolation, but we went through two different doors and the two experiences were as different as they could be. One was light, and strobey,  the other was dark and claustrophobic. Whatever the basic theme - both had really impressive close contact scares and effects, so we decided that our nerves couldn't face the other 2 rooms!

Finally - the fourth attraction is the relocation of Psycho City from the forest. Unfortunately this wasn't open on press night but look out for a full review coming soon.

All in - we have to commend Psycho Path for all the changes made to the event since the last time it ran. The elimination of the van transport to another site really works better, and the addition of the two new attractions help makes the event a great night out. Along with the entertainment in the main arena, and the lively and impressive actors - Psycho Path really have a great Halloween event on their hands. We will definitely be back! 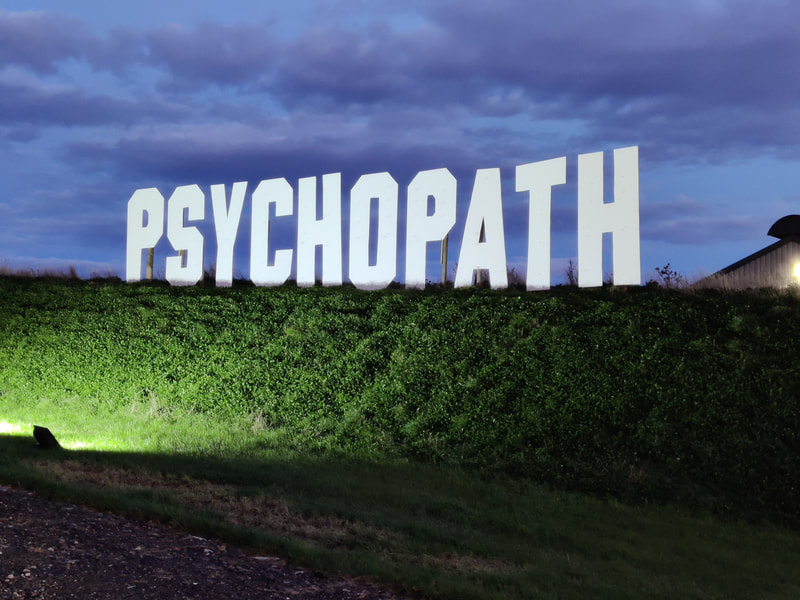 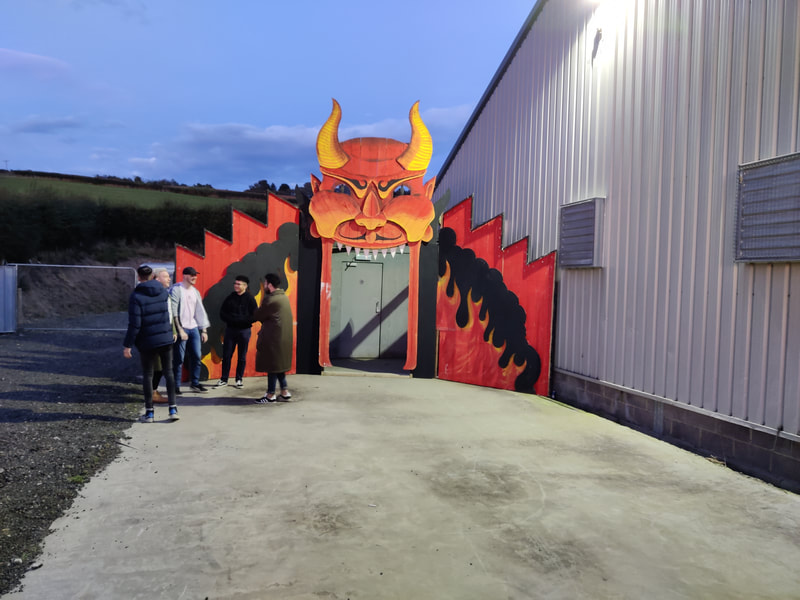 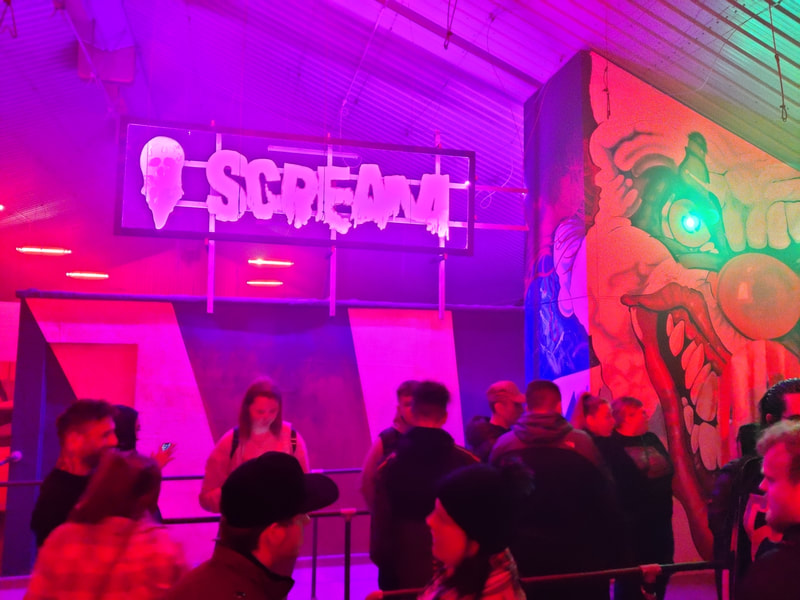 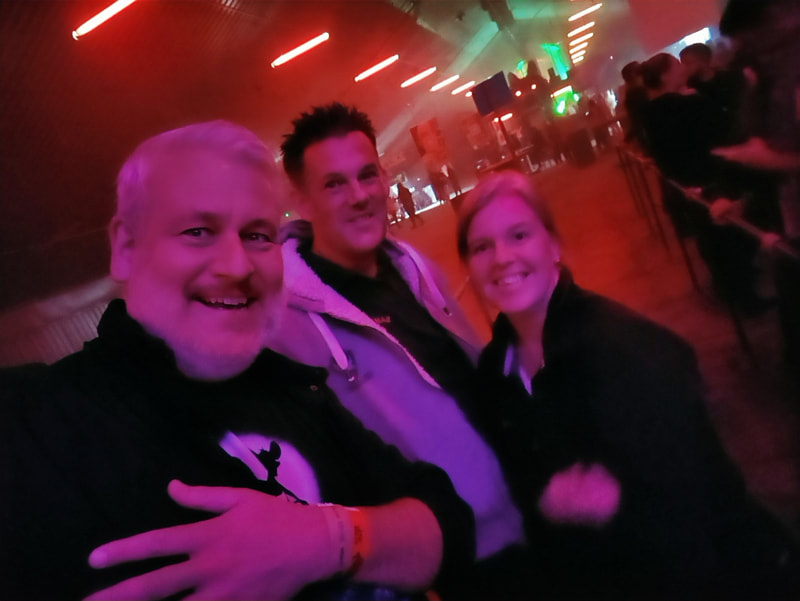 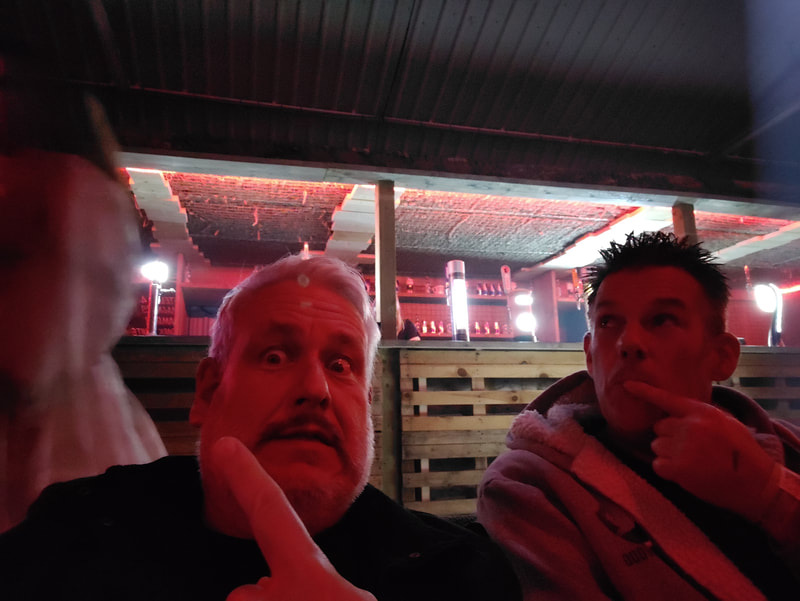 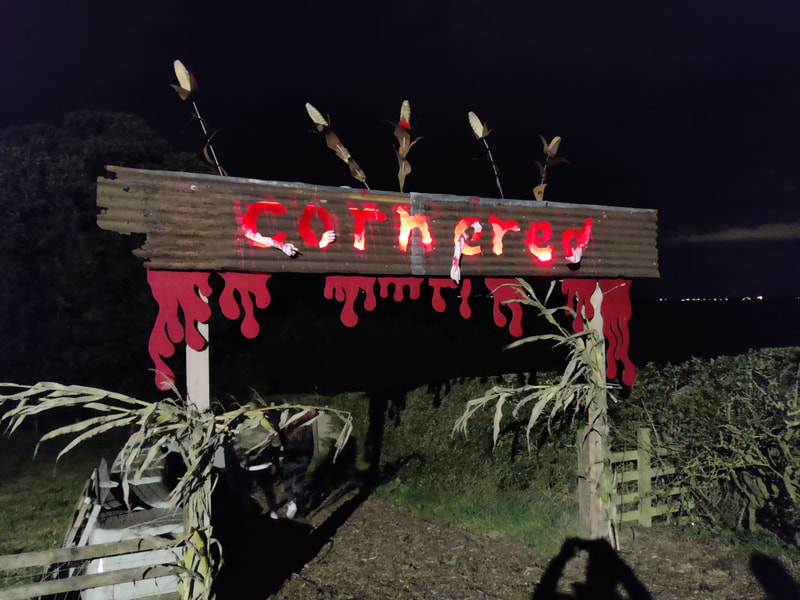 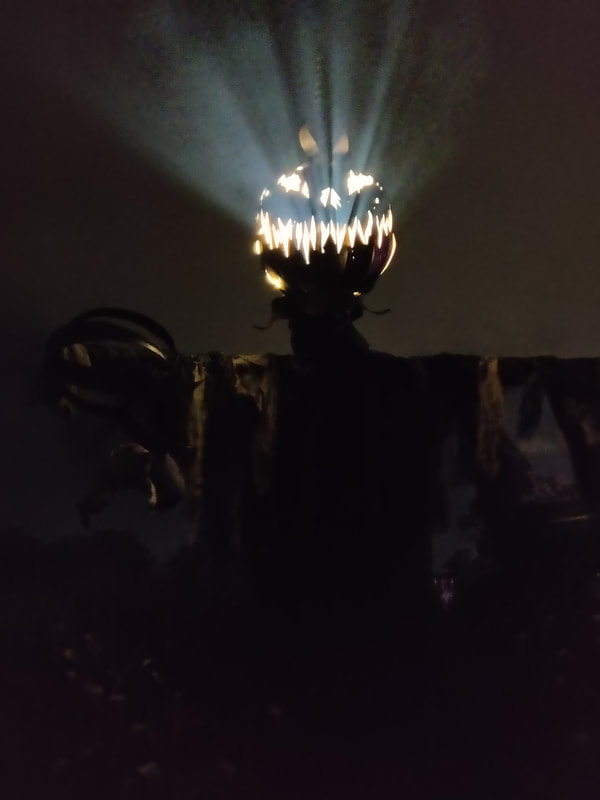 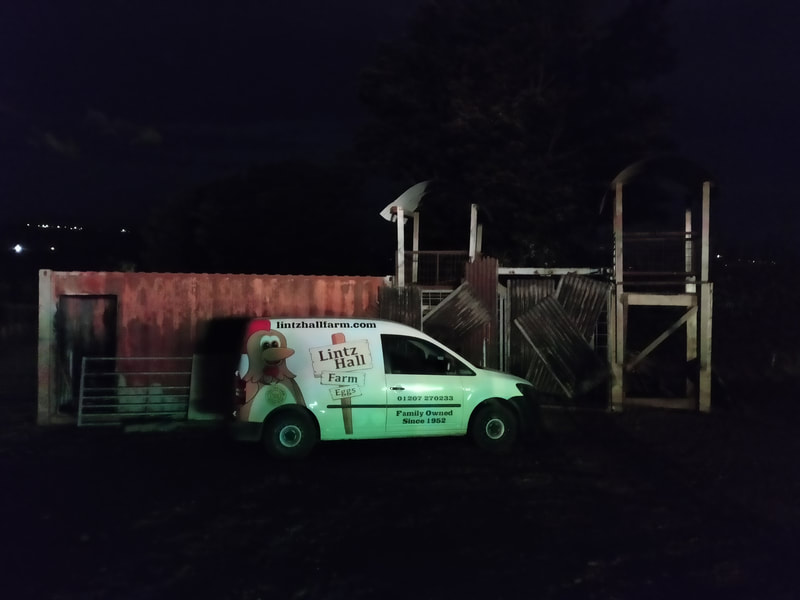 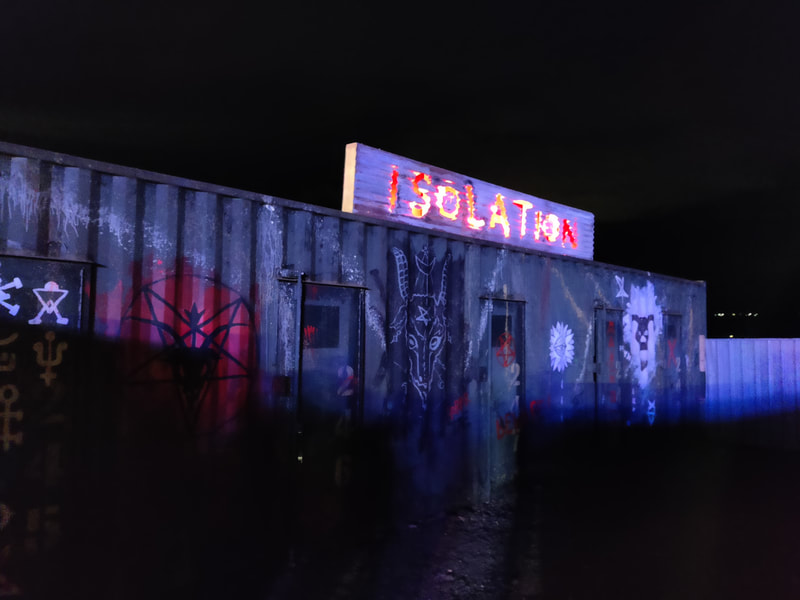 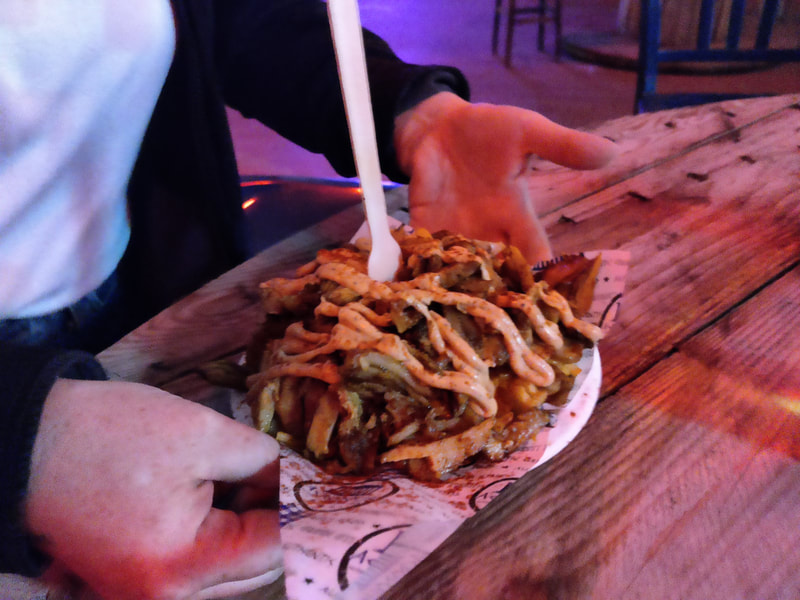 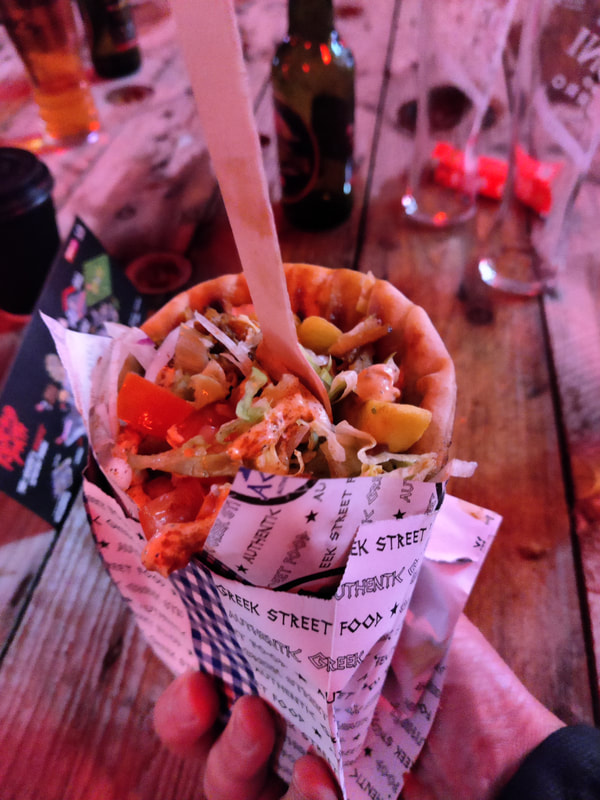 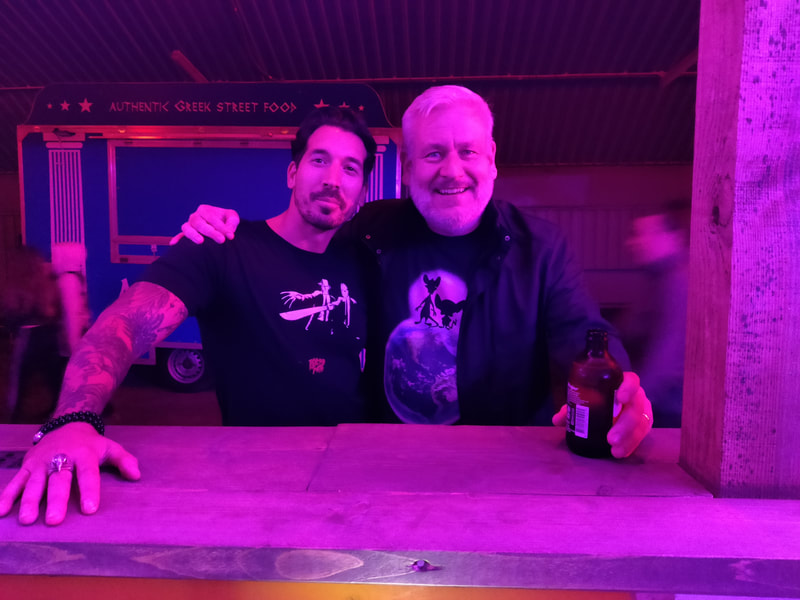 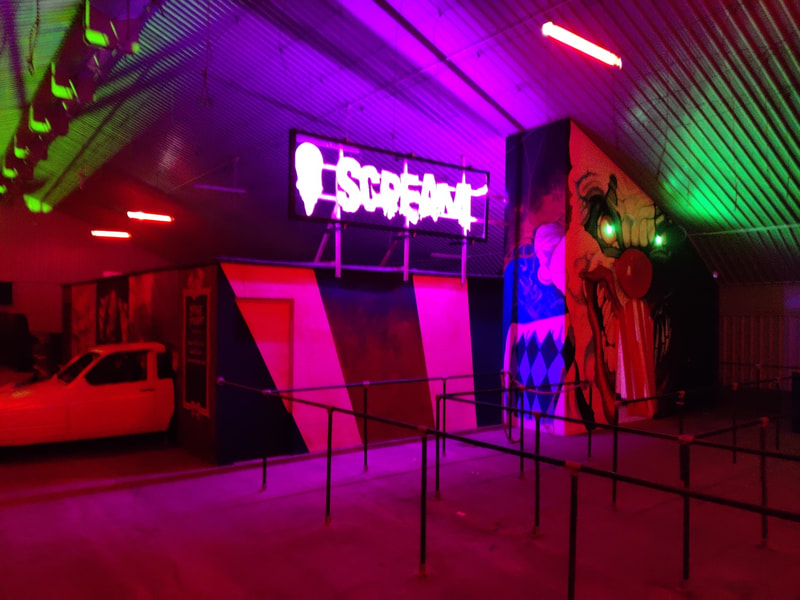 Psycho Path opened in 2018 to generally mixed reviews. Some liked the raw energy of the event, but many felt that it was a mismatched set of scenes on a woodland trail. It was an OK start for a new event, but seemed to be lacking certain something. Fast forward just one year and the team have transformed the event into a full on scream park with multiple attractions, rides, shows and plenty of concessions.

Upon arrival at the main entrance, there is nothing that really gives away what is about to happen. Apart from a busy car park, and a few people milling around, there is just a simple door in the side of a massive old chicken barn. But what was beyond that simple door blew us away!

It was like stepping into a whole new world as we were immediately assaulted with loud music, flashing lights and a crazy festival atmosphere that never let up all night. At one end of the arena was a stage that hosted different acts, including a magician, rock bands and an aerial artist, while around the side were different specialist food suppliers and two large bar areas. It says a lot that we actually stayed in this area for two hours before even heading into any of the mazes. During this time we had our first ever Parmo (a Geordie speciality!) as well as sampling the custom beers (ie Psycho Lager) and testing out their custom created gin. Of course - no matter how good the atmosphere and roaming characters were here, we needed to try out the scare experiences

The main show is the Psycho Path itself, which is actually located about a mile and a half from the main arena. The queue leads to a shuttle service where groups of 20 are bundled into the back of a darkened van, before being bounced and jostled to the front of the trail. It's a fun start and we really needed to hold onto the dangling ropes along the way. At our destination, we could just see some distant lighting and fire spreading out into the woods. Our only way out was through and so we headed off into the unknown.

Along the way we experienced multiple scenes and characters as we walked into and through different structures and buildings. The scares came thick and fast from all directions but with such a long route there were some parts of the trail that felt a little underpopulated. Also we aren’t really sure what the story was actually about – or if there even was one. Beside that little detail we still had fun, and woods around us rang with the screams of others!

The trail then led to the second attraction of the night – Pyscho City. The theme for this maze was a post apocalyptic city ravaged by war and disease and the route took us around many deserted buildings populated by creatures. This maze was very reminiscent of The Colony at Tulleys, with lots of large wooden structures and huts but (thankfully after the previous long walk) less of the empty spaces of Colony. All in, this was a tight attraction, with some good scares along the way which made it a perfect ending to the outdoor trail section of the event.

Following a stiff drink in the Psycho City bar, we hopped back into the vans and headed up to the main arena again.
The final scare of the evening was the clown themed I – Scream. The maze started like a traditional curtains maze but soon progressed into more detailed sets and effects. The actors in here were probably the most aggressive of all the attractions and we had a number of really good scares in this maze. It was a great end to our night.

It is clear that the team have put a lot of effort into growing this event, and for just a second year, the expanse of the whole thing is staggering. As they progress in the future, we would love to see more attractions reachable from the main arena as opposed to accessible by van, which would make it feel whole as an event instead of two disparate parts. But that niggle aside we had a great time and had to literally be dragged away when the venue closed at midnight!