Ok, we are officially addicted - we just cant keep away from Pop Horror! So while other people were out with their partners for a romantic night, we popped along to the Royal Vauxhall Tavern for another evening of raucous fun - Pop Horror style!

As usual, the night was a variety line up with drag queens, comedy acts and more, all held together by the irrepressibly loud Baby Lame - who looked stunning in his pink baby doll nightie!

As can be expected in any variety line up, there can be a few misses, and we genuinely felt the spoken word performance by Chiyo failed to engage the audience, Fortunately all the other acts were able to claim the mood back quickly.

By the end of the night we had sung along to power ballad karaoke, participated in some speed hating and entered the damaged goods tombola, before dancing the night away to some lively tunes. All in - another fantastic night from the Pop Horror boys. They will be back in April with "It's Britney, Witch!"

Pop Horror is clearly a guilty secret of ours. Ok it isn’t a scare attraction in any way, but as fans of horror we just love the camp silliness of it all. Where else could you find international drag queen Tracy La Bouce Barlow dressed like Freddy Kruger miming along to Madonna as Vogue in a mock up of a bad 70s hotel?

Although Adam All and Apple Derrieres did a great job of hosting they didn’t have the raw entertainment and shock value of regular host Baby Lame, and as such weren’t able to whip the audience up into a frenzy. Also the misjudged comedy routine of the usually excellent Emily Feist, meant the evening started off slowly but picked up quickly afterwards especially with a stunning energetic routine from Lasanna Shabazz

With a drop-in performance from Baby Lame at the end of the night and puppy troubling cameo from Mynxie Monroe, the evening ended up on high with the packed audience dancing the night away.

If you are ever in London and want a bit of camp entertainment – we would highly recommend you check out the crazy guys at Pop Horror. They will be back next year for their Valentine special.

​Slice up Your Life by Pop Horror

So, after surviving Bjorn of the Dead by at The Royal Vauxhall Tavern in London (see review below), we knew we had to check out Pop Horror's latest event - Slice Up your Life. We weren't disappointed!

Following a similar theme to the previous event, Slice Up Your Life was a camp and silly night that entertained us from beginning to end. Once again hosted by the the filthy Baby Lame, the evening consisted of sketches, songs, games and a lot of crazy fun themed around Girl Groups.

Quite naturally, The Spice Girls featured prominently but who knew that a drag queen biting off the private parts of a "Chucky" doll would go so well with No No No by Girls Aloud? Other acts included a hilarious vampire sing along that ended like some bizarre panto as Van Helsing stalked our heroine, a boylesque fire routine to Black Magic by Little Mix and a deranged Ryan Air air-hostess trying to "serve" the passengers whilst the plane is crashing to the ground. "You didn't chose to pay for the optional lifejacket for an extra 35 Euros? Not my problem!" It was hilarious and satirical, as it ridiculed Ryan Air's quite ludicrous business methods.

The scenes were punctuated with some silly games (yes we ended up on stage again!), as well as some hilarious routines by our host - who definitely took a liking to one of our party and fixated on him all night!

Although not a "scary" event in any way, we absolutely love the idea of mixing horror movies with cheesy pop, and you cant help but laugh along with the infectious, bawdy (and sometimes gory) routines during the night. The Pop Horror team will be back at the venue at Halloween - book your place now! 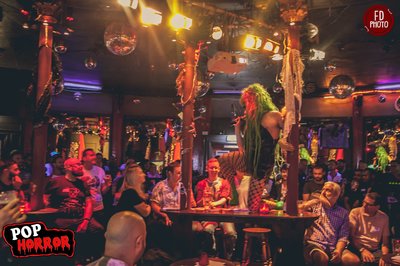 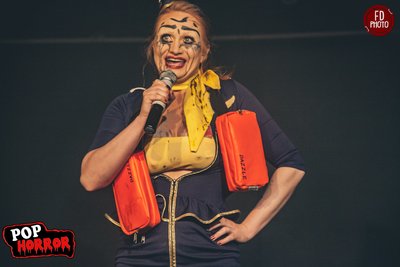 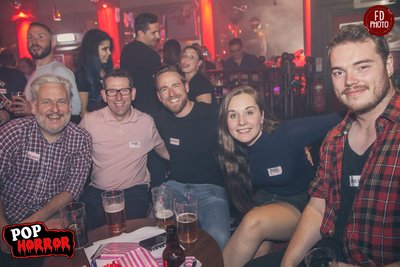 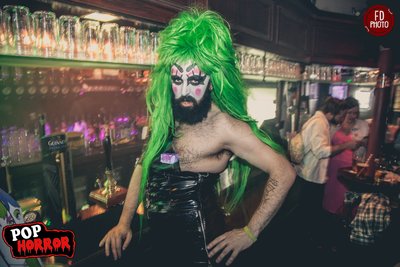 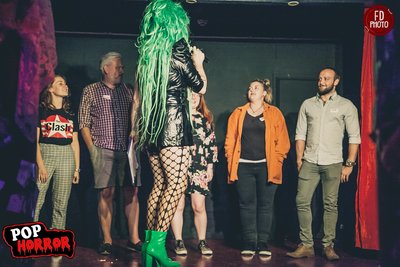 Bjorn of The Dead by Pop Horror
​

Everyone will know by now, that we cover a wide range of events. From scare attractions and scary room escapes through to immersive and live theatre - we celebrate all forms of entertainment. However, even we were surprised when the invite came in for Bjorn of the Dead!

Hosted at the Royal Vauxhall Tavern in London, Bjorn of the Dead is the latest show curated by the twisted minds at Pop Horror. Following the success of I Know What You Did Donna Summer, and The Cher Witch Project, they have turned their attention to Sweden’s greatest export – Abba. As you would expect - it was camp and cheesy in equal measures with Vaudeville acts doing horror inspired pop songs, all mixed up with some audience participation, and hosted by a bearded drag queen.  The acts ranged from Annie Wilkes from Misery singing Lay all Your Love On Me, while holding a blood-covered axe, through to someone in a Saw head trap singing SOS while pulling her eyes out.

The Saw routine was probably the goriest of all the acts, with the rest of the shows generally going for humour more than horror, especially with drag king Adam Arr as a mad professor creating a man in a lab to the tune of Gimme Gimme Gimme (a Man After Midnight).

Between the shows were madcap games including a hilarious round of “Ikea or Swedish town” as we tried to guess the origin of certain words, and a convoluted Instagram photo challenge that we managed to win by default!

Clearly, given the location (RVT is one of London’s oldest and most famous gay bars) and the late night nature of the show, this really isn't for the easily offended, or the boring. The main host – Baby Lame was as potty mouthed as you would expect, but really pulled together all the disparate parts of the show to create a thoroughly entertaining night out.

Kudos has to go to Tim and Paul at Pop Horror who created this incredibly silly show and kept us entertained all night. It’s a testament to them that we originally planned to stay just for the first hour, but then found ourselves dancing away at the late night disco 3 hours later! Although a little, rough around the edges (faulty mics, missed cues etc.) this all just added to the charm, and we thoroughly look forward to their return visit to the venue this summer! 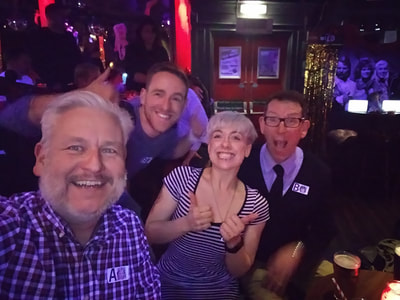 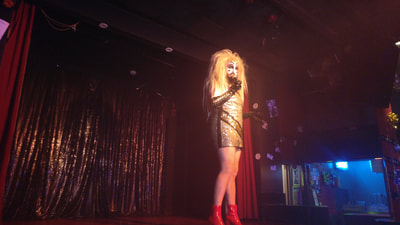 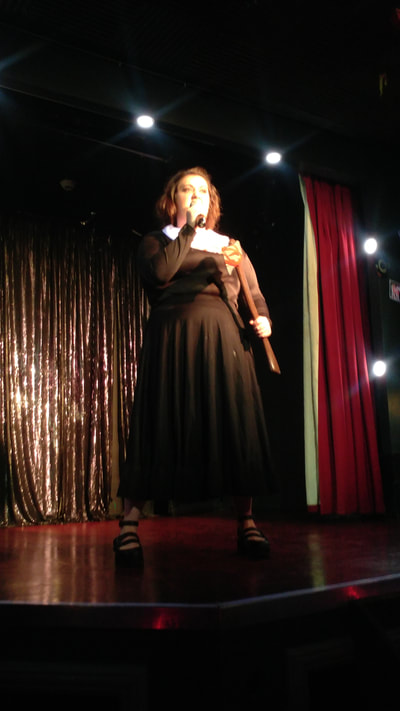 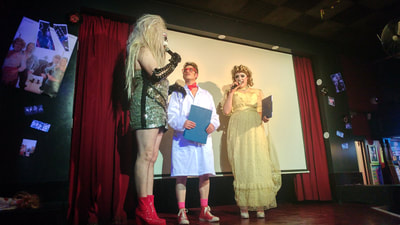 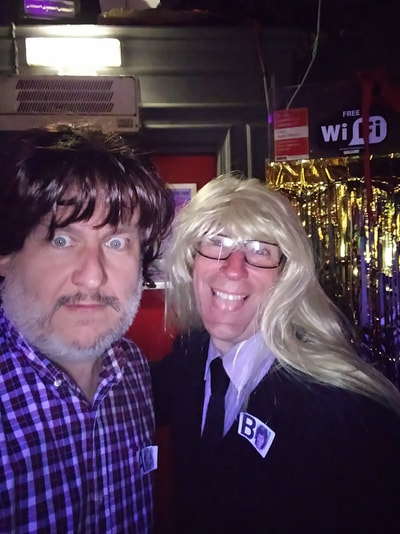 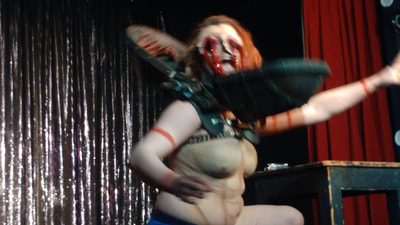 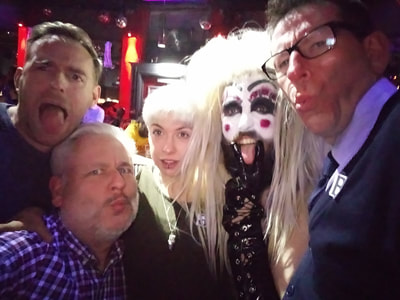 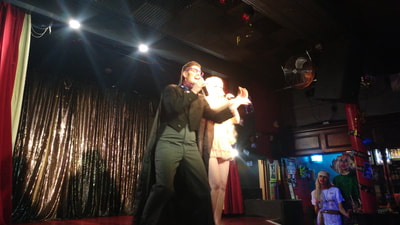 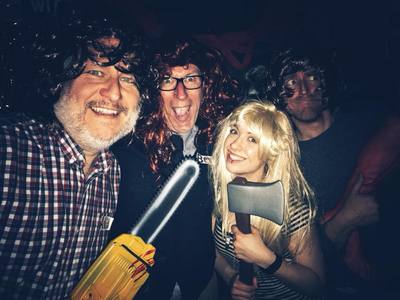