The evening Phobophobia event at The London Bridge Experience utilises both floors of the attraction and is effectively split into two halves. Upstairs is all about pitch darkness, sudden noises and disorientation, while down stairs is the usual London Tombs experience, on steroids, with a very sick evil extra! 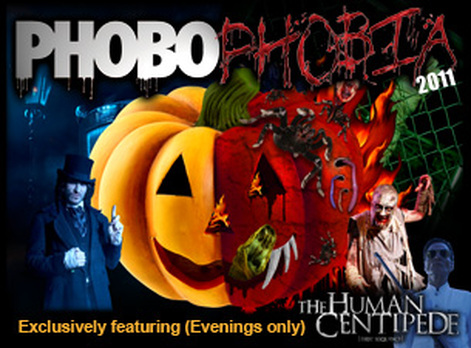 Upon entering the attraction we were greeted by a quite sombre character, Brownlow,  who was in the middle of a seance to contact the dead. The tarot cards laid out before him supposedly indicated death to one or more of us if we continued beyond the book case. Any sensible punter would have left there and then but no – we decided to go in and see for ourselves!

The upstairs path of Phobophobia is taken literally in pitch darkness. Directed to walk towards the red lights,  we stumbled as a group through darkened corridors, just able to make out hulking shapes looming in the dark. Passing each “vault" of the main show area meant we knew that there was space around us for someone to attack at any point and  the fear and tension accumulated the further we got. The darkness was coupled with an amazing multi levelled soundtrack that seemed to spring out at us from everywhere. Whispered voices, screams and sudden animal noises all mixed together  to leave us desperately looking around for any sign of attack while we all clung to each other.

Interestingly, we probably only saw  (or  rather sensed) 1 or 2 actors in this section which was much less than we expected but by the time we got to the final room before the Tombs we were pleased to step out of the dark and be able to see properly again.

Knowing that the attraction would use both upstairs and downstairs, we were expecting the show to just transition between the two sections but we were stopped in the usual batching space, walked down the stairs and had our photo taken. This ruined any tension the upstairs scenes had created, although we didn't have to worry too much. Within seconds of being inside the Tombs our stress levels went shooting through the roof!

The London Tombs has always been the scariest attraction in London and for Halloween the intensity level was been turned up even higher! Actors were appearing from just about every angle  and hardly a moment went by when there wasn't something attacking us. Surprisingly, many of the animatronic effects (including the Hellevator) were turned off,  but seeing as there were so many actors it really didnt make much difference.

Since our last visit there have been some changes to the sets and the new “wooden palette” section  was a massive improvement over the existing chain-link fencing as it created  a very close and claustrophobic pathway that left us feeling trapped and vulnerable.

Obviously, the highly trumpted new section was The Human Centipede and the scene is as shocking and grotesque as you would expect. It's not scary (even though the fake Dr Heiter kept trying to attack us) but the actual shock at seeing three live actors dressed in that formation was both fascintaing and creepy at the same time!

All too soon, we were stumbling into the slaughterhouse room for the big finale and back upstairs to reality!


The London Tombs never fails to scare us when we go through. It is very long and when the actors are on top form it can be absolutely terrifying. For Halloween there would appear to be an ever bigger cast than than normal which just increased the fear exponentially.  We came away shaking and quite hoarse from screaming - it really was one of the scariest things we experienced this Halloween! 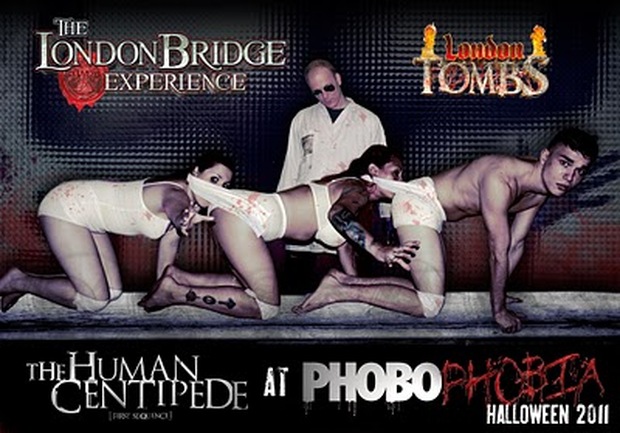 To find out more about the London Bridge experience - visit their website - www.londonbridgeexperience.com

The regular Tombs experience is well worth the money if you get a 241 voucher (you can get them everywhere). The Tombs lasts a decent length and is full of props and sets you wont find anywhere else in the UK.
It's also up the top among the scariest attractions in the UK.

Also visited Phobophobia or the London Bridge Experience? - tell us what you thought here