As hard as we try - sometime's it's just impossible to visit every new scare attraction in the UK, so unfortunately there is no official review of Phobia by Kernow Scare Attractions.

Fortunately our keen ScareTOUR readers have sent us their comments... 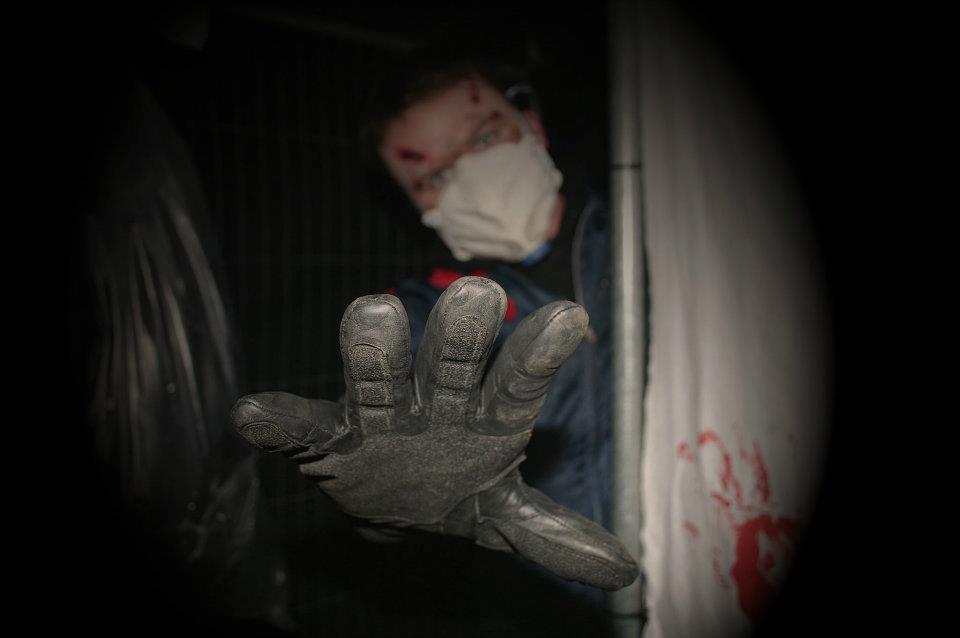 While my friends and I were enjoying ourselves at Nass Fest 2012 we had overheard some people talking about a scare maze and how much they had enjoyed it. I had been to a couple before and loved them, so encouraged my friends to come with me and experience “Phobia”.

I wasn’t expecting a lot from it because the last scare maze I had gone to was during “Fright Night” at Thorpe Park and I was guessing this maze from Kernow Scare Attractions might not have been as grand, as theme parks would most likely have a much higher budget to mess around with!

However, I was totally taken by surprise. We were greeted and given a quick safety talk telling us that we weren’t allowed to touch the actors and that they wouldn’t touch us etc and then we entered the maze accompanied by a symphony of hellish voices screaming “FRESH MEAT” which my group and I knew meant US! The maze itself was dark, at times almost pitch black, and the décor was twisted and ranged from tarp covered wire fences to bloodied sheets with messages from other poor souls such as “turn back now” or “help us”. All of this, coupled with a deafening, eerie and sometimes bloodcurdling soundtrack and overpowering hospital cleaner smell, really attacked our senses and made us feel very vulnerable.

The actors themselves were fantastic! The maze felt claustrophobic and was so dark yet the actors could appear from almost out of thin air and disappear just as quickly as if they had night vision! I don’t get scared easily and I thought knowing that the actors couldn’t touch me would mean I wouldn’t get scared but I was SO wrong! The speed that they would run at you made you believe that they would come crashing into you but then they stop DEAD in their tracks (pardon the pun) to within an inch of your face which, let me tell you, is terrifying no matter how big and strong you think you are. Each actor had a different character, from the escaped killer patient to a twisted and psychotic clown. Their make-up was brilliant and so were their costumes but to be honest I was more concerned with just getting through the maze as quickly as possible without weeing myself, than to stop and check out the monsters that were chasing us.

From the outside the maze didn’t look very big at all but somehow they managed to make it bigger on the inside. (I’m guessing they have a time-share with Doctor Who!) It actually took us nearly five whole agonisingly terrifying minutes to make our way through the maze (walking and crawling) and when we saw the exit we made a run for it, especially as the final scare is quite intense!

I loved this attraction, it scared me half to death but it was easily just as good if not better than the other scare mazes I’ve seen around and I would definitely recommend anyone who sees this attraction around to test their mettle against the horrors contained within “Phobia”.

Have you also visited Phobia? Why not leave us a review? Click here for more details.