Phileas Fogg's World of Adventures is a multi attraction destination, with a mix of family games, as well as adventures for the more thrill seeking crowd. Naturally we were drawn to the Jack the Riper Tour, but how was the rest of the experience?

Jack The Ripper Walk of Terror
​

Nestled discretely in the corner of the main bar, the well themed funeral parlour gives no hints of the horror that lies beyond. Once we had stepped through the doors we were transported the dark and dingy streets of Victorian London. The sets, smells and sounds really created a totally believable atmosphere and we nervously ventured deeper into the attraction for our encounter with Jack.

Using the historical character as a base, has given the team a chance to present the show as a mix of history and horror. For every factual point about Jack or his victims, there were a multiple of scares and jumps that had us screaming with fright. It was also really disconcerting to keep seeing glimpses of Jack without ever actually encountering him. The constant presence made us feel we were always being watched and just added to the scares and unease.

It was clear that the attraction has been designed with scares in mind, as we were virtually bombarded from all angles as characters  appeared and disappeared during our 20 minute experience. This had the effect of making it feel so much bigger than it is, and that it was populated with a massive cast instead of just a few enthusiastic actors giving it their all.

Everything about Jack the Ripper Walk of Terror oozed class, including the incredible sets, some large scale effects and of course the believable actors. There are reports that they are going to make this even scarier for Halloween, which sounds like an impossible task as they certainly scared us throughout! We definitely recommend you check this out 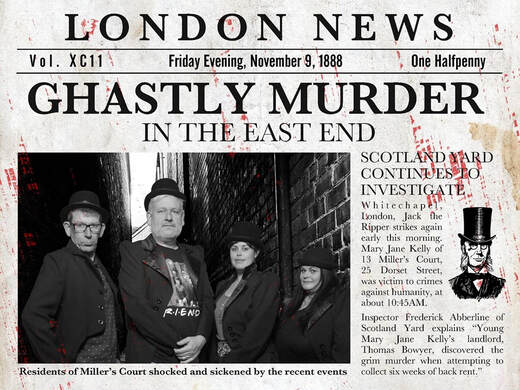 Ever wanted to travel the world solving puzzles and playing a few skill based games, all while never leaving Brighton? Well Phileas Fogg's World of Adventures is the place for you.

We visited as a group of four and were fortunate to be in a group of our own (smaller groups may be combined during busy times.) As we entered the attraction, we were met by our companion on the journey - the titular  Mr Fogg himself, and it was clear from here on that we were about to have a riotous time.

Our guide was genuinely hilarious and had a great line in self deprecating humour, as well as being able to take the mickey out of us all, while staying (just) on the right side of decency. Our Fogg was clearly having, fun and as we retaliated and joked with him as we progressed, the banter came thick and fast. The rooms were fun, and the games were exciting and different, but the true success of our visit lay with the presentation of this little character. Although he often referred to his own height as "I'm not short, I am just standing a long way away", his performance was so large that it made up for what he lacked in stature! Thereby lay the fun in this adventure, we were all able to joke and poke fun at each other, but in such a warm and welcoming way that we couldn't help but enjoy it!

The rooms themselves ranged from Venetian canals, through to jungles and Egyptian tombs, with some of them being slightly ominous and foreboding. One or two were actually scary, with a character in a maze like section, genuinely leaving us all terrified to go into the back passage of this room! And this was the other thing that surprised us - we met multiple actors along the way, and all of them played along and made us do some hilarious but weird things. Highlights were the "smooth golden nuggets" placed into a cupped hand at groin level and having to pretend to be Scottish grandma whilst hiding from the police in the dark!

Like a Crystal Maze on steroids, we bounced around from room to room with various success at certain puzzles, sometimes split up with our own tasks, and sometimes all working together. It was certainly frantic at times, and we always seemed to be racing against the clock to complete each mission. The show itself lasts about an hour and 15 minutes and it's hard to recount how many rooms and puzzles we pushed through in that time. There was no dull spot at any point, and the attraction certainly provided good value for money, with the amount of immersion and activity that you experience.

So, although we didn't escape with all the money we could have (and had a bit of a disastrous gamble at the end) we thoroughly enjoyed every moment of this incredible show. In fact we cant wait to go back and do it again as there were some games we missed, and we reckon the improvised nature of the characters could make the show completely different a second time with a  different (and taller!) Fogg!


After our experience , we settled our nerves in the nicely themed bar. Here we have to point out that all the staff from front of house through to the bar staff, stayed in character impeccably, which created a really friendly but professional atmosphere.

Foggs is open daily but do check the times carefully as they also do children and young family tours and we wouldn't have had half the scares or innuendo if we hadn't booked got the adult show! 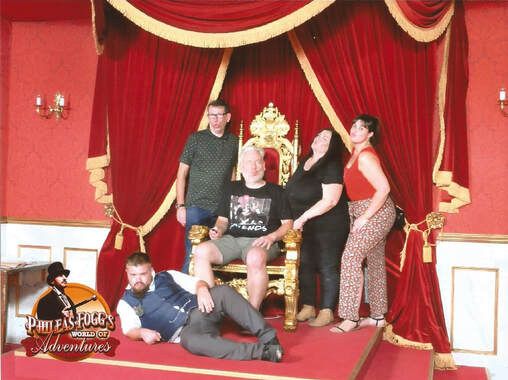 Remember - Fogg isn't short - he is just sitting a long way away!!