Panic Room Gravesend are known for their ingenious live games, and in these troubled times have devised a series of virtual games that can be played as a group. They have 4 in the planning and we recently played their first game CSI Grounded.

Unlike some other games, where you control a host remotely, CSI Grounded, is a self contained puzzle game that has a series of games, puzzles and clues that all players have access to via a bespoke portal. Teams wanting to play multiplayer will also need to set up a group chat or Zoom conference, so all the players can talk to each other. We personally found it easier to Zoom as we could then show each other different things as we tried to solve certain puzzles along the way.

Like a live game - there are lots of things to look at, and we did find navigating around the screens to be a little bit clunky at times. Videos open in different web browser windows, so another helpful hint would be to close stuff down as you play. A bit like in a live escape room where we have a pile of "discarded" clues and locks so we don't try to use them again. This was more a fault of us trying to rush through, than the game itself.

Also - as these games aren't monitored by a live host, each puzzle has a hint system where you can ask for up to three different hints before finally asking for the answer if you are completely stuck. This at least means you can continue the game to the end and complete the story, which would be very satisfying if you are having trouble.

What we realised playing this game - is that nothing can really replace the thrills and fun of searching a room, finding clues and then having that real Eureka moment, but these online puzzles are a lot of fun, and are a great way to bring people together. Perhaps even after the current Coronavirus lockdown, events will still offer online rooms like this, as its a great chance to play with friends all around the country and even further.

We really enjoyed CSI Grounded and solved the mystery in just over the hour, with the use of just a couple of hints along the way.
So why not grab some friends together and book yourself a seat on this plane? It's a one way ticket to murder and only you can solve the mystery! The Happy Institute has always been a heavily talked about escape room, where visitors have sung its praises for originality and great hosting skills. We went along to see for ourselves whether this escape room lives up to all the hype.

We were immediately met by our Doctor, who remained in character throughout the whole experience. Love him or loathe him, he was manic, fun, energetic, and at times ridiculously well hidden to give the group some great scares. We were at the Institute to test Risus, a new drug to prevent negative feelings, meaning happiness is the only way forward. Our group eagerly crunched down on a pill, refusing to listen to any of the doctors possible side-effects speech.

We were then ushered to start the game in smaller groups in different rooms, meaning that the unsettling nature of the game started within the very first minute. The game started in very bright white rooms, which gave us the confidence to individually move between rooms to try and find clues. Our confidence was soon shattered once the lights went darker and the doctor was appearing at various times, in various places, making us feel like we had no sanctuary.

As the side-effects of the medication started to kick in, each puzzle became harder to solve, meaning the group knew they had no choice but to separate and complete different puzzles to try and get out. This room had no timer, adding to the frantic nature of the game in that we had absolutely no idea what time we had left to escape.

Some of the puzzles in the Institute were new to us which showed that no matter how many escape rooms we do, we may always come up against new puzzles and locks that we have never seen before.

Despite the mayhem and panic, we managed to escape with four minutes left to spare. The escape scene was a brilliant one, that we won’t give away in this review, but will say, it it was witnessed by various strangers visiting the panic room building. We thoroughly enjoyed this escape room and can now join in on all the hype and spreading the good word about the amazing Happy Institute experience!

​Gilman Hotel and The Dollhouse
​​

As part of our Halloween tour we just KNEW that we had to visit Panic Room Gravesend. We had heard good reviews of both The Dollhouse and The Gilman Hotel but couldn't decide which one to do - so in true ScareTOUR style we decided to do both!

We started with The Dollhouse which we entered knowing absolutely nothing about and soon, found ourselves handcuffed and caged in the dark. Our escape then involved an intriguing mix of puzzles, brain teasing conundrums and a few physical elements we had never seen in a room escape before. The room relied on a number of techncial effects that blended perfectly with the puzzle solving and slowly the room revealed its darkest secrets to us. Of course being a horror themed room, there were plenty of tricks that left us screaming and running away from certain areas of the experience. We thoroughly enjoyed this room and as you can see from the picture below, we escaped with just 14 seconds spare.

Our second room was The Gilman Hotel - a Lovecraftian homage set in an old fashioned hotel. The set theming and design of this room was stunning and with the addition of some extra scares, had us extremely tense throughout. It was also one of the hardest rooms we had escaped from and we had to call on the clue master several times as we were stumped by one particular puzzle. Even knowing the answer - we do struggle to think how anyone would have got it - it just seemed like one logic jump too far - but then if we had more in our group, maybe someone would have got it. The unusual thing about this room was the fact that not all clues needed to be solved. Alongside the main quest for the exit key, there were a number of artifacts that could be collected on the way. We missed two of these but got out with 4 minutes to spare. We could have gone back in to find them but after a tense (and often scary) 55 minutes, we were happy to be back in the outside world.

Having experienced the two scary rooms, we really now want to try the non scary ones as we were really impressed with the level of detail, ingenuity of puzzles and design throughout. The team have just opened a huge dinosaur themed game that sounds fun and we hear that a few more horror themed rooms may be on the way. Seems like we will be down in Gravesend a lot during the Halloween off season! 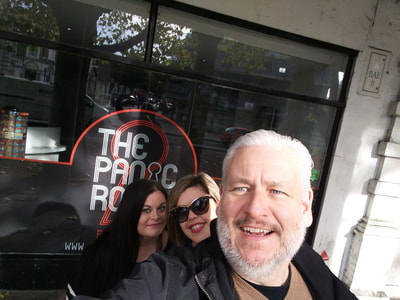 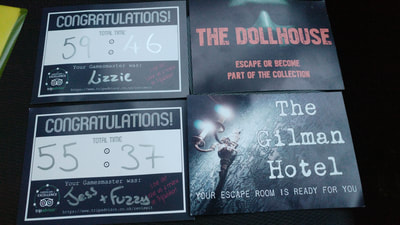