The evening had not gone quite as I had expected. I was on a city trip in Budapest with my girlfriend expecting to see the sights, go to a hot water spring spa, spend the evenings at their famed ruin pubs, something like that. But here we were, just the two of us at a dark abandoned bus terminal, somewhere in the outskirts of the city, surrounded by industrial buildings and large blocky flats, without a clue where we could find this “Nightmare in Budapest” haunted house. The build up had already been scary enough – a website that was very sparse with their information in English, the tourist information offices that had never heard of the place, a phone call that had instructed us with typical Eastern European blunt straight-to-the-pointness to be there at 7pm sharp. With three minutes left on the clock, we spotted a banner for the haunt, directing us through the metal gates of an abandoned industrial yard, towards a big hangar. You can imagine that after all that, our tension levels were extremely high! 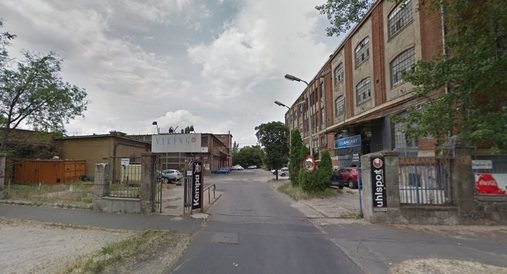 Image from Google Maps – The entrance to the haunted house is around the bend towards the left. This, all alone in the dark, in a city where you don’t speak the language. Perfect.
One last “Is this really a good idea?” glance at one another and we went through the door, into a reception area, where we could leave our coats and were allowed a last bathroom break – in a bloody mess of a room with flickering lights. Still just the two of us, the attraction started off with a typical introduction/rules check, an invitation to “meet the family” and with a final “Hold on tight to each other” we were pushed through the door, into a pitch black hallway. Now, this wasn’t advertised as a hands-on haunt, but it took maybe ten seconds before this was made painfully clear to us, as actors tore us away from each other. We were teased mercilessly, time and time again actors found me in the darkness with a precision that I still cannot understand. Completely disoriented in the dark, I was eventually dragged into another dark room, filled with hanging meat bags and lit by a strobe flash every 5 seconds or so. The first flash, I only saw the meat bags, the second flash I had run to the opposing wall, behind a bag, in an attempt to hide from whatever might be in there, flash number three presented me with a scare actor right in front of my face, who proceeded to drag me through the room, whispering vile things in my ear, until I was directed to play hide-and-seek with him. I hid in a frenzy, but to no avail, ha caught me within an instant and manhandled me into the next scene.

The rest of the haunt continued as a slightly less manic, but more personal experience with the actors. A lot of the linking parts played out as a solo experience, with some startle scares and light interaction, but for key scenes I was reunited with my girlfriend (whom I found gagged and bound to a chair at one occasion). In these scenes we really had to help drive the story forward and interact with the actors, who all spoke excellent English and were just the right amount of creepy. Run of the mill stuff really (the medical experiment, the cannibalistic brother etc), but executed with such a high level of professionalism that I had no problem whatsoever going along with it. Especially with  the addition of a “good” character, who genuinely seemed to care about our fate, which heightened the level of immersion, as he would go on to play a key role in our escape attempt at the very end. 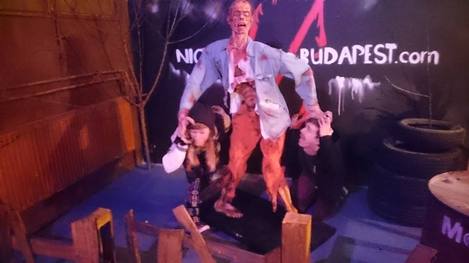 The entire thing was far better than I had anticipated. The actors were great, the touchy-grabby approach guarantees really tense situations, and there was a higher level of personal interaction with the actors than I had ever encountered before (not that I’m a haunt veteran, but still). In the more panicked parts, actors were relentless and actually had us running for safety. I loved the fact that your part in the whole is always more than just a spectator who goes through the motions, from the very beginning you are dragged into the experience, and it doesn’t let up until you are out the door again, catching your breath. All in all a great mix between high impact, adrenalin-fueled scares and story-driven interactive set pieces. It’s not unlikely that with there being just two of us, we got a more condensed and hectic show than bigger groups would get, but I’m quite sure they won’t disappoint either way.

Also noteworthy, in the same period as we visited, we saw promo photos popping up online with completely different actors and scenarios (clowns, ghost girls, …) than we had encountered. Apparently, they are able to host multiple scenarios, depending on which actors are available, the venue is large enough for this to happen too. I have seen parts of the haunt that my girlfriend hadn’t and vice versa, so I imagine that experiences can differ significantly from visit to visit. In conclusion, definitely recommended if you want to spice up your city trip in a unique way – it’s open all year round.

For more details about Nightmare in Budapest - check out their website