Jungleland is a giant children's play centre and Laser Arena in Telford so when they announced Halloween Fright Night (their first Halloween event) we thought we where in for a night of light hearted spooky characters and family fun. This may well be the case for the downstairs play area, but upstairs it was a very different story indeed: 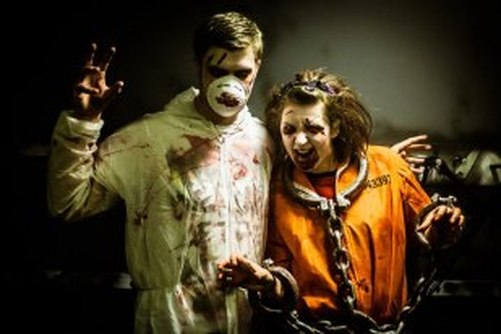 Two of the residents from Mission of Fear

Mission of Fear is located in Jungleland's new Laser Invasion Arena, but all the laser quest gun have been replaced by zombies! The maze was slightly out of the way (being on the 1st floor), but this worked to the centre's advantage. Being located out of site of the Spooky Party Rooms and the smaller children's play areas, it ensured the very young children didn't see anything too scary but with the use of scrolling signs and tannoy announcements, Jungleland made it very obvious that there was something very scary lurking upstairs. As soon as we went upstairs we noticed a complete difference in atmosphere as we left the bright lights and lovable characters for a very dark and dingy looking corridor. After a pre-recorded video synopsis of the attraction rules we lined up and waited for our turn.

So, this maze is located within a children's play centre, so it cant be too intense, right? Wrong! Jungleland went all out to scare and with an actor around every corner, smoke machines, strobe lights and lasers, it had all the ingredients of a full scale bigger budget horror maze. Certainly, the screams of terrified customers could be heard coming from all directions!


The maze was a little short, only lasting approximately 3 minutes, but adding on the pre show briefing room the whole experience lasts around five minutes  Not long enough for most horror mazes, but long enough for anyone who wanted a quick fright with their children (or indeed without children). With adults prices costing just 50p, we would have to say this is the probably the best value maze we encountered this year. To get that many scares for just 50p was incredible! Although  It was obvious that Jungleland has a smaller budget than most scare attractions they had made an effort to make the maze look professional with numerous places for the very lively and interactive actors to get multiple scares. Everyone around us (including us!) ended up running for the exit to get out!great success with everyone running for the exit.

In the venue's usual part rooms were some fun and friendly trick or treat games with some lovable spooky Witches and Vampires. The games were perfect for children, including simple yet effective Bat Throwing games and ghost making giving the whole room a real 'Trick or Treat' feel. Although the party rooms where nicely decorated, we do feel more could have been done to fill the space in terms of theming.
As well as the Spooky Party Rooms, Jungleland put on a great show for children downstairs, with a fancy dress competition and a Fright Night Disco party in the disco room. The only downside we felt was the 'play centre' atmosphere. With all lights on and music not loud enough, it was very obvious we were in a play centre and not anywhere special for Halloween  Maybe some louder Halloween music, more decoration and perhaps some atmospheric lighting around the play area would help in the future?
That said, we must commend Jungleland for their first ever Halloween event. With the place almost packed out and with many happy children and parents its obvious that everyone appeared to enjoy themselves. In all, Jungleland put on a nice package for all age ranges, we look forward to seeing what they may bring to the table next year.

Having taken our 2 yr old granddaughter as a treat to Jungleland we were amazed to find it had been decorated for Halloween. All the staff had made an excellent effort. Costumes & make up were perfect. Everybody there, customers as well as staff appeared to be having a fantastic time. The food/drink prices were much better than other places we have visited this year. Having ventured upstairs we were amazed at the transformation. Mutated limbs, dead bodies, zombies, even a chainsaw wielding zombie. Although the experience only lasted 9 or 10 minutes we were very impressed with the whole experience. Our granddaughter loved it as at 2 years old she was too young to understand what was going on & thought it was a great game of peek-a-boo. It definitely had my heart racing. Will make a point of going again next year. Hearty congratulations to all concerned.

Also visited Jungleland fright Nights or any other events this year?  - tell us what you thought here