When the London Underground was built back in the late 19th century, a stop was planned at South Kentish Town, and for several years, the now named Northern Line would stop at this station. But being so close to Camden Town and Kentish Town, it was soon decided that the stop was redundant, and nearly 100 years ago it was closed up for good. It was only really used again during the second World War, as a bomb shelter during the blitz. It also featured years later in a famous tale by Sir John Betjeman, where he talked about a true incident when a gentleman accidentally alighted at the station. It would seem that the story of Mr Brackett has inspired the current residents of the station to create an immersive escape room called The Lost Passenger.

First off, even upon entering the building we were immediately taken aback by the dank and dusty atmosphere of the station. Original signs for the blitz, enticed us deeper into the tunnels, and led us to the lockers and our first briefing point. The atmosphere of dark, spooky rooms, pervaded throughout the whole experience, and the makers have worked hard to keep this incredible atmosphere, despite some very modern tech in the experience.

We obviously cant give too much away, but like the best escape rooms, we entered The Lost Passenger with no idea what to expect and were surprised at how the whole show started. Reeling from the opening scene, we quite quickly worked through a number of physical puzzles, despite the sudden noises and more around us. Fans of seeing us scream and jump would have loved our reactions to certain aspects of the show!

As we progressed, we were surprised how hands on the show was. We are used to multiple locks and keys, but this experience doesn't have any traditional locks, and so everything we had to resolve included flicking switches, pulling levers and pushing buttons. The pure physical nature of these puzzles were exhilarating, and we genuinely feel like our actions were impacting the solution, and not just a random key/combination to open a lock. We must note how technical the show is, as although everything looked aged and Victorian, it obviously knew if we were doing things right or not, so there was a high level of modern technology hidden underneath.

We did find that a few of the puzzles just required following an instruction, and we must admit to requiring a couple of clues, but we were advised afterwards that the room only has a 60% escape rate and we had powered through some of the puzzles quite quickly. Talking of time - there was no sign of a clock until right at the end. We had no idea how we were doing and the sudden appearance of the clock only made us fight even harder to escape. We are pleased to say that we escaped with just over three minutes spare!

We experienced this room with 3 people which felt like the right number due to the small rooms and experiences involved. We were able to see and work on all the puzzles at the same time without being too crowded. We wouldn't recommend a group much bigger - especially not if any of that party are at all claustrophobic, as the rooms are very small.

As a summary, we can categorically stare that The Lost Passenger was one of the most atmospheric escape rooms we have ever done. The story, setting, theming and puzzles all added up to create an exciting but challenging experience in an incredible location! We would definitely recommend a visit! 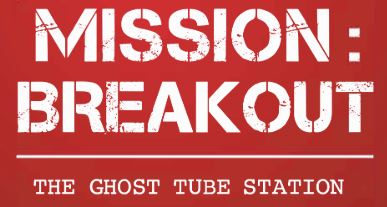