This new production at the Blue Orange Theatre recently opened for a limited run as a double header starring Toni Griffiths as Annie Wilkes and Darren Haywood as Paul Sheldon. As a new interpretation of the classic Stephen King novel, this production examines the price of fandom and chronicles two differing characters as they spiral in and out of a depressing cycle of misery for all involved.

Misery is actually the title of a fictional character killed off by Paul Sheldon in his latest novel but this play is not about some literary heroine. She is just a plot device for the true misery that both the characters endure.

The most obvious misery, sits with Darren Haywood’s portrayal of Paul. As the main part of the play opens, he is a broken man lying in bed, and we soon get to experience the excruciating agony he is in. Darren’s performance is so powerful that at times you want to get out of your seat and go and help him. In a number of very long, dialogue free scenes, the theatre rings out with his yells of pain and frustration. It’s raw and uncomfortable watching as it's so totally believable. Paul’s situation appears to be completely helpless and at times he seems to be losing his grip on reality. Maybe it’s a coping mechanism or even the drugs talking, but it's incredible to watch a man slowly being driven mad by his predicament.

Annie’s misery is a more interesting one. Unlike some other versions where Annie Wilkes appears as a monster throughout, Annie is actually likeable at times and can sometimes come across as a sympathetic character. As more of her history is revealed, Toni Griffiths' portrayal is both moving as well as chilling. This woman isn’t your typical horror story “bad guy” but a woman very clearly teetering on the edge of a very dangerous precipice.  It’s a credit to Griffiths' amazing characterisation that we can see some of this internal conflict for ourselves. Whether this is madness or whether this is just evil is left to the audience’s imagination but when Annie is speaking, she holds the attention of everyone.

The final misery is ours as the audience. Good horror is designed to shock and confront and this show does it in bucket loads. Our emotions are cleverly manipulated through laughter, disgust, fear and revulsion. It’s actually very uncomfortable viewing at times due to the closeness of the characters and the action. 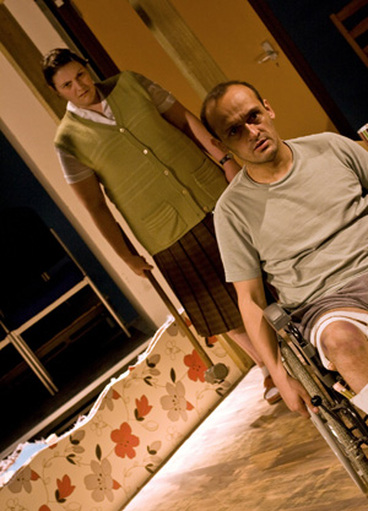 The set design was a masterpiece of deception that allowed a virtually unrestricted view of the events unfolding yet still managing to portray the small and enclosed nature of the temporary prison Paul finds himself in. In fact, due to the closeness of the audience seating, the set felt even more claustrophobic with the audience itself forming part of the walls that trap Paul from his freedom. With this feature we became complicit with Annie’s crimes and when Paul started shrieking with agony, we were all just a little too close for comfort!

Added to this minimalist stage is an atmospheric lighting design that draws all eyes to the action on stage. Costume changes and stage exits are performed in front of us in darkness and never feel contrived. Annie sometimes populates the theatre space itself as well – walking between seats which represent other unseen areas of her house.

Director Oliver Hume, should be praised for the design and thought that has gone into the production. Although the space and design are important in creating the right atmosphere, the heart of the story lies with the two central performances and this is the show’s strongest card. Both Griffiths and Haywood, are 100% believable in their characters and the pair of them take the whole audience on an incredible journey to some very dark and twisted places.

It’s a shame that Misery only ran for eight performances as this production deserves a much bigger audience. As it is – those fortunate enough to see it, in this setting and with this cast, will know that they have seen a theatrical performance worthy of the best. Thrilling, moving and heartbreaking at the same time, it seems wrong to say it – but Misery was a complete joy to watch!

This reviewer has been a “fan” of the Misery property ever since first reading the novel in 1987 and avidly watching the 1990 movie starring Kathy Bates and James Caan. He also caught the ‘92 stage version in London’s  West End featuring Sharon Gless of Cagney and Lacey fame. Each production has made its own interpretation of the source material which, if anything – strays quite close to comical horror, with amputations, a potential chainsaw finale and a few extra murders. The movie version toned down some of these excesses and created the now iconic hobbling scene which you would think is far easier to stage than the original idea. Interestingly enough, the West End production actually brought it back and the first act culminated in a certain body part flying across the room as the curtain dropped!

The show has recently had a run in London starring Michael Praed and is about to embark on a new national tour starting in Bournemouth on October 5th. There are currently no plans for this Oliver Hume production of Misery to be staged elsewhere.
Both actors are seasoned scarers in scare attractions round the country. Toni has created the iconic character Esmerelda - star of Alton Towers and Tulleys Shocktoberfest, while Darren worked for several years at Warwick Ghosts Alive.