Montague Rhodes James (1862-1936) was a Victorian author of ghost stories and is famed for creating his tales set in similarly based quiet country villages or seaside towns. He also perfected a method of story-telling which has since become known as Jamesian, with a classic Jamesian tale usually including a characterful setting, a nondescript gentleman-scholar as protagonist  and the discovery of an object that somehow attracts the unwelcome attention of a supernatural menace, usually from beyond the grave.

Tonight's performance by R M Lloyd Parry of the Nunkie Theatre Company was at the Rosemary Branch Theatre in Haggerston, which was once a Victorian music hall. We entered through a warm and welcoming pub which boasts an open fire and serves craft beers, Czech draught lagers and a selection of good eats.
Up the windy stairs we were invited to the small black box theatre which seats 60-80 snugly on folding
seats each with it's own cushion.

The scene is set with an audio soundtrack that implied a scholarly background, familiar to James' work at King's College. On stage, an antiquarian selection that gives the feelings of an old tutor's study with musty tomes and volumes of ancient letters. The intimate space lit by a solitary candle beside an obvious favourite old library leather chair and side table.

The lights dimmed and in strode Mr Parry, who after lighting more candles, which help the audience to see his features, pours himself a scotch and water as he settles into his favourite armchair to begin his narrative.

Immediately we are transported into another time and era all by the language, the setting and the deportment of Mr Parry. He is an excellent orator and leads us into the antiquarian tale with skill and competency. The first tale of the evening was Number 13 and was delivered with an air of bemusement and delight. Set in Jutland in about the mid to late 1800's, the characters in this tale came alive fully and Mr Parry engrossed us entirely.

The second tale Count Magnus started similarly but was a slightly faster paced story which took the audience into Sweden, and using names mysterious and strange a setting was woven for the story to unfold. Recounting the tale from a series of small notebooks that the protagonist had inherited we encountered churches and graveyards and even some ghouls who abided there. The feint of heart should have prepared themselves with Dutch courage as Mr Parry scares and delights in equal measure.

Next came Lost Hearts, a tale about missing gypsy children, alchemy and revenge. The story twisted and turned but was never predictable. Mr Parry obviously enjoys this tale and the extra oomph in his performance is vividly apparent. We were  taken to Aswarby Hall in Lincolnshire for this chronicle, and met servants and masters alike. The marvellous scenic descriptions led this reviewer to immerse himself completely in the 1811 set plot and feel like we were walking beside the characters throughout.

Ready for the final drama, Mr Parry re-entered the set and delivered the opening of A Warning To The Curious - a story we were aware of from an old BBC television production. Set in East Anglia this tale brought together both the warmth and deathly cold characters of the area and time. Two old friends on holiday meet a stranger who recalls a weird occurrence and conveys them through an ancient rite. A gruesome ending to this one completed the offerings at The Rosemary Branch Theatre by Mr R M Lloyd Parry.

The stories are usually presented two at time but we decided to see both shows meaning that we got to encounter all four stories in one go. Four long monologues from one person should, by all accounts be a bit of a marathon to sit through, but the impressive presentation of the stories and the skill of Mr Parry made us feel that we had actually witnessed these tales as if they had been relayed to us by the author himself.

If you love old fashioned ghost story telling then you we can heartily recommend this impressive piece of theatre. 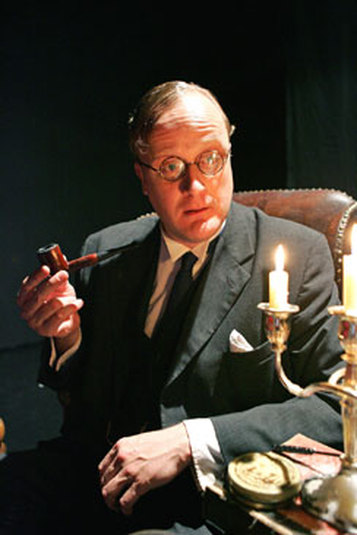 Seen this show or play a few years back when he visited my local theatre. He tells M.R.Jame's tales well. The theatre he played near me is quite an intimate theatre, we were all within close quarters of him.

I thought it was quite a clever way he performed it to an audience. I think he would be good at Edgar Allen Poe's, The Raven. If he comes to a town near you, definitely worth checking out if you're familiar with M.R.Jame's work. Even if you're not, he'll send the shivers down your spine.

Also visited M.R James Ghost Stories  or any other horror plays? - tell us what you thought here