This Halloween season, Stingy Jack has returned to all the UK Dungeons atrractions. The shows are slightly different depending on where they are located, so we went along to London to meet this nasty fellow for ourselves! 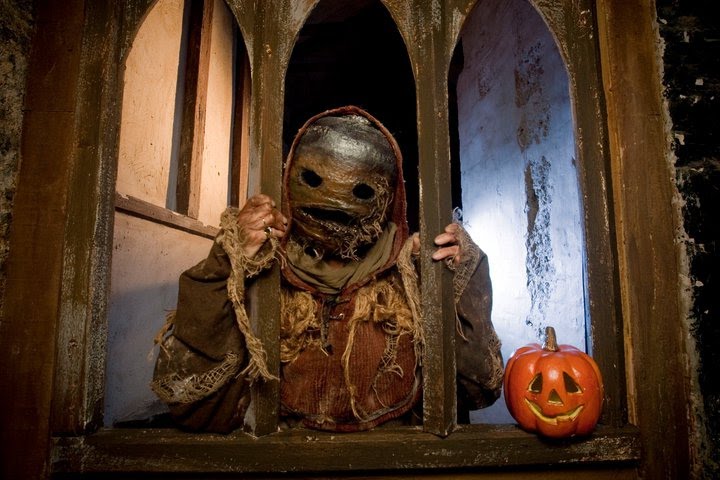 Visiting London Dungeon on a half term during Halloween is always a challenge in itself.  On arrival at the tube, two huge long lines trailed out from the main entrance with people queueing patiently to get their fill of horror themed fun. The attraction was doing a good job of pushing people through the opening scenes but this ultimately made everything feel a bit rushed. Also, with full capacity groups, each room felt a little too squashed and unless you were near the front, it was easy to miss what was going on.

Unfortunately, this was the case with the Stingy Jack scene, as while the front of our group screamed in terror when he appeared, we couldn’t actually see anything from the back.

Following the Stingy Jack section, the tour continued the normal route through the dungeon, taking in the usual rides and shows. Maybe the actors were tired or maybe the crowds had gotten to them, but the performance levels throughout were much less enthusiastic than they usually are. With such a large and boisterous group, the actors needed  to engage the audience and demand their attention more . As it was, there were many times we had to do a loud theatrical SSSHHH just to keep some of the group in check!

It feels a bit unfair to criticise the Dungeons for the poor experience caused by a bunch of rowdy foreign teenagers in the group, but not once did an actor or member of staff tell the group to tone down their behaviour.

Finally, after a small breakdown on Traitor: Boat ride to hell, when we got separated from the group, we asked an Entertainments Manager if we could continue without the noisy group and as such the second half of the show was far more enjoyable, including Vengeance – the new ride for 2011.

When we first experienced Vengeance at Easter we enjoyed it, but found that the guns were useless and didn’t add anything to the story. Following an extended rehab this Autumn, more functionality has been added, so that if you hit a creature on the main screen a small blood shot appears . It doesn’t seem to impact the storyline (ie the creatures don’t die if shot many times) but it does feel more satisfying. Of course, the highlight of any trip through London Dungeon is that final plunge to your death on Extremis, which still packs a punch no matter how many times we ride it!

Unlike many attractions, the London Dungeon is constantly evolving and following such a major investment as Vengeance , they should be commended for even trying to hold a Halloween event as well.  As it was, the addition of Stingy Jack was slightly disappointing as he only appeared once, when there could have been a number of opportunities for him to pop up, as if he was stalking us through the venue.  This would have connected the whole story together and differentiated the Halloween event from the standard Dungeon fare.

Stingy Jack has been around for a few years now and if  he is to return in 2012, we hope the Dungeons team find something more interesting to do with this exciting character.

To find out more about - visit their website at www.thedungeons.com

an educational scare attraction over anything. learnt alot about the sortys in london while doing so in a creepy enviroment. the actors seemed to have a hit and miss approch with some notiably better than others such as the ladys in the jack the ripper scene, mrs lovet, the guy in the surgery scene and the judge. some of the other actors just seemed to be reeling off a script and though trying there best didnt really come over as interacting with the audience or making the most of the enviroment around them. this place suffered badly from one of my most hated things of all attractions. great scenery untill you look up and you see bare celings, cables and pipework. id like to see the scenery finnished off by just layering somthing over the roof so you couldent see this where it dosent need to be seen.
overall a great attraction and worth visiting but not a terrorfying one, good enough to get a few scares but its educational not frightening but since thats the whole point of the london dungeons it just seems to be needing some extra themeing and a few more highly trained actors

Also visited Stingy jack at London Dungeons? - tell us what you thought here