One of the best things with the growing scare industry is seeing some of the originality that different attractions bring to the party. So when the Loco Horror Train was announced, a 75 minute train journey featuring zombies, ghosts and the unexpected all along a desolate heritage train line departing from the sleepy town of Dereham, it was a no-brainer that we would pop along!

Our experience started just outside Dereham station which looks fantastic as it is lit up and marked by giant searchlights spreading out across the town. We were led into a tent where we could grab a drink and mingle with our fellow passengers (and a few other creatures) before we started our journey.

About 10 minutes before departure, our host for the evening took to the stage to set the scene before leading us out to our awaiting train. We have to admit, we were rather excited as we walked along the desolate platform, filled with stage mist, toward our awaiting carriage. Boarding was very quick and it wasn’t long before our train departed.

Loco takes place along the Mid-Norfolk heritage line which leads out of the town and into the countryside, away from all the lights of civilisation. However it does take a little time to do so. To try and counter this wait at the beginning, we are told a story of Robert Loco, the old driver of this very train on this very line. However the story set-up isn’t very long and we spent around 10 minutes of the experience simply listening to spooky music with a few lighting effects. It’s understandable that the scares don’t start until you have left the town, but a little more to fill this void wouldn’t have gone amiss.

Once away from the town, the real experience begins. There are a couple of ‘disused’ stations on the line and it was great to see these used, not just lit up but with actors outside the train acting out scenes as we pass by. Our only criticism here is that they could have been longer – instead of stopping at the stations, we simply pass by meaning the scenes are very short and seem like an underuse of the actors.

We are told however that souls of the departed like to join passing trains and before we know it, there are actors in the aisles. Loco claims to have over 70 actors working the experience and although we didn’t count, we certainly saw a huge variety characters along the trip. And they certainly were characters – as the experience lasts so long unlike the majority of horror walkthroughs, the actors have time to develop their own characters and backstories and they use these to great effect as they pass through the carriages. The acting quality is also very high with everyone we encountered improvising to our reactions and comments, helping to keep the experience immersive and interactive.

It was great to see so much energy from the acting team also, with our creepy characters literally jumping over seats, rolling over the tables and at one point even cutting the our nasal hairs – don’t ask! All this is complimented by the lighting within the carriage. Four powerful colour-changing lights in every corner of the carriage create a great ambience and some very striking strobes which the actors make great use of. It was very effective, if a little random with strobes happening for the sake of it, not because of any specific action happening.

The whole experience is very entertaining and creepy as well as very funny – we were frequently splitting our sides – but it isn’t something which will scare the majority of Halloween scare lovers. That’s not to say there aren’t any jump scares, there were certainly some unexpected moments, but there’s nothing that’s going to genuinely put you on edge throughout the experience. That’s not what this journey is about, it’s a theatrical, eerie and funny experience which tells a Halloween story in a very unique way. Personally we really enjoyed it for that, but anyone expecting a to be frightened may be slightly disappointed.

Another slight issue the experience suffers from is the pot luck of where you are sitting. By the very nature of how seats are positioned on a train, some passengers will get more interaction than others. We were very lucky on our run through and found most actors gave us a lot of attention, but we did see many others who didn’t seem to have as much luck and can see how you may get a vastly different experience depending on where you are sat.

​After 75 minutes, we pulled back into Dereham station, thoroughly entertained if not overly scared. As a nice final touch, all the actors ran off the train with us and we ended the evening being chased out of the station grounds by some of the ‘friends’ we made along the way. The Loco Horror Train is a great piece of theatre and a very unique experience which we really enjoyed. If you’re looking for high octane scares then this probably isn’t the attraction for you, but if you’re after a creepy Halloween story, brought to life by a very strong cast of actors in a unique way, then this is certainly worth a try. All aboard! 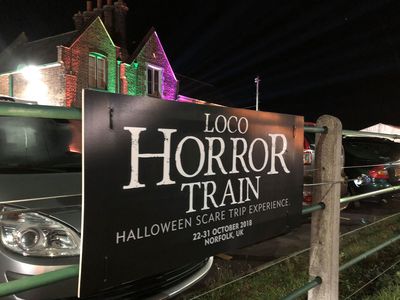 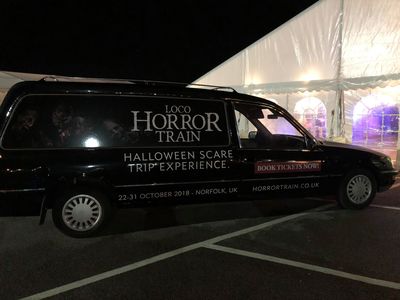 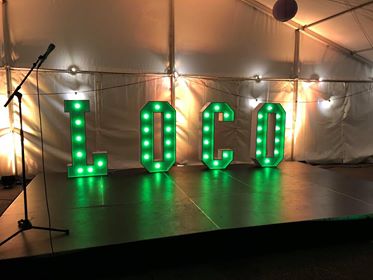 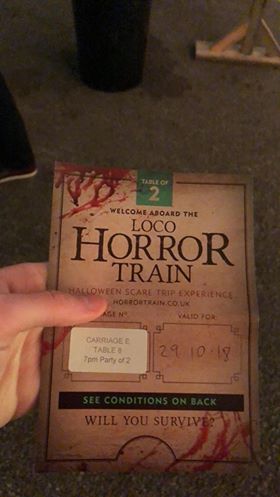 Not scary at all
Travelled 3 and half hours due to the presentation of the loco horror train and "how scary it was meant to be " and I can honestly say it was rubbish there was nothing scary about it. There was about 10 actors and the costumes were appalling the story was rubbish we spent most of the time sat still on the tracks with lights flashing on and off the train was not dressed and looked just like a normal I wouldn't recommend it to anyone it was just a quick buck made for the people who own it.... Spoke to a member of staff and my only reply was we don't offer refunds which i thought was hilarious. Loco horror train norfolk you have nothing on West Yorkshire scare grounds