The Ghostly Galleon is another of Hourglass Escape's physical rooms that has been transformed into a virtual game due to the Coronavirus pandemic. Like The Evil Dead 2 room we played last year (see review below), we controlled a live avatar as they explored around the room, entered codes and basically did what ever we asked them to do.

The room itself was full of unusual puzzles and items to search for, and on each discovery we would be given a code word to make that item appear in our Inventory screen. From here, we could interact with the artefacts such as moving puzzle pieces around with a mouse. This "playable" element of the game, helped to make it as fun and immersive as if we were in the actual room itself.

As with other Hourglass games, our live avatar was great fun, as she navigated us skillfully around the adventure, responding quickly to our requests, whilst providing a comical narrative on the unfolding scenario. We have said it before - but it must be hard to be a live avatar when so many people are saying "look here" or "do that". But our host was an entertaining part of the experience itself - a character in the story as opposed to just a person to control.

We finished the room in under the hour and although not as big and complex as Evil Dead 2 (the action is fixed in just one room throughout) we had a great time breaking the curse and escaping from The Ghostly Galleon! Well done to all involved! 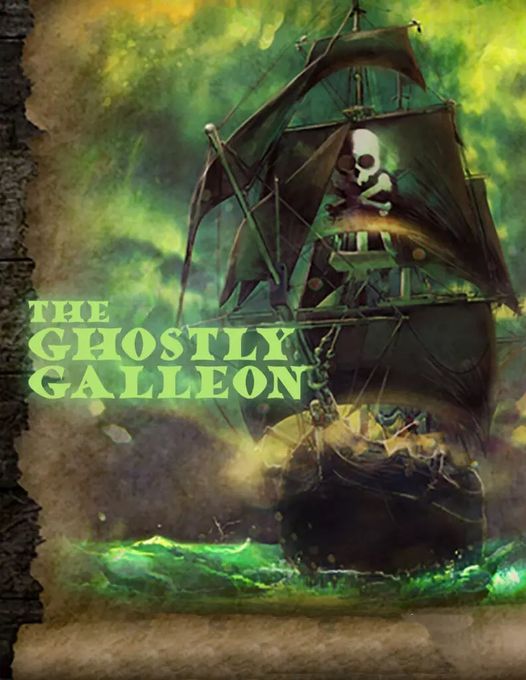 ​The Navigators and the Call from Beyond

The Navigators and the Call from Beyond is a new online point and click game with the vibe of retro 50s science fiction. Once the game starts - each player is given a number of different puzzles and clues which all work together to solve the overall puzzle to move onto the next stage. An example being the next two numbers in a numerical sequence from player A, turn out to the be map co-ordinates for the puzzle in front of player B and so on.

Fortunately each player can dip in and out of all the different puzzles so we were able to help each other when individual players got stuck. Despite a few input issues (point and click adventures can be very unforgiving at times if you don't enter the answer in the exact format) but it was generally that we had failed to correctly solve the puzzle as opposed to the game not co-operating.
Without any live guidance, there is a cheat screen for each puzzle stage which provides help and clues for any team that are really stuck.

Throughout the game, the graphics and sound effects are very stylised to fit the theme, and even includes spoken parts by actor Yuri Lowenthal! (also known as the voice of Spiderman!)

All in - we found this to be one of the more unique point and click online adventures we have played so far. The dynamic of the individual puzzles all working together to solve the overall stage puzzle was inspired, and added an element of originality and teamwork.

At under $20, this game is great value for money, and is definitely worth checking out while waiting for live experiences to open up again!

As we enter week 8 or 9 of Lockdown, we have been looking further afield to get our escape room and horror fix. Therefore being massive fans of the original Evil Dead movies from the 80's, we booked our virtual experience the second the tickets went on sale.

The game itself is a re-purposing of an existing room, and as we played, we were in control of a live character who could look around the room, enter combinations and generally run around at our beck and call for 70 minutes. What worked so well was the camera was effectively body mounted, so the actor could easily manipulate the puzzles and locks and give us the best view of what was going on.

The theming and story of the room are lifted directly from the movie and really conjured up the scary atmosphere of being locked in a cabin plagued by deadites. The sets have been based on the actual movie designs, and there are several filmed elements that seamlessy integrate into the practical sets.

The puzzles themselves were mostly practical with only a couple of padlocks throughout the multiple rooms. And the padlocks seemed sensible where they were, not like some random locks put on drawers and desks just for the sake of it!

We would have loved to have been in the room when some of the magnetic tricks unlocked. Even when playing from home, there was a really satisfying sound when things were placed correctly and secret doors and panels were triggered.

The other unique thing about this game was the use of the inventory section. When we found or saw a particular clue, the games master would give us a code so we could add this to our inventory in a second window. This meant we could go back and refer to things ourselves without asking the host to try and focus the camera. At one point (just like in a real live escape room) two of the team worked on a particular puzzle while the rest of us explored the cabin.

All in - we cant find anything negative to say about this incredible experience. Everything from the game play through to the presentation and the clue system was flawless, and Seth our games master (who was in character throughout) was brilliantly attentive.  A lot of people ask whether online virtual games like this can be as immersive as actually being in the room itself, and we can categorically say that they can be.  The fact that we were able to play a room in Seattle whilst sat in our respective houses in the UK, and still have an amazing time, is a testament to all the team at Hourglass escapes. If they turn any of their other rooms virtual, we will be book them in a flash (they also have a Lovecraftian room, so it's clear the team love their horror!)

So what are you waiting for? Once lockdown is over - this room will revert back to being a physical one, and those of us over here in Europe would need to travel to the US to play. They are only taking virtual bookings til mid June, and there are very few slots left. We can not recommend this room enough, and this could be your only chance to play!