When it first appeared in London last year as part of the International Mime festival, critics and audiences were stunned by the originality and bravery of Horror, by Swedish based Jakop Ahlbam. The show is back for a limited run and is still gory and terrifying, giving viewers the chance to witness some things probably never seen in live theatre before.

The show is effectively a best of compendium of dramatic deaths, gore, chills and thrills. In fact if you love horror movies then you will recognise so many elements that have lovingly been lifted from some of the best films. There's a backwards spider walk from The Exorcist, malicious spirits crawling out the telly like The Ring, and an axe attack that could have come straight from The Shining.

The story itself  involves a vengeful spirit, wrongfully murdered by her parents, and is all told through flashbacks, as we see what happened to her and her sister - the present day heroine of the story. We should point out that there is NO dialogue at all in the production - the only things to utter from any of the cast are anguished screams or demonic sounds. This could have been a problem, but the production is put together so tightly that even if you don't always quite understand why something has happened, you can still enjoy the show. For example - the four dark spirits that rose out of the bathwater. I still don't know what they were meant to signify BUT it was horrifyingly scary seeing them appear!

It's really not giving anything away to say that most of the cast get killed in ever more elaborate ways, but when the heroine is faced with a final confrontation with 5 reanimated corpses , the action ramps up to chaotic level. The stereo is knocked on accidentally, and to the loud and rambunctious guitar squeal of The Osmond's "Crazy Horses", we are treated to an extended fight scene that wouldn't look out of place in a modern day movie. Limbs are lost, sharp instruments are shoved where they shouldn't be and blood splatters everywhere! It really is a complete assault on the senses, and happens just 10 feet in front of the audience. This is not a standard night at the theatre!

The show runs for 80 minutes with no interval and the time just flies by. From beginning to end you are drawn to the stage, which works in the show's favour as there are so many blink or you'll miss it moments. Things appear and disappear in the blink of an eye and several times you are left with the feeling of "did I just see that or not". The cast make the whole thing look completely natural  whilst requiring some pinpoint timing and accuracy. Some of the illusions  and effects would be ruined by less capable performers.

Due to the silent nature of the show, it wont be to everyone's taste, but we absolutely loved Horror. The staging was suitably gothic, the effects were simply mind-blowing and the balletic mime-like nature of the whole production really enhanced the story telling. if you like horror, then we would implore you to see this while you can. 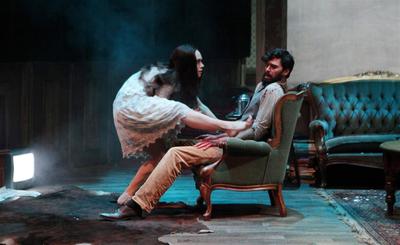 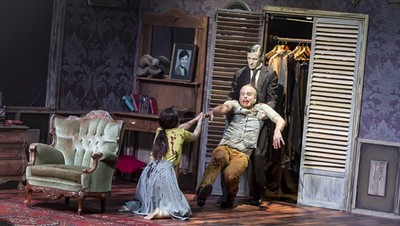 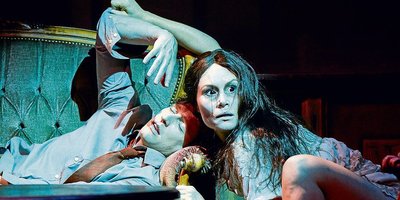 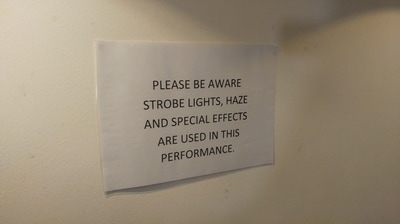 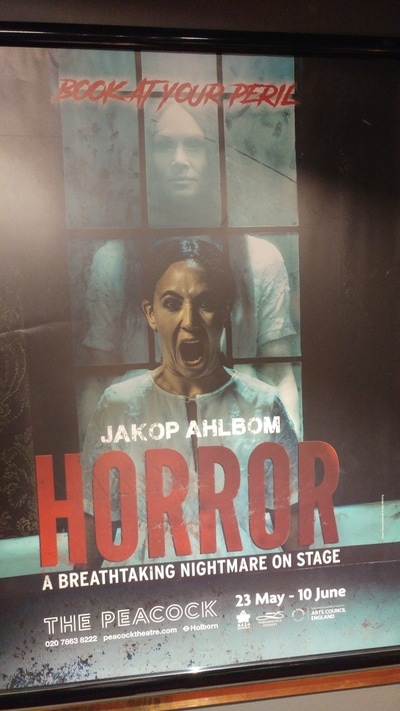 It’s always fascinating to uncover new ways to terrify audiences, so when we entered the Peacock Theatre with only knowing of the show through the billboard and the odd post on Social media, we decided to keep our prior knowledge of the show to a minimum and let the evening take us where it may.

Before curtains raise, we get the feel that there would be several homages to horror classics, from the cold lighting, suggesting it could be a wintery outdoors setting (The Shining), to the use of vintage music played from a distant gramophone (Psycho).

From the start, we are transported to the classic tale of a group of youths spending the weekend at a large state home, with all not being as it seems (further tribute to the Evil Dead franchise). We slowly unravel the mysteries that lay within the house, resulting in a fluid motion of chaos, as interpreted through the performers silent, choreographed movements (at this point, it should be noted that the entirety of the show is physical theatre, with only one line of dialogue spoken at the very end).

Not knowing what to expect, we were left dumbfounded as the show demonstrated a series of baffling illusions, from a young lady crawling out from the television set (The Ring), to a young man having his intestines removed from his mouth; a wide array of smoke and mirror tricks as these incredible, individual moments  tell the tales within the house that combine themselves together, paying tribute to the similar storytelling made popular by Quentin Tarantino; The youthful girl looking for answers, the estranged sister that wanted to be loved, the parents who discarded their rebellious daughter; all came together to one singular story and with one disturbing message from the dark visuals: “we make people happy”.
The movements within this piece seemed so smooth, with each extension serving a purpose, the lack of staccato during the frantically paced moments had made us uneasy, especially as we were attempting to surmise what the next illusion could be laid out before us.

There were moments that gave us the feel that all the characters were not actually together in the same place at the same time, as several cast members sported different costuming, or the archaic use of technology (from the newly upgraded smart phones on one end of the spectrum, to the old 8-track tape players, even the mid-1800s attire worn by the parents, suggesting that these could all be horrific events that have all occurred from the same house but at different historical points, a subtle nod to the first season of American Horror Story; perhaps this is where the name lends itself?), in any event, while this had seemed to be a distraction for some, others accepted it for what it was and went along for the ride.
​
It’s a challenging process to review a show without giving too much away, especially when the show itself cannot be seen as linear. Was it scary? There were moments which made us feel uncomfortable, but not ‘scream out loud’ scary; it’ll certainly have moments that’ll keep us guessing how they did it. Was it entertaining? Absolutely, again, the performances by the cast were highly energised, flowing between that and the distractions that lead us to the optical illusions kept us glued to the stage. Would we go and see it again? It’s of this reviewers opinion that it needs to be seen again to gain a wider understanding of the show, perhaps another review could come of it?