Last year, Margate Winter Gardens created their first ever Halloween event - Zombie Apocalypse, which proved to be a sell out success. Capitalising on their success, the zombies have returned for 2015 in a completely different format - this time spread the event had three separate mazes.

The first thing that really stood out when entering Hellgate Winter Gardens was the building itself. From the outside – there didn't appear to be much happening and as we wandered down the staircase to the main event area, we were unsure if we were in the right place.  But once downstairs, we only needed to follow the heavy rock music and the sounds of screams coming from within...

The main room of the Winter Gardens is a really impressively decorated building with period touches throughout. Of course with the pumping music and appropriate spooky filters on the lighting, the whole thing has been turned into something more akin to a cathedral of scares. Certainly the noise level and theming created a great atmosphere - it was just a shame that so much of the space was taken up by Heras fencing covered in black plastic wrapping, which was being used to disguise one of the mazes. With the other touches around – roaming actors, a  couple of stalls, some theming elements – it would have been nice to see something a little more decorated and appropriate to the story.

But we weren't there to look at the walls, we had three scare attractions to visit!

Quarantine continued the story that was first created in the Zombie Apocalypse show from last year. Led by a guide, we passed quickly through many backstage areas of the venue with zombies in hiding, ready to attack us. The show was quite panicky at times, with us trying to shut doors or gates behind us to try and stop the zombies from getting through. And these weren't just slow lumbering zombies, these creatures could move and were very physical in their approach. One particular highlight was a large Heras/strobe maze built on the stage, which seemed quite tame until a  massive explosion mad us jump and sent the zombies into a rage . This scene had us fleeing to get out and escape which proved difficult  due to a very large zombie with other plans for us! Even so, as the opening maze of our night, we found Quarantine to be a great attraction with some fun scares throughout.

Buried Alive was the maze built right in the center of the venue and has to the tightest crawl experience we have ever visited. Therefore with the ceiling of the tunnel pressing against our back for most of the route , it was disconcerting to hear (and feel) people hitting the structure to try and scare us. Alongside these physical scares, there were access panels where underground creatures were able to appear and disappear as well as a few access holes where they could use more tactile methods (when getting undressed that night we all found rice in some unusual places!) The route itself was particularly twisted and certainly involved a lot of feeling around in the dark. There were a few spaces where the tunnel opened out to allow you to stand up but seeing as these usually had actors in ready to pounce, we generally kept our heads down and kept crawling! We had a few scares along the way but the biggest scare came from the concept of being in such a small confined dark tunnel.

The final maze of the night was Dead Meat and this maze cleverly mixed up the scares by taking us outside of the main theatre building and into some old abandoned tunnels built into the cliff. The change of environment really added to the story and the tunnels felt more in keeping with the story. Still continuing the zombie theme,this time the doctors were experimenting on them and we were to witness the results. Obviously something was about to go wrong and we spent the rest of the maze bouncing between theatrical scenes mixed with some high impact scares. The final scene saw us chased out the tunnels with a clever twist on the standard chainsaw scare.

The key thing that stood out about the whole Hellgate event was that it really had a raw energy to it. The attractions were fast and scary, the setting was loud and noisy and we managed to get a good number of scares across the three attractions. And we weren't the only ones as screams could be heard from all around us. We look forward to seeing what the team come up with for next year.. 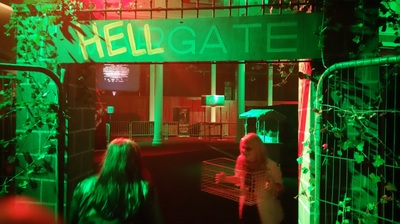 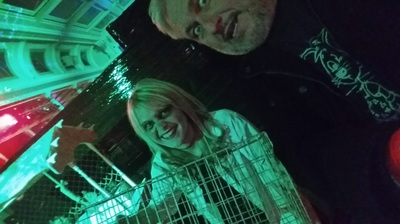 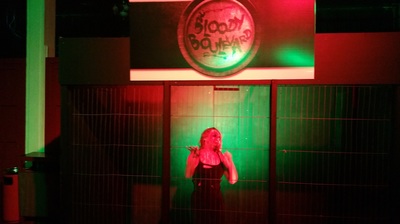 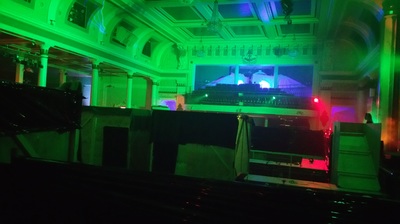 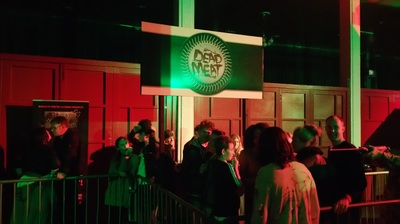 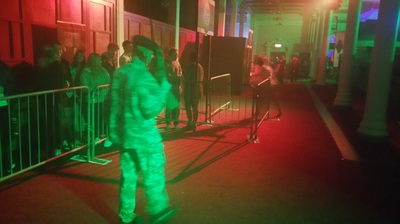