Haunting In the Hall - Cusworth Hall

Haunting in the Hall was a 2 day event held at the historic Cusworth Hall in Doncaster. One night was focused more on spooky family fun while the second night was aimed squarely at thrill seekers… 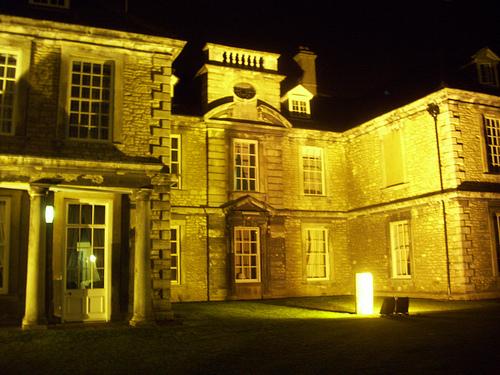 The house itself is a very impressive building and it is easy to believe that it could well be haunted. The team at GNG have delved into the history and found some of the legends and ghost stories associated with the house and the local land to inspire their event.

Once inside, the tour went from room to room and we encountered a number of different creatures including a fantastic wedding party, a bloody chef in the kitchen and a few other zombies.  We’re not sure if the zombies were historically correct but they certainly gave us a few jumps.

Each character we met along the way interacted with us in a fun way with just the right level of ad-libbing to make us feel involved with the story. Being asked to take part in the wedding scene was a particular highlight for us!

Like any stately manor house, Cusworth Hall has many large rooms with high ceilings and although it was interesting to see the rooms around us, the size of them meant the event didn't quite have the claustrophobic atmosphere of some attractions.

But saying that, we really enjoyed the experience and for just £3, Haunting in the Hall was fantastic value for money

Haunting in the hall was a two day event held at Cusworth Hall. Split in to 6 different scenes within the museum each with a mini story. After the standard safety talk we were sent through in to the first room, there was some sort of zombie clown that jumped out from his hiding place giving us all a good scare. The next room had a witch in it; she interacted well with the group and even singled out one person to stay behind with her sending the rest to the next scene. After a walk down a dark corridor we met another clown this one was telling jokes and acted as a holding spot before we went to the next room. This was my personal favourite, a wedding scene and we were the guests, after taking our seats we saw a bride and priest asking if we had seen the groom, at this point a male from the group was picked out to be the replacement groom, after some fun interaction there was a banging on the door and the real 'groom' appeared. After some more great interaction with these 3 characters we were sent on our way to another holding area with a jester who then picked two from the group to carry on alone. Then it was our turn for the final two scenes, one was a kitchen with a bloody chef and the final was a zombie type girl. Overall an enjoyable experience and well worth the £3 entrance fee, it’s just a shame the rooms in the hall are so big that it loses the atmosphere and claustrophobia of similar events.

Also visited Haunting in the Hall or any other events this year?  - tell us what you thought here