Ghoulies Haunted House runs all year round with its intense, very in your face, GHOULIES X show, alongside a child friendly version for the first hour each evening. However, throughout the year we are treated to seasonal themed makeovers and Christmas is no different with ‘Santa’s Grot Hole'

The show started similarly to the usual Ghoulies X show, with our safety briefing video and our decent to the infamous Red Door. Once we opened the door however, the attraction was turned on its head! Impact scares by snowmen, demented evil elves, Krampus and Santa himself made sure we had a horrible time. Not long into the attraction, we all found ourselves on the naughty list, Santa was reading our Christmas letters and a 9 foot Krampus was chasing us through the darkened corridors.

Santa’s Grot Hole gave some great scares along with some very funny story led scenes that gave us frights and laughs in equal measure. The attraction wasn’t quite as intense as the usual Ghoulies X show, but that’s a smart conscious decision when running a festive experience. Rather than running for the door hyperventilating, we were running whilst laughing at Santa’s dirty mouth and our twisted choices on our Christmas wish lists.

We extremely enjoyed our experience at Santa’s Grot Hole with the entire team laughing throughout the attraction, but also getting some quality scares by both actors and the fantastic animatronics. Santa’s Grot Hole runs every weekend on the run up to Christmas.
​

Ghoulies Haunted House and Horror Bar are now a full year old. Situated in Liverpool’s city centre and offering Physic Nights, Horror Karaoke, Reaper Pool and more, it was time for us to check out their Haunted House for the Halloween season

When we arrived at the Horror Bar, we ordered our flaming (literally on fire) cocktails for a little bit of Dutch courage before we delved deep underground to be ‘grabbed by the ghoulies’. After signing a waiver and watching the new health and safety video, it was our turn to meet the creatures that lurked within.

For the next 15 minutes, all hell broke loose! We were instantly split up and went through the attraction completely alone. This reviewer was whipped by a mistress, had a check-up by a demon dentist, played with killer clowns and got extremely friendly with a chainsaw!

From start to finish, this attraction is pure chaos and that’s why we loved it. Although the attraction is far more intense and hands on than your usual scare maze, it is still a far cry from any ‘extreme’ experiences, making it a perfect night out for anyone who is feeling brave.

The attraction did use foul language and a few sexual references throughout, something that some visitors may not care for. However nothing fazed us as we were too scared and running for the exit. Ghoulies Haunted House predominantly use masked actors which work well in their set scenes. They attraction also houses some of the best animatronics we have seen in the UK.

It's not the biggest but most definitely the most intense.​ 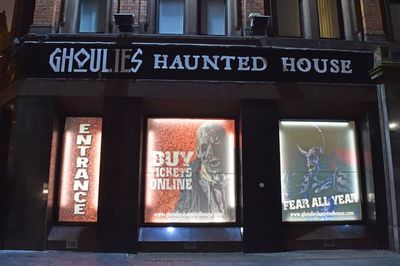 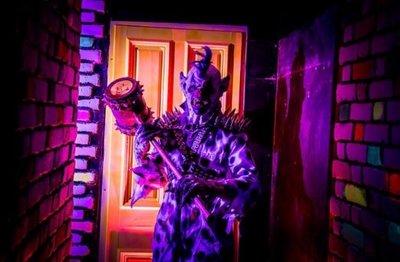 Ghoulies Haunted House opened up their doors for the 2017 Halloween season, and since then, they have been open every Thursday, Friday and Saturday to terrify thousands of daring visitors. Ghoulies is one of the few attractions in the UK that operate all year round. Each weekend they offer their ‘Haunted House’ show, suitable for slightly younger customers and then, when night falls ‘Ghoulies X’ gets up close and very personal with their prey!

We visited during their Valentines event ‘Love Bites’, and although it uses the same attraction as their year round event, we were treated to a slightly more theatrical performance. After we arrived and had a couple of stiff drinks at the Ghoulies Horror Bar next door, it was time to delve deep into the darkness of Liverpool city centre. We went down as a group of only two, which heightened the scare factor, as multiple actors would attack from every which way imaginable. We noticed that even if we had been in a larger group, there are moments where you will be split from your friends.

The attraction told the story of a torn bride whose Groom has suddenly turned into a werewolf beast creature. Once we met the groom, all hell broke loose, and Ghoulies Haunted House truly packed a punch. These actors were strong performers who were not afraid to touch, push and shove - but all in a very controlled environment. The attraction was actually rather intense, but didn’t push into the ‘extreme’ attraction envelope, this making it the perfect experience for these seasoned reviewers.

Two special mentions that we must address is that Ghoulies Haunted House not only used lots (and we mean lots) of actors, but it houses some of the best animatronics in the UK! The placement and timing of these effects were used perfectly to get the best reactions. We also loved that a certain chainsaw we were introduced to still had its chain on! Making one of our team use the safe word.

Ghoulies Haunted House was a fantastic 15 minute fright that pushes the boundaries compared to your everyday Halloween attraction, but ensures it stays away from becoming something too ‘extreme’. Add on the Ghoulies Horror Bar for some great music, drinks and atmosphere, and Ghoulies is a great night with a big fright! 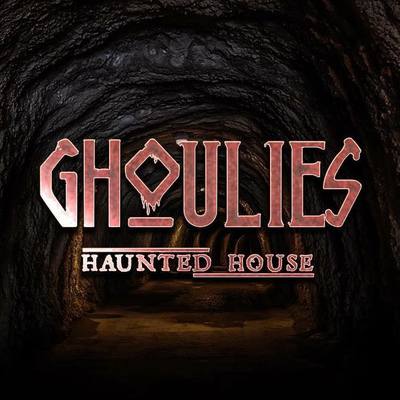 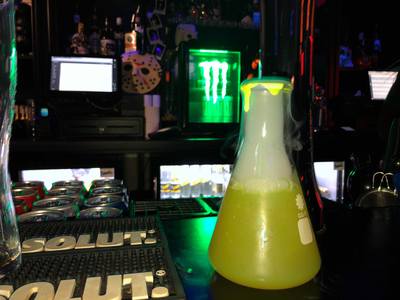 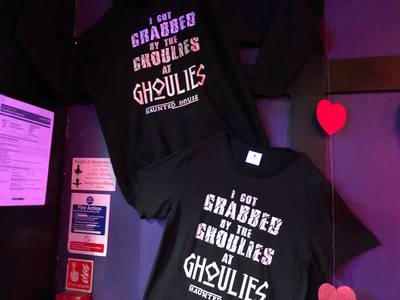 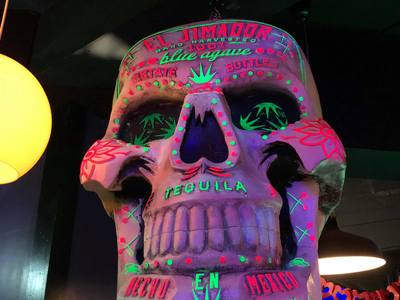 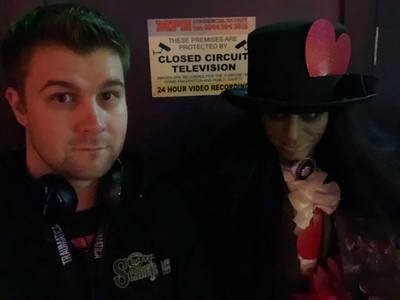 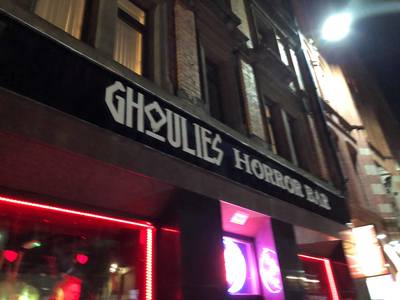 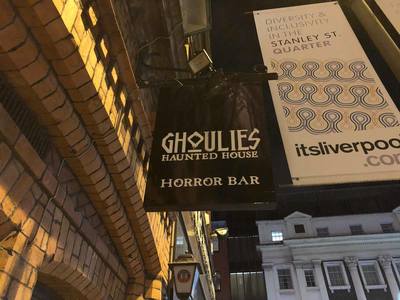 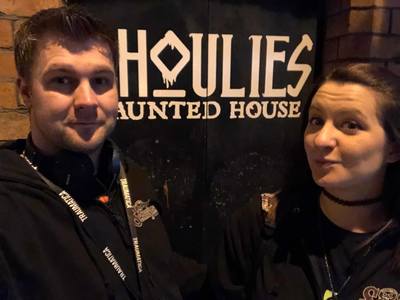 Are you on Santa's naughty list this year? Ghoulie's Haunted House will quickly give you an insight into how you've behaved. Following our Autumn visit here, we very much looked forward to seeing what frights would be in store for us this time round, as we checked into 'Santa's Grot Hole'.

Braced for the abuse that would ensue, we entered the basement once more. A grotesque Elf like creature met us, after we passed through the red door, and he set the scene horrifically. The Elf switched back & forth, from friend to aggressor, which set the tone well. We were tested to see if we had been be good or bad. No surprise - but we failed miserably. He then bashed and pinned us to the wall by a hammer on our throats. The emphasis this time was more on storyline & character, as opposed to a scenario from hell, and it worked awesomely.

Santa himself was next up for us to see at his dinner table. This was a highly abusive & amusing scene. Unfortunately however, once again, we didn't tick the boxes of good little boys, and he set the demons on us. We must try harder to be nice next year!

The overall route was quite different to last time, which had us disorientated & running in circles. Between the pair of us we had conflicting views - our co-visitor found this event scarier than the previous, due to all the childhood references, whereas we preferred the regular show. It just goes to show that each show at Ghoulies manages to tweak certain phobias and instincts and is always changing from one show to the next. We certainly had fun, and would highly recommend it for a Christmas night out. We can't wait to see what their next seasonal event brings.

The 'Santa's Grot Hole' is running until Saturday 23rd December.
​ 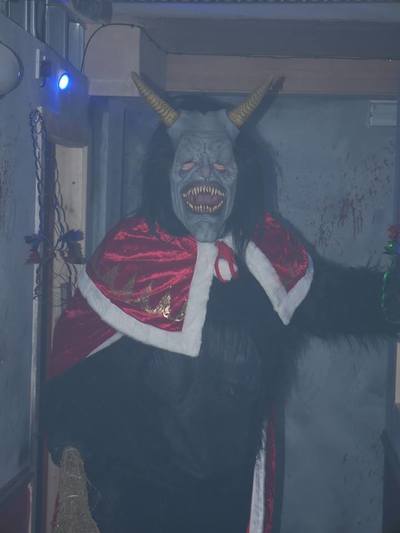 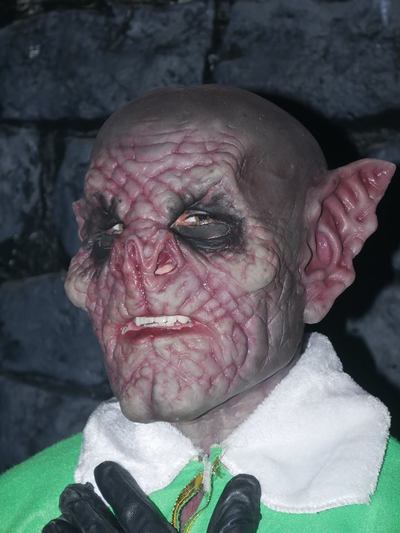 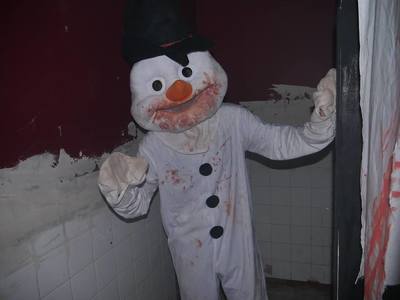 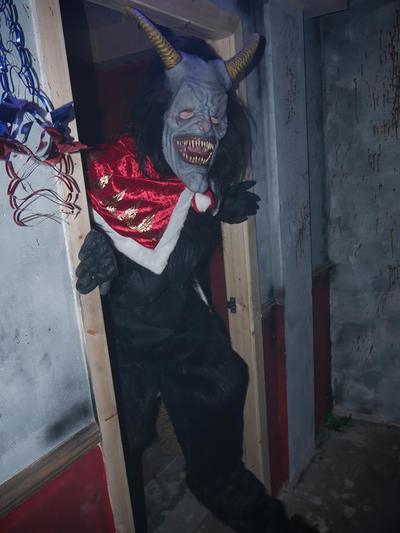 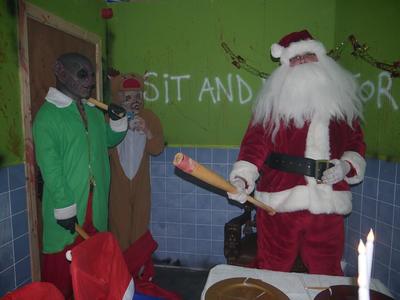 Terrifying
Freakin awesome!! A real must for anyone. GO!!

Set in the medieval part of Liverpool city centre, Ghoulies Haunted House, makes an eerily evil impact amongst the beautiful grade II listed buildings along Dale St. This is the very street that Alois Hitler, the half brother of Adolf Hitler, ran a restaurant. Alois's wife claimed Adolf himself even frequented this area from 1912-13!

So with this in mind, we checked into the 'Ghoulies X' 18+ show, and waited in the Horror bar for our turn of punishment. For extra tension, there was live CCTV footage all around the bar, showing the victims who entered just before you. It works a treat, to get those nerves going, yet does give away a few spoilers.

For the no holds barred 18+ experience, you are warned that you will be physically & psychologically tortured, so no complaints when you definitely are. Naively we entered as a pair, to endure the full treatment. The experience began by walking down stairs into the basement, through a series of underground corridors towards the Red Door.

Once on the other side, we were thrown into a terrifying world, which felt like a cross between 'Chainsaw Massacre' & a day in hell. Physically we were pinned against the walls, bashed with tools, bullied & dragged off into rooms individually. Our comfort zones were completely ignored, and our phobias were tested to the limits.

The costumes, masks & weapons were all excellent. When pinned crippled down in a chair, the quality of one of the character's masks left me in awe. This moment didn't last long, as I was unexpectedly thrown into a claustrophobic box room & tightly wrapped in plastic...!?

Following that, we shall spoil no more for you. This event had a lot of original moments, and the displeasures were an hysterical pleasure to endure. The pneumatic horror props are state of the art, and this scare attraction is here to compete with the best. The experience lasted 15 minutes - the focus on quality over quantity, and is a non stop ride through a nightmare you never even knew existed...

If this all seems a little bit invasive for you, there is the lighter 'Haunted House' experience 7pm-8pm, and a Christmas themed Scare event is presently in development.

Terrifying
Open all year round and a fantastic bars to sooth your nerves before and most definitely after.
Yes