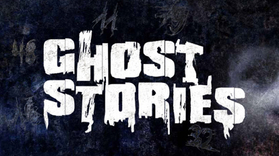 Virtually a year after its Liverpool debut, Ghost Stories is still running to packed audiences in London’s West End. Having read some of the mixed reviews of the show it seemed apparent that critics love it yet many internet forums and home computer reviewers have hated it.

Maybe some of this is due to the extremely clever marketing which does overhype the show as super scary like a modern day horror movie. Or maybe too many people, desensitized by gore and fast paced action, were confused by its timeless storytelling style and slow tension build. Ghost Stories is not some rock and roll horror movie but a creepily terrifying and well constructed piece of theatre that pulls out every trick up its sleeve to leave you scared, bewildered and wanting more.

The show has quite a simple concept – opening as a basic lecture in parapsychology, a learned but ultimately world weary professor stands at the front of the stage to present a talk on ghosts and the unexplained. As the lecture goes on, he introduces some stories of the characters he has spoken to and of the things they claim to have experienced. Each story is cleverly introduced by the start of a dictaphone which carefully segues from recorded voice, to talking head until we are drawn completely into the story and actually see what happened first hand for ourselves.

The stories start off quite basic and normal and at times even humdrum, the long drawn out discussion with a Russian co-worker, a telephone call home to mum or a businessman busy on his Blackberry. These little moments of real life help keep the stories grounded and believable. These are just normal people, living normal lives. Or are they? As you get drawn into the scene, the truth of their experiences and what happens to them seem all that more shocking. At times you can’t actually believe what is happening as you peer at the stage through your fingers – wanting to know more, yet scared to know the truth.

And then the next moment you are laughing. What most people don’t tell you is just how funny the script is in places. Jeremy Dyson is direct from the League of Gentlemen and Andy Nyman has a comedy reputation. Laughter is a great antidote for fear and the show see-saws cleverly backwards and forwards throughout the run. Of course, some of this is nervous laughter as the tension starts to build up to almost unbearable levels.

All the situations are set in very regular and undramatic places, and the sparse stage lighting and minimal sets convey a sense of place and purpose while leaving lots of darkness lurking behind. In fact it’s sometimes difficult to watch the stage as there’s a feeling of just TOO much darkness. It creeps round the edge of the frame and you never quite know what could or might appear from where. But when something does appear, you know it! This is not some talky/implied threat style theatre piece but something full on, in your face and brash.  The audience experience a build up of tension, followed by something so quick and so unexpected that sometimes you are left wondering if you really did see what you think you did.

It’s not just on stage that this show plays all its tricks. Amazingly the actors appeared to be using natural projection without mics – a refreshing effect these days. Even more so impressive when you hear the incredibly detailed aural soundtrack that surrounds you in the theatre. Voices call out, sounds appear and sometimes something as simple as a rustling noise is enough to get people to look around them in fright.

But this play is not just about the effects and the sound. The heart of the show is held together by a talented cast who make both the build up and the release believable and shocking. You find yourself wanting to know more about their lives and what is happening to them. The whole ensemble piece show is expertly held together by Andy Nyman in his believable turn as the chief lecturer. A role that requires an engaging stage presence throughout.

At the end of the show guests are asked not to reveal any of its secrets and like the long running Mousetrap – people seem to be honouring this. Despite having read so much about the play – I was truly surprised throughout and I sat, sort of open mouthed, as the story threads came together and our patience paid off.

As I travelled home that night, I spent a long time replaying the events in my head and thinking of parts of the show – in particular – one striking image haunted my sleep that night. If you’ve seen the show you’ll know what image I’m talking about. It could be made for the show or it could be real. Either way its sends shivers down my spine as I think about it, and for that to happen 3 days later – has to show that Ghost Stories is as memorable as people say.

In summary, I was engrossed in the show from beginning to end. The 80 minutes runtime just flew by and I found myself looking at the watch as the curtain came crashing down for the last time as if in disagreement. In that period, I had laughed, jumped, chewed my nails and yes perhaps I did let out a little scream or two!

But that’s to be expected – after all the show is a masterpiece of fear and fun that is easily the scariest thing I’ve ever seen on the West End stage!


A return to Ghost Stories

We returned to the show about 5 weeks later and wanted to see if knowing the details of the story or any of the twists would ruin our enjoyment. It was completely the opposite and if anything we enjoyed it more the second time. Yes, you know where some of the big scares are coming from but a second viewing allows you to take in the more subtle pointers and clues scattered through the show. Moments that almost seemed out of place origianlly, now fit seamlessly into the whole story that is being told. In fact it's in this second viewing where the art and skill of the writing becomes evident and how what seemed to be random names and events all have a part to play.

So if you havent seen the show at all or fancy going back to see how it's all done, the  box office is currently booking until June 2011 - Book now!