Frightmare at Over Farm

Panic is the parks most intense attraction with some good theming and some impressive distraction scares. A highlight was the skull room with white plastic masks hanging, all under a UV light. It was simple but effective. As the patients started to escape their cages the maze goes in to its final part using many strobes and cages/fencing. Similar to the ending of Alton Towers' scare maze this really was a great effort by them as the strobes make it hard to see how many actors were in there and some of group were genuinely scared. Then a walk down a dark tunnel leading to the exit, with an actor coming out from the strobe maze shouting at you to get out. 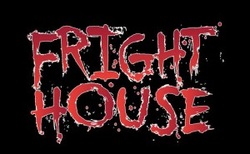 Fright House is a traditional haunted house and starts with a room where there are number of doors with one slightly open with some sound and scream effects coming behind it.  This left us on edge as we didn't want to go any further. Once inside, we walked around several different rooms of the old farm house with most scenes having at least 2 actors waiting to pounce. The kitchen area was a particularly good scene with blood stained walls and pots. Once we ventured "outside" into the graveyard, a suitably grumpy grave digger tried to chase us and and when we didnt move fast enough he used a certain petrol driven tool to ensure we left in a rush! Fright house was fun but not as scary as Panic

The main attraction at Frightmare is the Haunted Hayride and this year it was themed around twisted fairy tales. Due to there only be one trailer we had to wait quite a while to get on even though the event was quiet. The tractor take a drive in the dark fields and there are a number of scenes along the way including little red riding hood and the three bears. As always - some scenes are more impactful than others but we enjoyed the scenes from the comfort of the trailer not realising what was coming next! There's always a reason to get off the trailer at Frightmare and this year a very flirty Prince Charming needed our help to find his Snow White. Once off the trailer, the scares came thick and fast with a mix of theatrical scenes and a maze finale filled with strobes, smoke and lively actors.
The farm is also home to the Zombie Paintball Safari. You board a builders van that has been converted in to a safari truck with paintball guns (5 on each side) which then sets off in to total darkness. The van is fitted with a huge UV light on both sides and when targets appear we are encouraged to shoot them - the paintballs look really effective in the light. It's a clever effect as the light goes on and off between each scene so the drive through the field is often in complete darkness The whole experience last bout 10 minutes and is not included in admission price.
The farm has put many undercover areas around in case of weather, which worked well for the day we went and there are many costume actors walking round providing entertainment in the queue lines. The event also hosts a fair ground with a vintage big wheel and a ghost train. During the day the park also offer experiences for children where they can do the Panic maze but in a less extreme version. This attraction is going to build year after year.
For more details about Frightmare - check out their website