Fort Amherst have been holding a Halloween event for years but it is only recently that the latest team of volunteers have been in charge and the event has seen a massive turn around. What makes this show stand out from other events is that large groups of up to 40 people enter at the same time. Now 40 is a lot for a one group and in theory it shouldn't really work, but the sheer number of actors involved means that the scares come thick and fast. As we have reported in the past - at times their is an air of mass hysteria as the fear and screams feed off of the people around you  Never has a walk through an abandoned fort been so loud and scary!

Fort Amherst itself is a 300 year old Napoleonic fortress cut into the hillside overlooking the River Medway and the town of Chatham. The building is supposedly one of the most haunted locations in Kent and even with the lights on, the place looks like something out of a horror movie. Even some of the rock work looks like a Hollywood special effect as due to strange volcanic activity in the past some of the walls look like congealed brain material.

Once again the tour started in the lower levels and the opening tunnel is a perfect set up for what is about to follow. Impenetrable fog, actors everywhere and the feeling of being trapped underground, had us scared from the start and the tunnel echoed with screams from everyone around us. It's a great introduction to the evening and just a hint of what we will experience once inside the main fort!

From then on in - it was scene after scene, with what can only be described as organised chaos. Each room follows a particular pattern in that there is some set up followed by an attack of creatures. Whether these creatures were coffin dwelling zombies wanting to drag us into their coffins, devilish dolls, killer clowns or evil red necks, they all had one purpose - and that was to terrify us.

Unlike many attractions, actors at Amherst can touch and the element of being manhandled (albeit safely) by this rowdy bunch of creatures is both refreshing and terrifying. Certainly when the nearly 7 foot werewolf tries to pick you up and drag you into the darkness, you know that there's no point fighting and to just go with it! Once again These scenes were easily some of the most terrifying things we have ever experienced and felt so believable. The way the actors managed to get between the group and separate us is incredible and in the atmospheric show lighting you never really knew who or what was standing next to you!


The attraction used different parts of the fort this year and it was refreshing to see some new scenes that we hadn't experienced before. Certainly by the time we got to the Asylum at the top of the hill we were left panting for breath and the "goodnight" finale was just hysterically bonkers and probably one of the most intense attack scenes of the night!


All in, Fort Amherst Halloween Horrors is like nothing else in the UK. It truly is a terrifying experience and would test even the most seasoned scare enthusiast. The crowds were all loving this event and once again it has been one of the highlights of our Halloween itinerary. If you want to experience something truly different - then you need to visit Fort Amherst at Halloween! 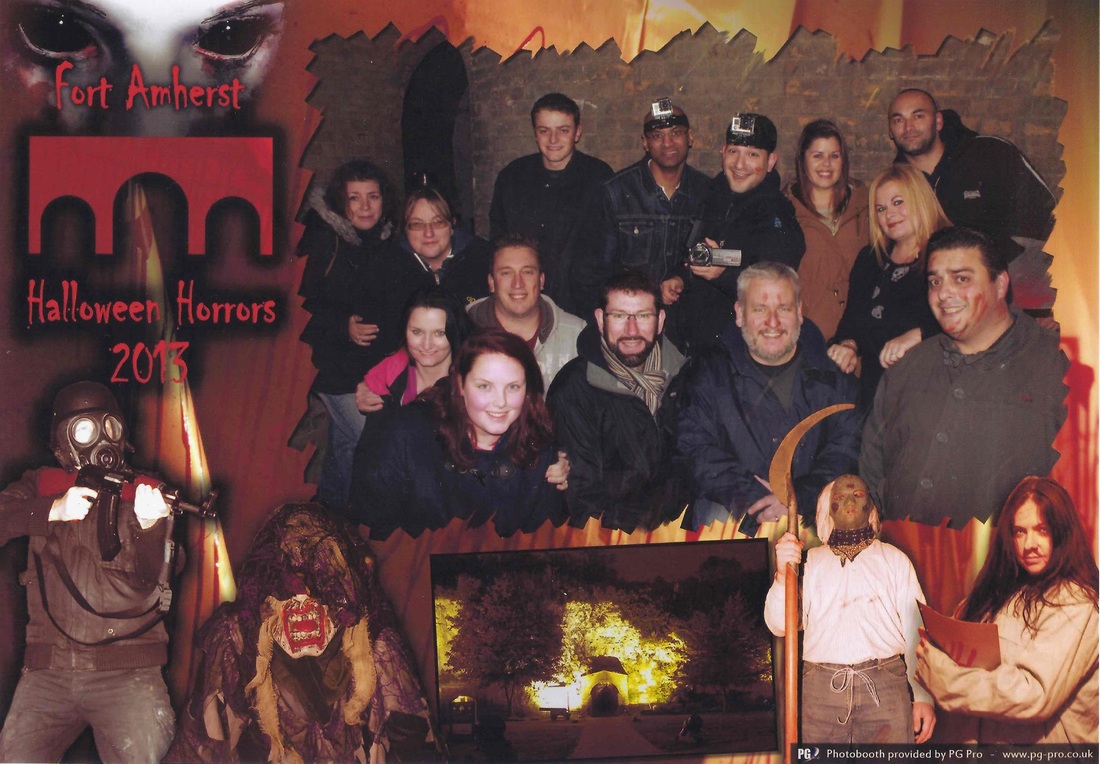 The ScareTOUR group just before entering
For more information about Fort Amherst - www.fortamherst.com/

Very scary - I came to Fort Amherst about 12 years ago for the Halloween Horrors and it was quite scary back then. Returned in 2013 and my god it was 100 times scarier. My heart was pumping, eyes bulging out of my head trying to see & nervous of what was to come. The scenes & sets were fantastic. Very much like something out of a horror movie. Better still, the actors were.... Very real like. I was freaked out by their professionalism. I even tried to make one of the actors smile back at me because I was genuinely nervous. She didn't even twitch her lip. I felt quite nervous and had to bury my head in my partners shoulder. I had my ankles touched, fingers in my hair, zombies putting me & my friends in coffins. I was shoved and segregated from the group which I must say caused me a little panic, had 3 asylum patients trying to eat me for dinner. Chased by a maniac with a chainsaw. Ohhhh when we finally reached the outside world there was a feeling of relief. Looking around, everyone was huffing & puffing and generally looking a bit dishevelled. My group was gutted it had ended. This event was fun but very scary. I would recommend it to anyone who loves zombies and horror films. Fantastic and well worth the money. We will be talking about it for weeks. We will be returning next year with more friends to scare. Good work to the team & actors at Fort Amherst, Chatham. - Jockess