There is a popular expression - "if it ain't broke, don't fix it" and this is so true with Farmageddon 2019. The four main attractions all returned, and once again delivered a powerhouse of scares and fun.

Everything we have come to expect from Faramggedon was there, including detailed sets, impressive scares, dancing girls and whole lot of rock and roll. From beginning to end the whole event is an assault on the senses - in fact it's like the cross between a heavy metal rock video and a horror movie!

We were slightly surprised that The Foundry extension to The Beast of Terror has been removed for this year, but as we have said in previous reviews, this section never quite matched the attention to detail and sets of the rest of the maze, so we actually think the omission works in the maze's favour.

Although we have lost this section, the event has extended the main entrance and hub and has even more of a rock festival vibe, with live acts on the stage and a new licensed bar.

What we really noticed this year, was that the scares and acting talent seemed even stronger than before. Every attraction was filled with fast and aggressive scares that had us jumping and screaming in equal measures. All of the actors were throwing their all into their performances and the scares were thick and fast throughout!

Outside the mazes, the event once again has an incredible troupe of roaming actors, which were all so entertaining through the night. No where was safe and they entertained and scared relentlessly.

We always have a great time at Faramaggedon and this year was definitely no exception. It really is a great event of shock and roll excess, and we are proud to number ourselves as some of their groupies!

We have been visiting Farmaggedon for years now - in fact this is their 12th year of operation, and we have seen a number of big changes along the way. This year sees a massive conversion and extension to Terror on the Farm, to become what is being billed as the largest indoor scare attraction in the UK.

So we arrived and passed through the entrance. Hearteningly it has the same evil feel and as we started to explore, horrific creatures took no time to find our party and pounce on us whilst we tried to get our bearings. Other monsters were sending punters running with fear to the exit, and reducing them to tears within minutes. The make up on these characters really do deserve a standing ovation.

We headed straight to The Beast of Terror which is now twice as long - they have added an extra 1800 sq feet for our misery! Of course the queueline hosts the incredible Farmaggedon dancers, which remains the best scare attraction facade in the UK. It's loud and sexy and starts the night off in style. It's quite surprising then, that the rest of the attraction is quite quiet in comparison. The first half is an eclectic mix of ghoulish scenes based within a mansion with a mind of its own. The sets are excellent and the rooms we entered are executed well, although the themes of each room don't always keep up with the through line of the story (especially within the Foundry section.) However once we entered the second half of the walk through, things really started to gel together and we were confronted with the conjuring of the supernatural, cult sacrifices and12 ft animatronic beasts. These all help immerse you into a story that throws you forward in a fabulously gratuitous manor, which ends in an awesome climax. The extra length added to the attraction just made it seem to go on forever (in a good way). We didn't time how long we were in there but it seemed to last forever!

Doing the attractions in order, we then headed to Zombie Outlaw. Which remains as fun as ever. Following a military briefing, we boarded a two level wagon which holds 20 participants armed with automatic air guns. Circling the perimeter of a farming village, the attraction involved blasting the hell out swarms of zombies, who were intent on ripping us from the wagon. Although not scary - it really is a fun event  and is the only zombie paintball event, set up in this way.

The secret outdoor maze that ensued, was designed to get us back into the main area of Farmaggedon. Several soldiers had found themselves lost in this area, tormented with the memories and flashbacks of this war. The strobing green lights against the slatted walls of the maze, made for a total confusing experience. A nice surprise addition to the line up.

Next up was Contagion the 3D maze which has been repainted for 2018. The provided glasses make the huge ultraviolet 3D paintings of alien beasts just leap off the wall. The whole thing was a bizarre mix of weird and insane rooms, hosted by freaks, clowns & Mexican day of the dead characters. On route, there was a good spread of drop box scares, air jets, plus a manic carnival sound track. The originality of Contagion is a very welcome contract to the darkness of the other attractions and really adds to the overall sensory experience at Farmaggedon.

Our final outing was at 'The Meat Locker', and it certainly was a grande finale. Imagine an underground world where cannibalistic psychopaths ruled, and now we naively stepped into it and tried to escape with our limbs still attached to our bodies. Well that pretty much sums up the horrific designs behind this outing. The set is stunningly gruesome, and the story throughout unfolds seamlessly. The sick and twisted ideas, continue to surprise from room to room, and had several of our group cowering in tears on the floor.It didn't help when we got split from some of the group who got locked in a cage so we had to finish the maze in just a group of 3.

Farmaggedon is really back with a bang and just gets better each year. The atmosphere around the area - including Freak Street which was introduced in 2017, really give the whole event a scary, rock and roll festival vibe. As the first Halloween event to open each year it always sets impossible targets for all other events to follow. If you have never been then make sure 2018 is the year you go! 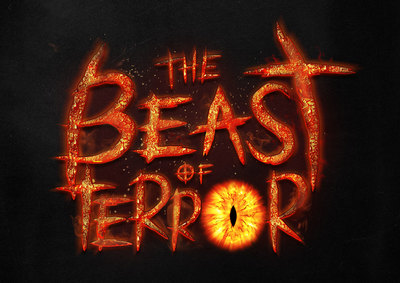 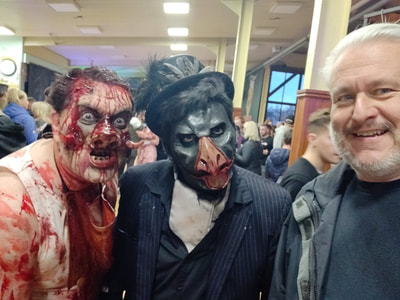 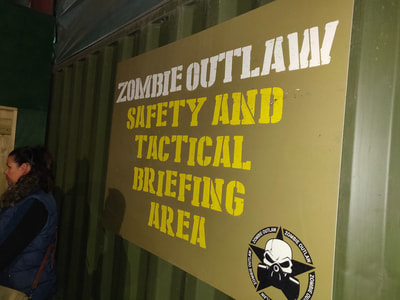 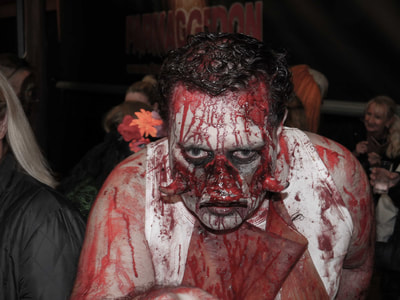 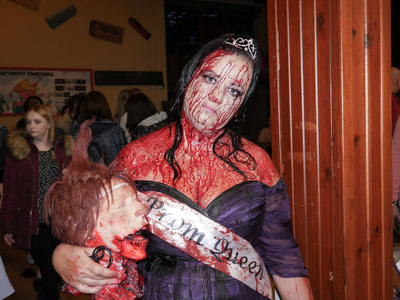 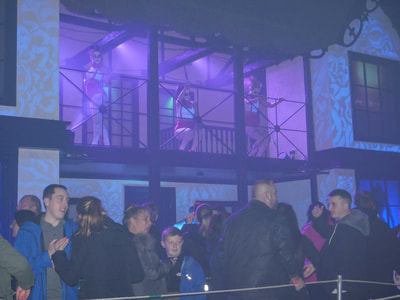 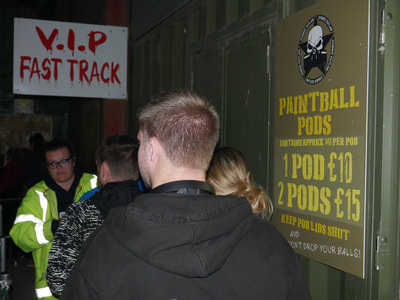 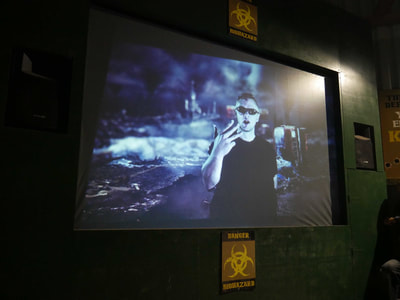 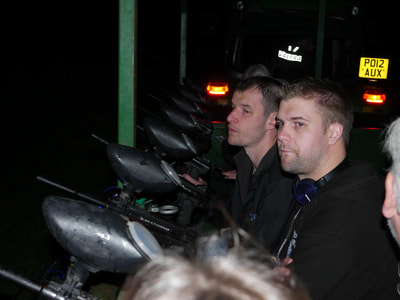 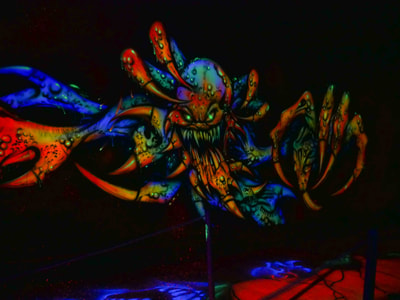 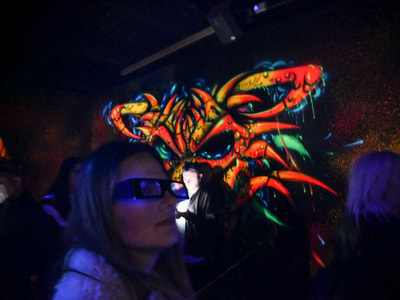 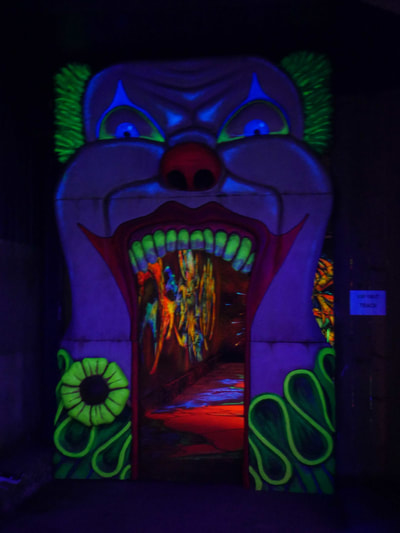 The Halloween season kicks off yet again with Farmaggedon returning for a mid September press night. The night was wet, cold and dark, the perfect start to our scare season. This year saw Contagion, Meat Locker and Terror on the Farm, featuring the foundry all making a return. The evening began with a guests being terrorised in the food hall by an array of roaming actors, including a 10 foot clown creature and chainsaw wielding manic! It was a great way to start our evening.

Contagion
Contagion is the event's 3D attraction and boasts bright UV coloured walls surrounding you with 360 degrees of 3D terror. This attraction uses some of the best 3D techniques to get a great scare with actors using the same paint covered costumes as the walls around them, meaning they can truly jump out from anywhere to get their scare! Although we loved our visit to Contagion, our 3D glasses were slightly on the worn side so when we jumped in fear, our glasses would go flying! Contagion still continues however to have some great jumpy scenes within the twisted UV fun house.

Meat Locker
Meat locker returns mostly unchanged, however it still stands up as a quality, detailed attraction. The maze continues to pack a punch with some fantastic special effect make-up on its lively actors. Although a few areas of the maze felt like it needed more actors, the performers who were scaring us, got us good! The chainsaw finale of Meat locker is always visually impressive with the fantastic flooded factory scene where you are walking on pathways above the water.

Zombie Outlaw Paintball.
An upcharge attraction at Farmaggedon is Zombie Outlaw paintball. This fun attraction takes the group on a double decker open top trailer to attack the zombies swarming Farmaggedon's land. After a brief video and safety presentation, it’s time to bear arms and take on the zombies. The trailer is taken through the fields where we can let rip and shoot the zombies emerging from the bright UV sets. Not the scariest attraction at the farm but fun none the less.

Farmaggedon is home to some greatly detailed, long and lively attractions. The whole event is bought together with a fantastically themed indoor central hub and the brand new ‘Freak Street’. Freak street is a new walk way home to rock music, sexy dancers and even a demon DJ. The central hub and freak street really add to the overall atmosphere of the scare park. We can’t wait for our next visit. 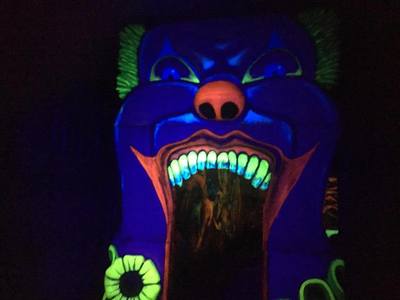 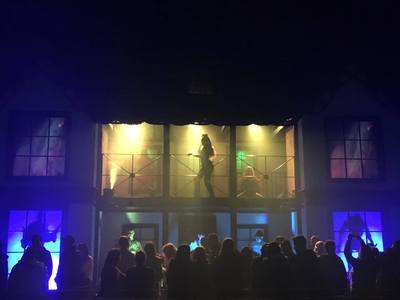 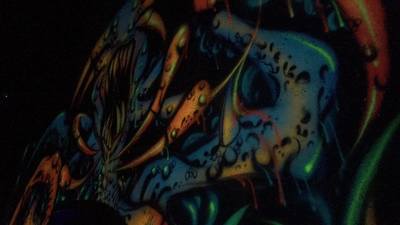 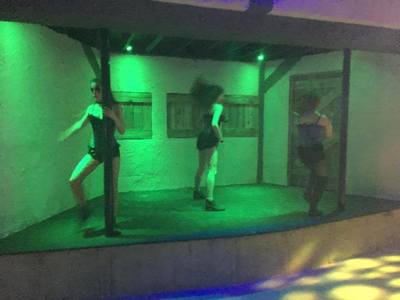 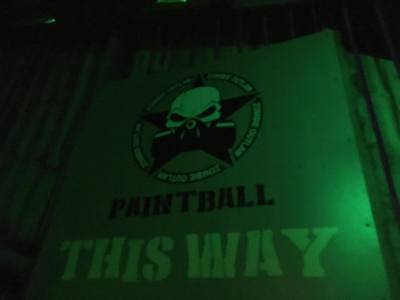 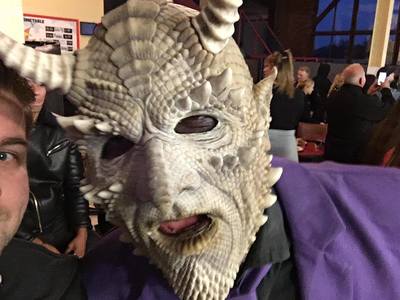 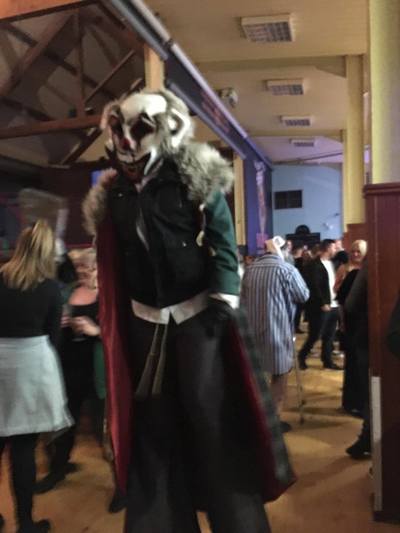 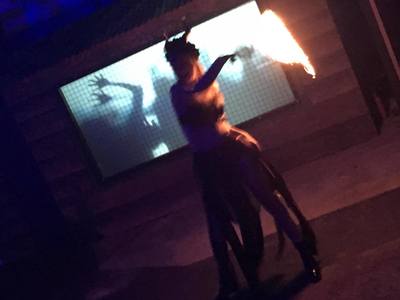