Farmaggedon has been scaring Lancashire residents for years and to this date remains one of the most intense Halloween events in the UK. With it's dancing girls, detailed sets and crazy actors - the production values are bigger than most farm based scare events and it's no wonder that the event sells out every year.

On entering the park you have a choice of three areas to visit which can be done in any order. Around the park there are a number of staff members ready to assist you if you're not sure where to go next, and refreshment areas where you can call your nerves between mazes.

The first maze we experienced was Terror on the Farm and as soon as we entered the waiting pens it was obvious that the whole show was going to be something extra special. The atmosphere is built up by loud metal music and beautiful yet freaky dancing girls putting on a creepy display while you want to enter. Once inside you are left to negotiate a labyrinth of crypts and caves with horror waiting around every corner. The costumes were really detailed and the actors were extremely physical throughout, never breaking character and keeping us on our toes for the entire time. This maze has by far the biggest and best production values and was a fantastic way for us to start the night.

Next we risked Insanity, a cross between a WWII bunker and an insane asylum and the set is as intricate and fantastic as the last maze. From the disorientation of the strobe lights and the fear of what could be lurking around every corner, this maze will left our hearts pumping as we were chased, cornered, and terrified by crazy inmates armed with chainsaws - hurtling after us as we ran for our lives! This maze is a complete attack on the senses and is great for pure adrenaline fuelled fear.

Finally we plucked up the courage to enter the final maze, Psychosis. One major word of warning though if you are considering entering this maze it is full of clowns! We really enjoyed this maze due to the incredible set decoration and the colourful characters within.

In between mazes there are a number of wandering actors happy to keep you on your toes and pose for pictures if you dare to get that close. From superior sets, talented actors, phenomenal costumes and the fantastic atmosphere, Farmaggedon is an impressive attack on the senses and is probably the nearest we have in the UK to a US style haunted house. Of course, the problem with the popularity and the sell out nature of the event is that queues to enter each maze can be very long at times so if you can afford to pay extra then we would recommend you take advantage of the fast track opportunity. 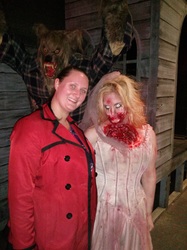 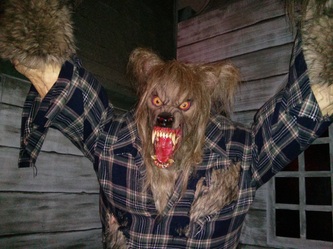 For more details and booking information - visit their website

Terrifying
I have been to numerous haunt attractions but this is by far the best.
OMG. I was terrified !!!! Everything about it was professional, the actors are amazing and the make up was outstanding!!!!
I won't be going to any others again, but this will be a yearly ritual. - Gill

I have been going to scare attractions for a number of years now and I found this years farmageddon to have been the best yet. I was sceptical at first as few years earlier I attended and was not fussed but this year I was blown away by the sheer quality of production and overall delivery. - P Growney

Farmaggedon was the most horrifyingly thrilling experience I have ever had, it's like stepping foot into the films I used to watch many years ago as a child, however in modern twists and turns which kept me and my family looking behind us in case we were attacked from the chasing ghouls. The interactivity of not only the actors but the houses themselves is second to none! Well done cast and crew of Farmaggedon and you should be very proud of your work - Mark