​It’s been several years since Evil Rising last operated, and we were beginning to think we had lost it to the great scare attraction scrap heap in the sky. Then during the summer, they reactivated their social media accounts and started to tease a return. Having experienced all previous versions of the show, we were excited to see what this new version would bring.

First off we need to highlight that the event has always been a changeable feast. When it first opened it was a city wide chase game in the style of the 2.8 Hours Later. Starting with some theatrical scares in a warehouse, we were soon running around the town with zombies in hot pursuit behind us. Over the years the team were able to source exciting new venues - including the incredible Drakelow Tunnels, and different stories and themes were added.

This new version of the event has ditched some of the grandeur and expanse of the original shows, and gone for a short sharp and intense attraction mixing a number of different stories and styles. We completed the course in about half an hour, but our journey was pretty action packed from start to finish

The event kicked off in the grounds of a pub, and we started to wonder how they would fit all the scares in, until our path led us to a waiting mini bus. Bundled in to the bus and hooded by a crazed assailant in a clown mask we soon found ourselves racing at breakneck speeds to a different area where some true horrors awaited. These included several maze sections, some great theatrical elements and a lot of jump scares. The route around the event field taking on all sorts of themes and characters, culminating in a mad dash in the darkness to get back on the mini bus to safety.

Unlike other attractions, Evil Rising was very hands on. If we weren’t moving quickly enough we were pushed and jostled by the cast, and at one point one of the team ended up in a coffin while we danced around them singing nursery rhymes! It was this random nature of the show that kept us guessing, and made the show so refreshing and different.

All in, we had a fun time at this year’s version of the event, but did sort of miss the sprawling nature of the original versions. Maybe after being away for several years, the team were just testing the waters as to whether people still wanted this product, and will come back bigger next year? On the strength of what they pulled off on our visit, we hope they decide to keep coming back bigger and better. After all - the future is Evil. And that Evil is Rising! 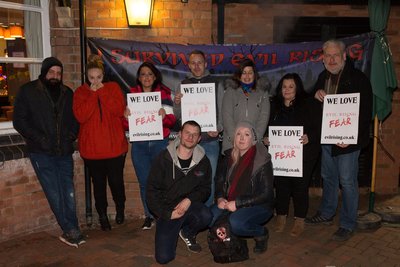 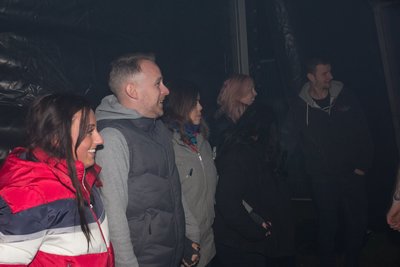 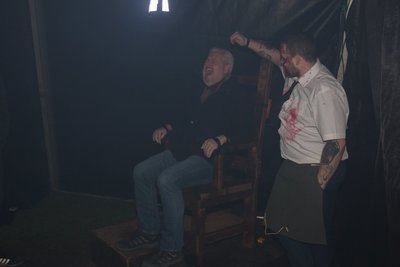 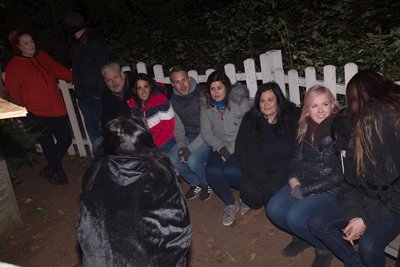 The More Is More team are back with their 6th Incarnation of Evil Rising, and after enjoying every event the team has produced so far, we couldn’t wait to run from the Evil Spirits within Worcester once again.

With high expectations, we laced up our running boots ready for an hour full of scares, dares and lots of cardio! This years Evil Rising raised the bar by not only throwing the evil spirits for you to escape from but also put a cash prize up for grabs to anyone who could successfully complete all the clues.

After a quick briefing on the event we came to realise that we were on the hunt for Carmella Vella’s gold (£1313 prize money in fact). We were sent on our way and invited into an abandoned container, where we were greeted by a teenage gang ready to summon the evil spirit of Carmella Vella. This scene was executed to perfection and with just the right amount of jocular behaviour you would expect from youthful characters, we were entered into a false sense of security. Then all of a sudden we were shocked to realise that the séance worked and that one teenager had indeed become, Possessed! This scene was not only a very strong beginning for this event, it has become one of our favourite scenes throughout the entire Evil Rising franchise, coming a close second to the infamous warehouse scene in the first show!

As with all Evil Rising events there was a lot of running, but these short bursts came at perfect times to heighten the fear factor in between games. Evil Rising have always used quality actors and scripts for its very imaginative scenes, however this year was slightly different and introduced games into the mix. In between chases we would come across gruesome and unnerving tasks where we would search for keys with each key leading us closer to the gold. The games heightened the panic factor and gave the event a deeper sense of purpose.

The final scene bought us to the end of our search for Carmella's gold. Carmella was summoned as we tried to open her chest of treasure. The team had retrieved 2 keys throughout our evening and the panic and fear factors were heightened as we only had a short space of time to try our keys before we succumbed to the evil spirit of Carmella Vella. The scene had a perfect mix of game play along with actor led performance to end the event with an impressive finale. Sadly we didn't win - this time!

Evil Rising – Possessed was another strong event from the More is More team. We do feel that maybe more actor led scenes were needed like previous Evil Rising events, however the games more than made up for it. That being said the team still delivered a great range of actor led scenarios that kept us running! One thing we did notice however was the lack of keys to find during our games. Certain games had no keys in sight after numerous attempts at retrieving them. It came apparent after speaking to the More is More team that the group before us had managed to retrieve 6 keys, leaving less for us. With a few more keys planted by actors in between groups the event could be one of More is Mores strongest to date.

We chose to visit Evil Rising:Possessed because previous reviews told us that this was right up our Halloween loving, adventure seeking street and on the whole we weren’t disappointed. (Spoilers contained!)

Survivor’s Pack - In advance of the event we were sent a Survivor’s Pack full of handy hints and tips and most importantly the top secret location for Evil Rising: Possessed. This was a great introduction to what we hoped would be a slick, professional and fun evening.

The location. Great – out in the countryside very little artificial light, lots of places for cast to hide, very creepy indeed. There are numerous areas to this event but the biggest is a field of, well, mud – some if it hard some of it very soggy and soft (don’t wear your best trainers).

The opening scene and the surprise ride - The actors were age appropriate and generated atmosphere whilst relating the story. In fact all the actors did a great job when in character; they were focused, projected well and knew the difference between in your face scares and invading personal space awkwardness. The zombies. Don’t for a minute assume that once you’ve taken a few steps away they will retreat – they give chase (!) which only adds to the excitement.

Not just a scare maze - Yeah, they’re great for a quick scare but this was intense from the beginning to the end. You get to take some control here too, you’re not just herded through a range of corridors, you make choices. You can run straight through it, dodge the cast and be done in ten minutes. You can walk it all and miss the action and the adrenaline. What we did felt like interval training (my thighs definitely feel it today) but it was thrilling and fun. Again different to a maze in Evil Rising there are certain items you have to find, the more you find the better chance you have at winning the £1313 prize money. Be prepared to search in some stinky, slimy places but do it quickly!

The boy zombie - Was he crying? Was he screaming? Was he laughing? Probably all three but he was seriously scary. In a pitch black field with only his voice to head for he was a terrifying highlight.

The final scene - Could have been taken straight from a horror movie. The Latin chanting, the screaming, the running away, the running back, the blood, the count down of time! A high impact ending that was well acted and had us running as fast as we could even after 40 minutes!

Thanks to the warnings from More is More we left in plenty of time to avoid Worcester’s traffic and actually arrived early – our time slot was 7pm and we arrived at 6:20pm. Knowing we were a bit early we sat in the car for a while – sadly, the cast were out and about in full costume and full view – smoking and sharing fish and chips off a car roof. When they went into the tent (I assume for a briefing) we made our way over to someone we thought might direct us – it was now 6:35pm and we were told in the Survivor’s Pack that you have to arrive ‘no later than 20 mins before your booked slot’. A nice lady awkwardly told us there was nowhere to put us … so off we went back to the car. I was a bit off put by this lack of professionalism especially as this is an event that is in its 4th year. Why isn’t there a separate area for the cast out of sight from any paying guests? (If I went to a regular theatrical event I’d be a bit peeved if the cast were swanning about the foyer sharing a redbull.) The cast didn’t disperse until 6:50pm by which time more people had arrived, been returned to their cars and treated to the cast parade.

The event finally began at 7:10pm with a talk from a member of staff – I think it was supposed to be a safety briefing slash introduction … I’m still not sure what it was. Perhaps it needed scripting but the free form/chatty tone didn’t really set the atmosphere or give much information.

These points could be easily fixed and give a much better initial impression to guests.

A good event with a committed cast. It was lots of fun (and exercise) and at moments completely immersive. Despite the dubious beginning I would hope this was an anomaly and certainly recommend this event to others. Would we go again – yes and we look forward to next year.

Expected to be following a story but instead found myself running constantly and didn't get to see much of what was going on. Although at first it was quite scary i soon became bored of the same characters (zombies). Would have liked to have seen mad axe men and scary psychos lol. Maybe next year i will enquire about being part of the scare team as acting out the parts is probably more up my street.