Loosely based around the Stephen King novel of the same name, we started this escape room locked in a seemingly helpless scenario and desperate to escape. We elected to start with no clues, but in true ScareTOUR style, we had quickly turned the room upside down and proceeded to race through the puzzles. Unlike some rooms, the puzzles in Misery are completely linear and this is where we had our first big fail.

​We powered through some puzzles then got really stuck what to do. In desperation we turned to the clue system, which unfortunately mentioned a prop that wasn't even in the room! Had we missed something? Were we solving clues out of order? No - it turned out that prop had been damaged beforehand and we had the only clue system that hadn't been updated to reflect this. It was an annoying mistake that genuinely lost us nearly 10 minutes. As the time ticked by towards the end we were surprised that we still managed to escape with such a big time penalty.

Apart from this issue - we had a great time in the room with some of the more fiendish puzzles we have encountered before. Without giving anything away sometimes a puzzle has to be solved once to get 1 combination or letters or words that then needed to be translated again. We just kept trying everything we could until we worked out what was needed, but we can imagine some newbies struggling with the double puzzle element.

The sets and theming were spot on, with some great detailed touches to create an immersive and exciting experience. Although there were no obvious scare elements to this room, the theme and some of the later props are probably not for the easily shocked!

All in, we escaped with a few minutes spare and only using 2 of the available on screen clues. The staff afterwards said it was one of their hardest rooms, so we were pleased we managed to get out! 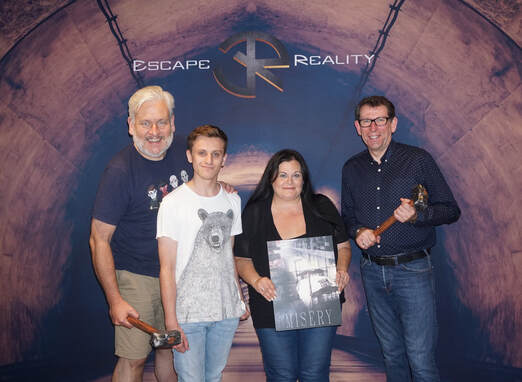 After a few minutes to recover, we plunged straight into our next experience - Enigmista, themed around a serial killers lair.

Upon entering we were chained up in the darkly atmospheric bathroom and left to try and free ourselves from the padlocks and from the room in general. As before the puzzles were all linear, with each subsequent puzzle signposted upon completion of the one before. Maybe because we had just finished Misery, and a few of the puzzles were kind of similar in style, but we tore through this room solving puzzle after puzzle and revealing more of the mystery. What we liked is that there were only a few padlocks throughout the room and instead, electronic keypads controlled maglocks to open doors or hidden compartments.We also saw a few more of the "double puzzle" syndrome we saw in Misery, which could have stumped some people but we were determined to get out in better time.

The atmosphere around the whole experience was much darker in tone than Misery and although there were no planned jump scares, half of the team screamed when we opened a door that knocked a suspended arm towards our faces! Also because of the darker nature of the experience, it felt more threatening to be in the rooms, which we think definitely drove our desire to escape quickly. So quickly in fact that we escaped in just over 29 minutes - probably one of the quickest successes we have ever had!


Comparing the two mazes afterwards, we definitely had more fun in Enigmista. It's easy to say thats because we beat it so quickly compared to Misery, but it was more to do with the experience being more immersive and the puszzles being fun as opposed to really brain taxing. Either way - both rooms were brilliant and we would love to go back and try out some of their non horror themes! 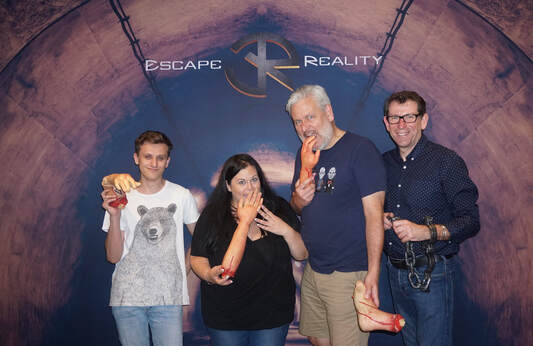