Until now, we had only experienced each of the Darkfield attractions in separate places, so it was exciting to see all three shipping containers sitting next to each other in the middle of Canary Wharf. This mini festival of darkness and sound is in London for just a week, so we couldn't resist going along, to experience them all together.

By now you will know that each show features incredibly detailed sound, delivered to pinpoint accuracy around the room, and (most importantly sometimes) right in your ear! Each story works on a slow and gradual building until the tension is cranked to incredible levels, all being released with sudden and shocking effects, that leave you questioning what you just experienced.

Of the three, Seance seems the most simplistic as the tricks are all aural ones, but it really holds its own against the other two more tricksier shows. Flight probably has the most detailed interior set and "mechanism" of the three (something we were totally not expecting from the static looking set) and Coma piles multiple levels of effects such as sound, smell, taste etc.

In each one - the story telling is a suspenseful masterclass that leaves you straining your eyes into the darkness trying to decipher if what you are feeling and hearing is real. Even after doing three shows in a row, we were still taken away, just how disconcerting but believable the sound field is!

With each show coming in around 25 mins to 30 mins and with short intervals between, we were able to go from show to show to show, and you could easily fit all three in in a couple of hours for just £20. The shows are definitely great value, and if you get the chance to do all of them we would definitely recommend it.

All of our group had different favourites between the three attractions, so it really does come down to personal taste and audience perception.  We all agreed that the shows create an incredible experience, and it's rare that they are all together in one location. So if you want something completely unique and impressive, we can't recommend Darkfield enough...

I have yet to have the pleasure of enduring a Darkfield experience, with my only knowledge of the previous experience (Séance and Flight) being that it is bi-neural audio based. With knowing only this I wasn’t too sure what to expect, a spooky “virtual haircut” like back when I used to put a blanket over my friends head and make them listen to something on my phone. The short version is, yes, it is exactly that. But to a maxed-out level of immersion.

Darkfield use noise cancelling headphones and the most perfect bi-neural audio ive ever heard to throw your mind into a world that you know does not exist but can’t help but question your sanity while experiencing this. COMA took the idea of a group dream/coma delivered completely in the mind with a clever and thought provoking look at consciousness. Laying down in triple bunk beds in the claustrophobic shipping container, we all took a pill that we were ensured had nothing in it but will still work, after chewing this cardboard like pill, and trying not to spit it out. We all were spoken to by a nameless doctor who roamed the centre walkway sipping away at his coffee. The doctor seemed very harmless and this was the general theme, harmless… at no point did I feel particularly threatened during COMA and other than one or two small moments, was I particularly scared. This however did not take way from how much I enjoyed the experience. COMA was clever, interesting, however not scary. This didn’t seem to be the direction they wanted to take COMA though, they seemed to want to concentrate on the collective experience of a dream like state over an all-out scary for scares sake experience.

I don’t want to give too much away to those who wish to experience this in the future so stop reading now if you wish to know less about the experience as a whole… A coffee machine that was at the entrance of the hot enclosed shipping container, on a hot day 30 minutes in a metal box isn’t not a comfortable experience at all but you do forget about all of that when being spoken to directly by the doctor or nurse checking up on you. After climbing to a top bunk, I noticed a pill on a spoon next to my bunk and a metal hatch to my right that I feared of its uses. After putting on the headphones we were instructed to take the pill (or not) the doctor was adamant it was just a placebo and had nothing in it. Which I did enjoy the psychological aspect of letting people know it wasn’t a real pill. I always see the use of pills as if they will physically affect you (when you know they won’t) so to be told “they will work but have nothing in them” was an interesting way to deliver this effect. The doctor counted down from ten until the lights slowly fade away to black they faded so slowly I did genuinely think it was my eyesight and had to focus on the light to realise it was the light dimming and not my eyes closing this worked very well, the doctor who was speaking through a speaker system asked us to imagine him in the room, and along with our imagination he did slowly exist in the space with us. Walking up and down and getting a coffee from the machine I later realised was out of order.

Which was a significant point of COMA creating the space in your head doesn’t always mean the exact details are the same. How did the doctor get his coffee if the machine didn’t work? Our imagination let him. He asked us “are we all still here?” I heard everyone else reply yes… I replied “YES!”. This made me laugh as I suddenly remembered that nobody said yes, it was just the audio. I felt so immersed into this fake reality that I started replying just because my brain was tricked into believing that everyone else was replying. This was the peak point of the experience for me. Knowing I was so susceptible to the mind tricks darkfield were playing on me. they started calling out our names and asking if we had taken the pill, I knew they didn’t know my name, but I was terrified that it was real and they would eventually get to me and say my name, it all felt so real. The hatch to my right would open from time to time and a fly would fly out and buzz around my head, I think this was the COMA in physical form as if the one or two lone flies were the first signs of us slipping into a COMA. This effect was used to deliver a pretty good scare, that actually made me jump!

This was the only “jump scare” in the experience, and yes, I did expect more. I did WANT more. But I didn’t leave disappointed. If big effect didn’t happen, I wouldn’t have felt any less impressed with the experience but this was a nice way to wrap up the experience, but it felt like just that.

​Overall the experience is highly recommended as long as you don’t go in expecting all scares and are willing to really get involved and throw yourself into the immersion of COMA. I'm really excited to see what the future of this technology is, I really do believe it has a lot of room to grow, and Darkfield will be at the head of that growth. 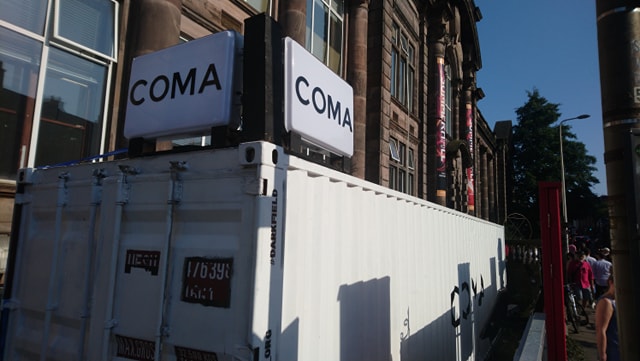 ​Seance at the Vaults Festival 2019

It's been a couple of years since we last experienced Seance in its original state. Over several Halloweens, the show has played out at Warwick Castle as part of their Haunted Castle event, and the setting inside a genuinely creepy looking library has really added to the experience. So how would it feel to going back to a basic packing container?

Surprisingly - it actually makes very little difference. Once the lights go out and the multi directional sounds starts, you are totally carried away to the world that Darkfield have created. And that is the strength of Seance - the casual build up of the story and sounds, creates a totally immersive experience, that will have even the most skeptical of visitors  believing they are witnessing something paranormal.

To say much more would reveal too many of the secrets, but if you haven't experienced Seance yet, then we highly recommend you do soon. Trust us - you won't be disappointed!
​

The Seance is a unique audio experience by Glen Neath and David Rosenberg, where guests are invited to take their seats in a darkened room and partake in a theatrical seance experience. Once seated we are asked to ensure that all sources of light are switched off and to place the supplied headphones over our ears.

What follows next is a totally believeable experience that genuinely had us questioning what was happening around us, especially as the opening is so innocuous and normal, as the leader of the seance quietly chats to the people around you to settle their nerves etc. For a lot of the opening part of the show, we truly felt that there was a live actor in the room (basically impossible with the tiny space we were squeezed into)

Of course - like all good theatrical seances, proceedings start to get a little darker, and soon we arent the only people in the room and the tension is ramped up to almost unbearable levels! By the time the performance is over and the door is opened to let a little bit of light in, everyone looks stunned and startled by what they had just experienced.

The multi - directional soundscape used by this production is easily the most impressive we have experienced. It never sounds like the voices and sounds are coming from speakers and some of the whispers in our ears, were so realistic that they were frightening. Adding to this is the persistent unnerving bass rumble, and the pitch darkness and this has to be the most immersive and genuinely terrifying productions we have ever visited.
​
The Seance is now running until Saturday October 29th at the Birmingham Repertory Theater 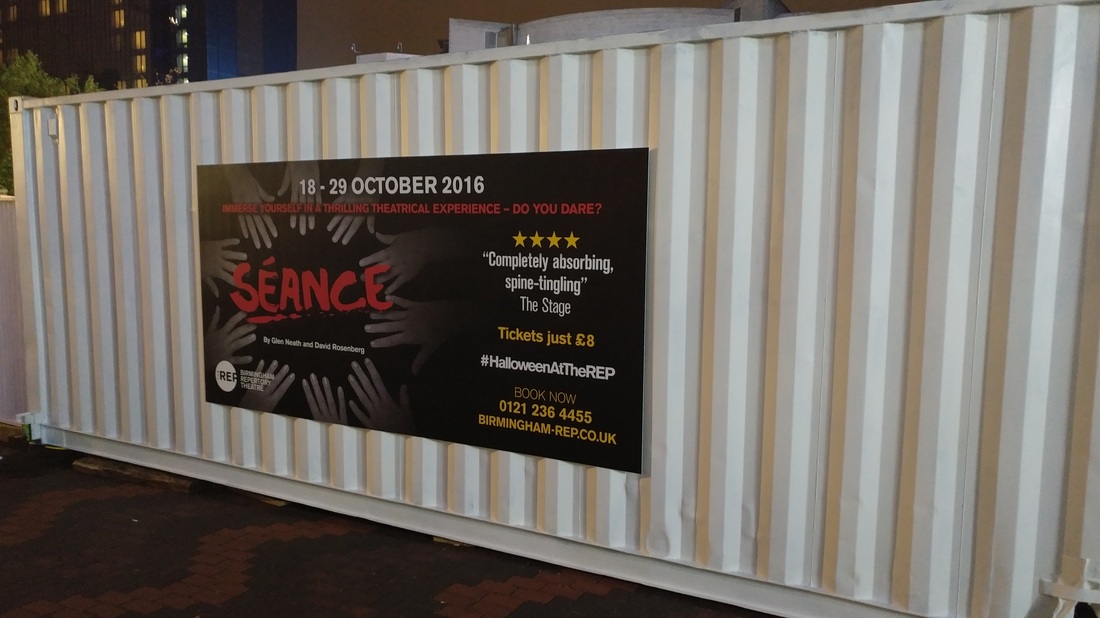