You know those days when you just want to go and enjoy some light-hearted theatre about a nice, suburban couple who have the perfect life and, also, the desire to kill harmless animals? No? Just me then. In ‘Chutney’ showing at The Bunker Theatre, Gregg and Claire feature as a power couple. Well-to-do and up-and-coming. They’ve got the house. The car. The careers. They’re living out their parents’ dreams in blissful suburbia. They also have an insatiable desire to murder animals. Their story is told through a sharp, witty two-hander with introduction and narration from a singing fish nailed to the kitchen wall. The action is set primarily in the couple’s Ikea-style kitchen, where we discover that, while their relationship appears outwardly perfect, the spark has gone to be replaced by boring routines. As is so often the case with long-term relationships, the discovery of a shared interest reignites their passion; unfortunately for their friend’s pet dog that they are looking after, their shared interest is gruesomely murdering animals.

Through the course of the two act, two-hour play, we watch as the couple build an arsenal of weapons and spend their nights stalking animals around their neighbourhood. The use of raw meat and a blender provides an early, shocking demonstration of their wicked desires, and the dark humour and blood-spattered clothing increases as the fluffy body count rises.

Actors Isabel Della-Porta and Will Adolphy portray the characters brilliantly, bringing both humour and drama to their studied performances. As Gregg’s murderous spree results in his behaviour spiralling out of control, Claire turns into a modern Lady Macbeth character, simultaneously controlling and mothering Gregg, while continuing to decimate the local animal population with the use of a crossbow.

The dialogue is performed primarily as a stream of consciousness directly to the audience, with occasional conversations between the two, which helps the audience fully explore and understand the psyche and motivations of the pair. As a result of the clever writing and performances, both actors brought to life many characters we didn’t see, including Claire’s relationship with her father, their lesbian friends and Gregg’s workplace interactions. The script is full of genuine laugh-out-loud moments, in fact there are so many witty one-liners that the proceeding lines were sometimes lost under the audience’s reaction. With the production performed in the intimate setting provided by The Bunker, eye contact can be maintained with the actors, bringing the audience further into the insanity. Regular use of lighting changes accentuates the action, while the narration by a plastic singing fish pulls everything together.

Overall, this is a clever, darkly comedic exploration of human nature and what can happen when people allow themselves to give in to their deepest desires which is perfectly pitched by two talented actors. The Bunker is a wonderfully atmospheric space for this slick show and I heartily recommend catching it during its limited run. Just don’t take your pets.

4.5 out of 5 stars. They were just let down a coupe of times because of the speed of the dialogue and I missed a few lines 'cos I was laughing!

Running Time: 2hrs including an interval
Recommended for 15+ 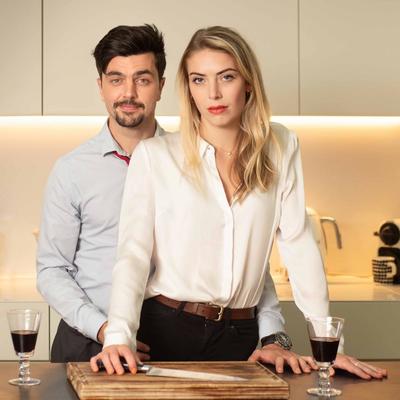 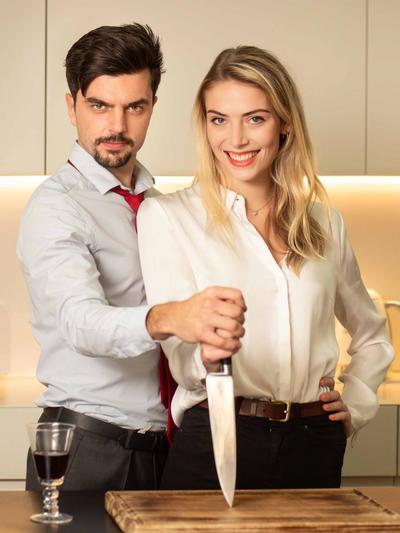