At Halloween, Twisted Attractions presented two scare attractions - Ward 78 and The House of Insomnia, and for the Christmas season have merged them into one new show - Christmas is Cancelled.

Using the entrance to the House of Insomnia (conveniently themed like a log cabin back in October) a few Christmas trees and a bit of fake snow, set the festive scene. Once inside, the first half of the show is predominately a Christmas makeover of the existing "house maze" while towards the end, the attraction utilised the Ward 78 rooms for a rousing finale

Being a Christmas show - gave the team chance to play around with a few festive characters, Santa is inebriated, Mrs Claus is sex starved and the elves don't care if you've been naughty or nice - they just don't like you regardless! In fact, a cast of such unlikeable Christmas characters hasn't been seen since Ghosts of Christmas in Glasgow 5 years ago. Not surprisingly, Christmas is Cancelled is very similar in style to Ghosts, as it subverts all notions of a happy Christmas.

One of the appeals of Twisted Attractions events is that have a rough edge to them and aren't as clinical or scripted as some attractions. Obviously there are some scripted performances to advance the story but generally, the show feels like the actors are improvising as they go along and it feels fresher for this. One performance that was particularly impressive was Santa, who we met at the start of the show. Left to set the scene and tell the story, the portrayal of a drunk old fart was spot on and left us laughing and uneasy at the same time. Unfortunately this scene did probably go on a bit too long and left us anxious to get into the maze itself.

The main attraction seemed to be well populated with scare actors as we were constantly assaulted throughout our journey. And "assaulted" is a good description as at times this was a full contact maze, meaning we could be manhandled or grabbed at any time which just added to the craziness of it. The actors do need to be a bit careful though as one of our group was grabbed by his hood which pulled back and strangled him as he tried to pull away. Apart from this incident, the level of interaction with the actors usually involved a lot of screaming and a lot of leg grabbing

Towards the end of the show, the elves and creatures inside had decided we had definitely not been good and we were forced through a strobe lit cage finale accompanied by a drum and bass version of Jingle Bell - a fitting end to a festive fright!

Putting on scare event at Christmas must be a (pun intended) scary prospect. In a time when people are celebrating and thinking about peace and love, you'd think that murder and chainsaws would be the last thing on their minds. But by cleverly mixing the two, the team have created a scary but fun event that really got us in the festive mood. Or maybe we're just Twisted too?  Happy Bloody Christmas everyone! 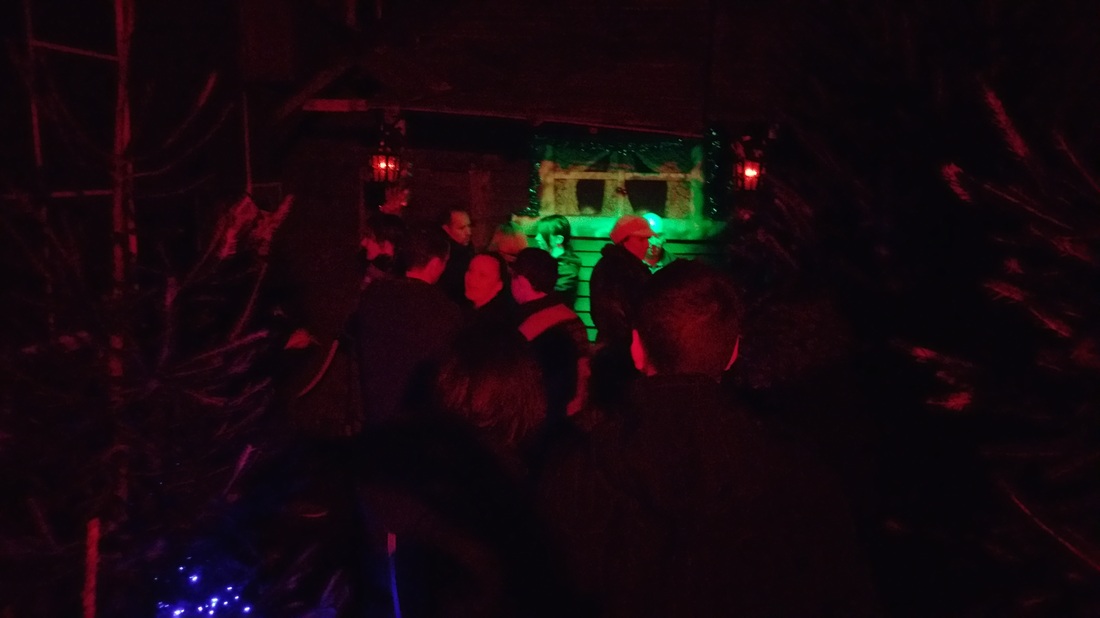