By day, Leisure Island is a small family friendly park with a selection of rides appealing to young kids, but once it closes for the day the Castle Point guys have just a short time to transfer it into something much darker.

The experience started with an impressive ring master character clutching a staff of fire. It was the perfect introduction to the event, and after some back story and warnings, we were sent to explore the route around the park.

One thing that surprised us was the amount of indoor maze sections in the attraction. We were expecting it to be a just an outdoor walk around the amusement park so these themed indoor sections really added to the experience.

Like previous versions of the show at the museum, the scenes are pretty random in nature with killer clowns, cannibalistic hillbillies and murderous priests all thrown into the mix. It doesn’t really matter as they are all brought to like by some lively actors, working hard to give us a scare. In fact, that is part of the charm of the event – it doesn’t try to be big or clever – it just aims to give some good old fashioned scares in the darkness.
​
We had fun on our run through and it was great to see the Castle Point Ghost Tours team back in action. We hope that the Leisure Park remains their home for good few years as it is a perfect setting for a scare event.

As a small independent haunt, we were impressed with Castle Point Ghost Tours when we visited last year. Set in an historical bus museum on Canvey Island, the attraction winds round the exhibits leaving lots of places for the actors to hide,

On arrival we were greeted by a well dressed creature of the night who took our ticket and guided us to into the main event. The theme for this year was that we were being invited into an old haunted hotel on Canvey Island but once inside we were immediately locked in. Hardly a friendly welcome, but the receptionist tried to settle our nerves by inviting us to check into the iconic Room 13. But once checked in, would we ever leave?

On the way to our "room", the hotel porter gave us some of the history of the hotel via a short film and then we were led to  the cavernous warehouse of old buses. It was obvious we weren't going to get much sleep this night!

The darkened museum filled with smoke, loud noises and atmospheric lighting is still an impressive sight on first entry. The hulking frames of the buses create an eerie landscape as well as many good places for actors to hide creating the opportunity for many scares. Some of the highlights included some impressively creepy girls with their chanting and singing and an extremely loud impact scare that had us screaming as metal struck metal in the dark!

Compared to last year we felt that there were a few less actors than before but those in our group who hadn't experienced it before really enjoyed it. Also, we preferred the old layout which ended via the cafe (which allowed people to sit and chat about the event), whereas this year we left the event this year via a back exit door onto a muddy path. It just did not have the buzz about it from previous years.

As we pointed out at the beginning, Castle Point Ghost Tours is a small independent attraction. It relys on a talented
team of volunteers to make it succeed and the team are extremely enthusiastic about their product and it shows. We look forward to seeing what they come up with next year.

Castle Point Ghost Tours are based in the old Castle Point Transport Museum on Canvey island, and each Halloween  they create a spooky themed event passing through the ageing exhibits. This year it was time for the Carnival of the Macabre:

The outside of the event had quite a carnival sideshow feel with an evil ringmaster/barker calling people to meet their doom.  When it was our turn, we were beckoned forward and taken to a small metal door round the back of the venue where we could already hear the noise and screams for the residents within. With the door violently slammed shut behind us, it was up to us to find our way out.
​
The whole museum was filled with dense smoke and between the massive hulking shapes of old buses and some temporary barriers and theming we were able to just make out a potential path through the chaos. It wasn't long until the carnival's freaks were attacking us from all sides and with open bus doors around every corner we could never be sure what was about to pounce. Walking round the attraction, we seemed to be in the dark for ages and there was just no let up from the actors at all. They seemed to be everywhere at once and had a habit of just appearing when we didn't expect it.

The actors throughout the whole show were really lively and quite diverse. We actually thought the team may have employed a troop of midgets to work the show but found out afterwards that the owner's children follow their father's love of scaring people and so you could call this a family affair. Saying that though - these weren't just children in masks, but truly terrifying little monsters that seemed to be constantly snapping at our heels! All the other actors were just as enthusiastic throughout and gave us a really unnerving trip through.

We had a really scary time in the Carnival of the Macabre and were impressed with the spooky outlines of the buses in the fog and the lively and unique scares coming from all angles. The team have created a really fun and scary tour in a unique venue that left us on edge from beginning to end. 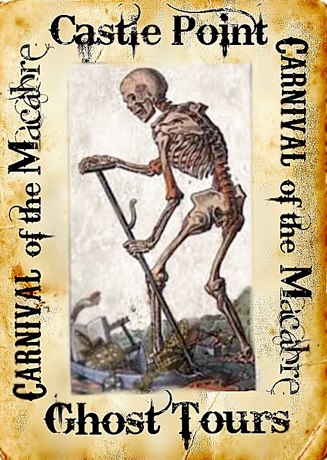 is an amazing attraction with some incredible people behind the masks. great value for money and is probably the most fun thing to do on Halloween!x