Editor's Note: The reviews of CarnEVIL of Horrors below contain comments regarding the family nature of the attraction. The promotional pictures and literature led many people to believe that this was due to be a full on scare production. In fact it has only been since after the event that the organisers have called it a "family" scare attraction. It is clear that all reviewers enjoyed the show and the comments contained within are not intended to be derogatory to the show or its organisers, just that for some people it wasn't the show they were expecting:

CarnEVIL of Horrors  was a brand new attraction created by AtmosFEAR  and was the first scare attraction to be held as part of Blackpool's Showzam festival - a celebration of circus magic  and new variety. Set in the Baronial Hall of the Winter Gardens this two day attraction was promoted with an elaborate back story and some impressive marketing images. But could the attraction live up to the hype? 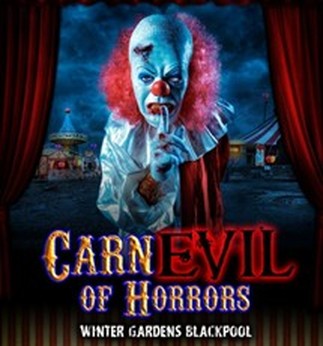 After some playful banter with the bearded lady (which would have been more engaging if the show producer hadnt keep rearranging her clothes while we were talking to her!) we finally stepped through the doors to meet the carnival freaks.

Immediately we were met with incredibly well themed sets that included detailed walls and props as well as a really nice but creepy carnival side show style melody. The organisers told us it was their third choice of music for the show and it was worth the wait as we found it incredibly atmospheric and set the scene well. The opening actor had an exceptionally long rhyming speech to welcome us to his world and unfortunately it was just a bit too hard to hear everything that was said. Even so it was an impressive opening that set us up for our adventure into the darkness.

What followed was a series of vignettes and character pieces that ranged from the engaging (the tarot reader ) through to the strange (the lizard lady). AtmosFEAR have perfected the art of theatrical "talky" scenes and although these aren't inherently scary they do progress the story along and create interest. Our biggest criticism would be that the actors are too busy reciting their long speeches and dont really allow time to improvise or personalise the experience.

Towards the end we were expecting some really large scares and instead got an impressive magic trick performed on one of our group and a ten foot clown that could have been scary but just sort of lumbered about. We, like most of the groups around us - left slowly and calmly with no final scare.

Interestingly - despite the scary marketing, the organisers warned us that this show would not be scary and was aimed at the family market. We would say that they got this spot on. You certainly wouldnt want to take very small children in, but it really would appeal to families with older kids  rather than hard core thrill seekers.

Despite a few niggles - we actually really enjoyed CarnEVIL as a creepy theatrical performance piece. As a  temporary 2 day attraction we can excuse the obvious build limitations because in the end, we found the story and characters engaing enough to want to know more. And for that, the producers should be commended. 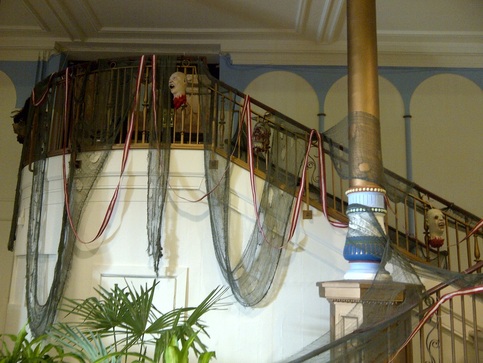 I really liked the opening character, but it was hard to hear. His speech I think would have been far more impressive if we could hear it better. Hopefully over he run the sound levels were tweaked a bit as this was a recurring theme throughout. I quite liked his animated style with his over the top gesticulating as the barker. It was a great introduction.

Things that stood out in the show for me included the lizard girl. Although it didn't really explain itself too much, her pushing the needle through her tongue was a nice little trick which I thought set the mood of a sideshow style circus of freaks? I thought spinning the group round at this point rather than the norm you usually get before entering an attraction was novel and although not a major thing I think it could throw a lot of people.

I found it a shame that they'd recycled the dot man scene from Alton's Carnival of Screams; I felt Alton did a better job as we seemed to get numerous scares from the actor who seemed to go in and out of camouflage. Whether or not this was due to light bleeding in from other scenes due to the design I'm not sure but for me although a great effect I don't think it was utilised in the best way.

Secondly I would have liked for the pathway to be less obvious, carnival mazes especially are designed to play on disorientation and confuse you but throughout the maze I didn't feel lost in any way and could clearly see where I was heading to the next scene.

I thought the interaction between actor and punter was interesting too, rather than the actor simply scaring us via an impact scare they manage drag us into their world and use us in their show.

Personally I enjoyed it as a theatrical piece even if it didn't scare us, the set design was actually visually impressive and certainly one of the attractions strengths. There was some nice attention to detail such as the dolls crawling out of the mirrors.

It's worth pointing out that the attraction had only just opened and teething problems are inevitable in any attraction. Sound levels and similar issues were probably addressed through the day but when the attraction only has a two day opening window I would have hoped for them to be more on the ball.

We approached the winter gardens with trepidation as the flyer for Carnevil hinted at a frightening experience to follow. Before we went in we approached a clown who had genuinely scary eyes. His outfit was great and he cheekily exclaimed 'my, dont you have bright teeth sir! It's a shame you're not as bright as your teeth tho haha!' This was a great start and really whet our appetite for what was to follow...After a quick flirt with the bearded lady on the way in she told us to be wary and how much we had to fear. This ramped up the tension and I eagerly joined the front of the line. On going in we were welcomed by a gentleman who I couldnt understand and a couple of masks that looked familiar. Onward we went and I noticed the nicely atmospheric music. As we progressed I couldnt help notice the walls of the maze were made of those wobbly boards that you used to get at school that your art teacher would stick your drawings on. That didnt give it a very professional feel. I liked the sexy lady that emerged from the box who pierced her tongue. I liked the tarot reader who was charismatic and fun. But all in all there were no real shocks or scares. I realise they wanted to attract families but then why have a flyer that suggests big scares? And anyway having been to the dungeons earlier in the day where they get the families in that had got me with some real jumps there. If Atmosfear want some real scares for their next project I suggest they play on darkness and suspense by having doors you open and actors who have genuinely scary make up that chase you! All in all the clown was the best part of carnevil, we wanted to take him home with us!

i went with scaretours to visit this attraction expecting a full on frightening maze from the advertising of the event that atmosfear had layed out but it was very theatrical and very family based.
the first actor had a great opening script but as has been said in other he was very hard to hear over the very creepy carnival music. the lizard lady was a good quiet distraction. the spot room wasent that effective as it wasent dark enough for it to work very well. the magician was a very good theatrical piece and so was the fortune teller as well as being very interactive with the group. i was dissapointed with the final scene though and the clown as it really could of been used more effective. overall i found the attraction to be very theatrical and very well scripted but could of really done with a few more jumps and scares between the scripted parts which would of made it a much more thrilling experience.

On Wednesday the 15th February, we drove out to visit Atmosfear’s latest production in Blackpool. Carnevil of Horrors was a walk through open top scare maze similar in style to Atmosfear’s many past indoor mazes, based inside the Blackpool Winter Gardens, and themed on, as you may have guessed; a carnival of all that is dark and frightening! We visited in the early afternoon and managed to go through as just our group of three, so it was interesting to see how the actors dealt with such an intimate audience, but I thought they all held their ground and stayed in character very well.

Although there were a couple effective startle scares (for example, in the dots room), they were very minimal - this attraction was more centred on characters storytelling (which unfortunately was made almost inaudible with the background music & noise on certain characters such as Valentino Diablo) and seemed to be focused more on a family audience. It certainly was tame in comparison to other scare attractions I have visited, so this might be an attraction that is more suitable for newcomers or younger visitors. However it was entertaining, there was a variety of characters to witness, including a snake woman, a ventriloquist dummy and his ‘mother’ (much in the style, I thought, of the James Wan film, Dead Silence), there was also a good dash of humour in the strange and eerie fortune teller, and of course a few evil clowns, as what nightmare circus or carnival would be complete without them?

The set was very atmospheric; winding passageways covered in red draping on both sides, psychotic clown themed dolls and masks peeping out of every crevice and a sinister circus freak waiting to meet us around every darkened corner. Unfortunately the lighting, since the maze was open top, gave a few hiding monsters away, but the man in the spotted suit managed to give all our group a shock! Somehow I managed to have my neck cut through with a blade by Valentino Diablo, and strangely enough, is a recurring incidence for me in visiting scare attractions which I find quite alarming, I must admit.

Did you also visit CarnEVIL of Horrors? - tell us what you thought here