Note - Camp InTENTSity was created by the team at ScareTOUR and ScareCON in association with Twisted Attractions, as a one off event to end the Halloween season. The event involved an overnight stay with (which was moved inddors due to teh extreme cold, a room escape style puzzle element (where the guests had to solve clues to understand the truth of what ws happening) and an extreme final that dragged guests out of their sleep and into the nearby woods

The reviews below are from some of the "survivors"

Attempting a true overnight scare experience has been on my bucket list for quite some time. After sadly missing out on Horror Camp Live, the news that an overnight camping experience was coming to ScareCon had me jumping for joy! Being a joint effort between Twisted Attractions and ScareCon, I think it’s fair to say I was a little too eager to get my hands on tickets for this event. I think I still owe Michael an apology for pestering him so much!

The evening certainly didn’t disappoint, offering up two distinct sections of the evening that entertained and terrified me in equal measure. First was the puzzle half, which saw us working as a team to decipher coded messages left behind for us in three of the Terror Farm’s attractions. This segment was engaging and challenging, encouraging our team to work together to unravel the mystery of Farmer Ray’s disappearance. The puzzles ended up covering the entirety of the farm, ending with us hunt for a rabbit and a spade… you know, as you do in the middle of a deserted farm after midnight. It’s fair to say everyone had a ton of fun solving the riddles, but I do feel this section of the evening could’ve done with some scares. I am glad we weren’t constantly tormented whilst scouring the grounds, but on overlying sense of urgency from an omnipresent threat would’ve worked wonders.

That being said, the second half of the night certainly didn’t lack scares. In fact, it packed one hell of a punch! Just as we drifted off to sleep, a hoard of manic aggressors charged our cabin and grabbed us one by one. We were hooded and dragged off into the night… Nothing can prepare you for a waking up like that, there really is no greater scare out there! We were so flustered we genuinely didn’t know what to do. It’s embarrassing to admit, but at one point I was convinced I was back in Snuffhouse After Dark, that’s just how full on these actors were! We were on the receiving end of some quite brutal treatment. We were hauled off into the woods where we were tormented by our captors for what seemed like forever. It was cold, we were being attacked and we couldn’t see. I think it’s fair to say we were downright scared. After a while, we were seemingly left alone, left to travel back to our cabin to sleep it out. But no. Things are never that simple. A mere few feet away we heard the revving of chainsaws and legged it. Oh dear… I have never felt this threatened by a chainsaw in my life! These actors were hauling these things around, and were pursuing us relentlessly. Even the cabin couldn’t keep us safe as they swung their weapons around with ferocity.

I have always been a fan of Twisted’s acting staff, but these really were some of the best actors I have seen. They were intimidating and knew how to pull of an excellent scare! As they retreated back into the night we all had a collective sigh of relief as we settled back down to sleep. Camp InTENTsity was everything I wanted from an overnight scare experience and more. Whilst I think the plot could’ve been developed further and scares could’ve been spread more evenly across the night, it was easily one of my highlights of the 2016 scare season. Well done ScareTour and Twisted you gave me a sleepless night I won’t be forgetting for quite some time!

The plot linked reality and fiction really well and made for a believable story that lent clear reason and purpose for completing the tasks.  The tasks themselves were challenging but not too tough so remained fun throughout. We would say it was a little confusing seeing the actors wandering the park as themselves. Whilst on one hand, it was a perfect excuse for them still being on park and their excuses made for some interesting red herrings that I know some of us were tempted to pursue in case it lead us to some additional clues. But on the other hand, it would have been cool to have some brave-it-alone style maze runs with the actors in full maze character. Ultimately, I agree that reality wins out on this one though and it made more sense for them to act as themselves.

The mole was a little too obvious but it didn't really damage the experience. I felt it actually added to the tension and seemed to encourage an entertaining siege mentality amongst the group. - We loved the early morning kidnapping by Torturama. Call me a little sadistic but it delivered a great kick of adrenaline at a time we were at our most vulnerable with most of us having been right on the cusp of falling asleep - Camp InTENTsity definitely lived up to its name here! Whilst it was bloody freezing, I was kind of hoping the kidnapping/torment would be a bit more prolonged than it was and, li, I was expecting to get bundled into the onrushing vehicle which gave us a great scare earlier.

Crucially the kidnapping made sense to the storyline too rather than just being a random occurrence shoe-horned into the experience 'just because'. We had the evidence that would expose Torturama and they clearly didn't want us finishing the job when the police station opened the next morning so they needed to do something about us! - I was um-ing and ah-ing about the conclusion to the story - I think most of us were expecting something to happen one way or another the next morning to round off things off. However, in hindsight, Torturama made a point of hunting down each of us with chainsaws after our kidnapping in which case, for the purpose of the storyline, I guess it could be assumed that none of us survived the night anyway and the conclusion was in fact the whole group's demise. Alternatively, we do manage to survive the night but in that case it would be a mere formality that we contact the police the next morning without the need for an actual scene, event or task to confirm that - I like a story that leaves the ending to your own interpretation!

As I say, we really enjoyed the experience on the whole. It must have been a real challenge to pull this together during an already really busy Halloween. Fran and I have been lucky enough to attend the Scare Rooms at Alton Towers in 2013 ('Til Death Do Us Part') and The Ultimate Sleepover the following year. Each overnight experience has been unique and enjoyable in their own right and I think Camp InTENTSity stands up well with a compelling storyline.

The only other overnight experience that I've done was the AT Ultimate Sleepover, which for those who were lucky to go will agree was a blast (gutted they've stopped doing this). However whilst AT polished script, effects and location was certainly entertaining it lacked the bite that InTENTsity had. This wild night was more like a 70s horror, a back to basics thrill ride to AT's Hollywood modern remake.

It wasn't perfect; the actors should've remained out of sight for part 1. Their reasons for remaining onsite did little to convince me and served as a distraction if anything. It would've been more tense had they been playing maze characters, or as characters specifically written into the script (police searching the grounds or as security).

Admittedly I hadn't questioned the true nature of the 'plant' until eagle-eyed Hannah sussed her out. However, although her reaction to the accusation only raised our suspicions, this belief soon changed when the actress returned to the cabin with her sleeping bag, a dog in tow and any a fairly convincing story that at the time made me think that we misjudged her. Kudos to you for seeding doubt.

I don't know about everyone else but I was on the verge of slumber when all hell broke out. I'm not going to lie, I was pissed off by the intrusion (argh I need sleep!) but as I accepted my fate, the abduction was actually pretty well executed. My kidnapper was bloody aggressive, whispering abuse in my ear and forcing me to walk hands and knees through the woods; I swear he was either twisted or very kinky. I loved it!

My only critique for this scene was the chainsaws. They would've more impactful had they not been in use earlier in the day. In the end I felt they were overused and a little predictable. I would've been happier being chased out of the woods by masked thugs wielding machetes or something like that. Perhaps a missed opportunity was presented by the van speeding past us. I was expecting to be chucked in the back and driven off somewhere else on site. Also the ending would've worked better had the story been followed through until morning. We were told we had to call the 'police' at 7am. So it would've been a neat way to end the event with a police unit turning up to the cabin at 7 assuring our safety and confirming they've apprehended the gang.

Fab event and I would definitlely do it again. I personally feel the clues got found too easy  but loved the concept. The actors who where playing actors looking for stuff didn't work at times and i personally feel having the normal actors would of worked ie in Piggots a man with pig mask chasing us out and making it hard to get clues. We kept being told about a shadow but never got to see a shadow. The insider of the group got found out to soon then when we questioned it she snapped at us which made us suspect her more! In the final scene I feel consistency with actors was needed, mine never really spoke to me but i could hear everyone else getting abused. (I even laughed loud to try but nothing). You tried something different and it worked. (Hannah cried like a little bitch!) 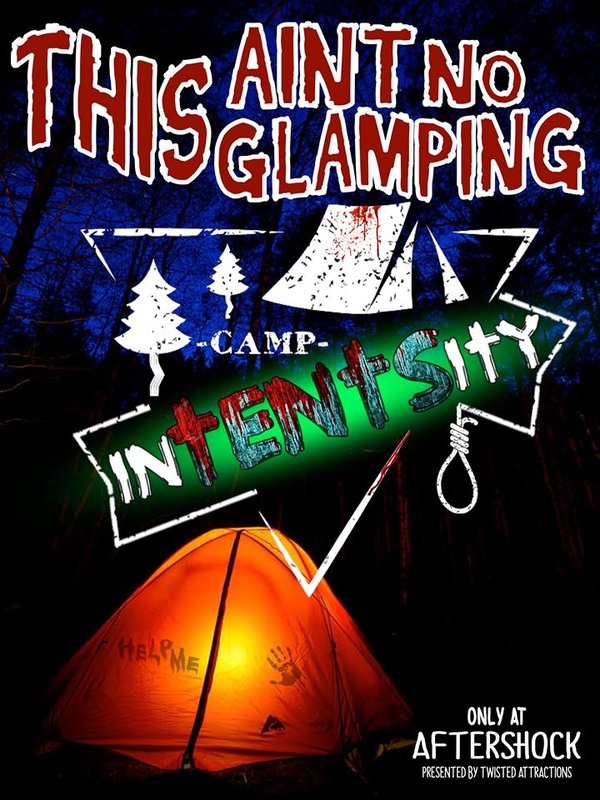 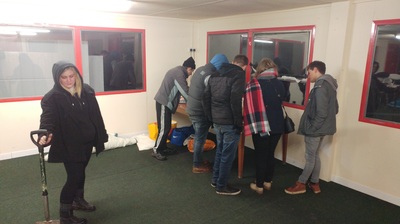 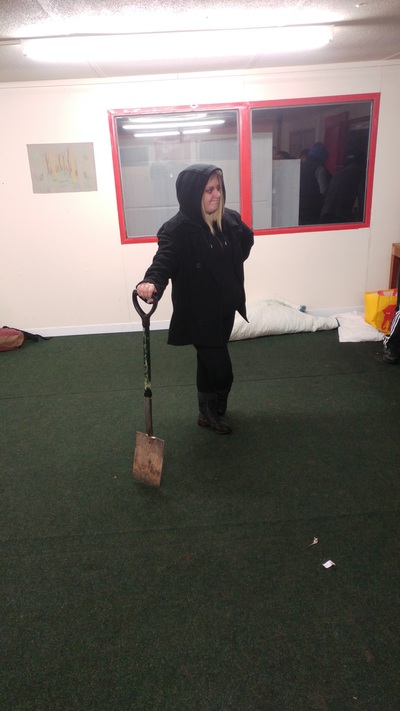 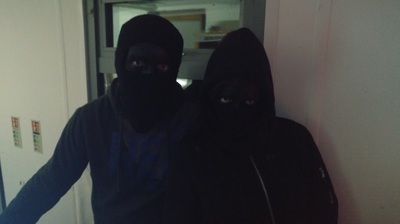 We grabbed a few pictures through the night of the teams working together, the infamous shovel, and some hooded goons in a more relaxed pose than when they stormed the sleeping guests at 4am!