Cabin in The Woods - Escaper MK
​

Due to their very nature, room escapes can be inherently scary, and this is something that the recently opened Escaper MK have played on. Their two experiences both lean towards darker themes with threats of Alien Abduction and being trapped in a Cabin in the Woods with a serial killer. So following the standard warnings and instructions, we soon found ourselves trapped inside a very dark cabin with just some flickering candles to provide a glimmer of light.

Our first task was just to try to figure out the details of the room we were in, and see if we could find a torch, or anything that could help us. It was an audacious way to start the experience and as we groped our way around – the clues and secrets were soon unveiled.

In reality, from that point, we cannot say much more about the experience without giving too much away. The one room we were in soon lead to more and we ran back and forth solving clues, puzzles and opening locks – each one getting us tantalisingly closer to our final code to escape.

There were several unique puzzles, that had us stumped along the way, and we must confess to having to ask for a couple of clues just to help us out. It did not help that a couple of the locks were very fiddly, so although we had the right codes we struggled to get the locks open efficiently. Saying that – we escaped the Cabin with just over two minutes left!

With a horror themed room, we always expect a few good jumps, and the team managed to surprise us several times throughout. The scares were simple but effective, as they were timed at occasions when we were distracted solving clues. Talking to the team afterwards – they have some even more devious tricks to play in upcoming versions of the show!
​
One of the nice parts of this experience was that we played with long-time friends of ScareTOUR, who had never actually done a room escape before. Now they are hooked. As one of the group said afterwards – this is genuinely like something out of a horror movie! Therefore, if you are looking for a fun escape room experience with a dark and scary theme, then we would definitely recommend Escaper MK. 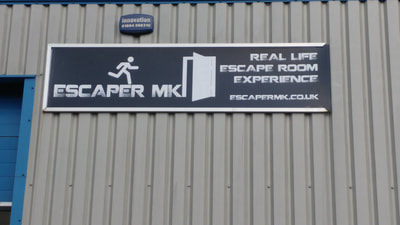 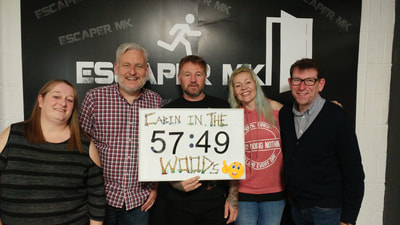 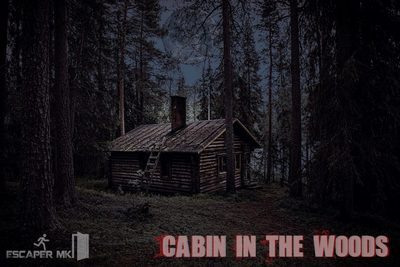