We have been visiting Broadwitch Hauntfest for years and have watched it grow and expand into the incredible event that it is today. The team have always had a sense of fun and mischief alongside a desire to scare and shock and all their attractions have you screaming one minute then laughing the next. Add in, the incredible theming and the roaming characters then it really is an event not to miss.

First off - lets start with that atmosphere. In the past the event has been spread across several barns and with the hay ride tractors departing every few minutes through the middle of the site - it has always felt a little fractured. This year all the attractions have been moved into the back of the farm and are contained in one central area. With catering, music, characters and more, it really is the final thing that was needed to create a true scream park atmosphere. This has meant they have dropped the low capacity hay ride into the woods, but seeing as they have added an incredible new maze to the line up - we didn't really feel that the hayride will be missed.

The Field of Fear has a reputation for taking fun, light hearted stories and turning them into something a lot darker. In the past we've seen Charlie and the Chocolate Factory and the Wizard of Oz, and this year's surprise element was Grimm's Fairy tales. From Snow White to Hansel and Gretel, the maze was populated with recognisable characters but all given an evil twist. This year the corn was particularly high and we had a number of scares just from people appearing out of the darkness, let alone the detailed set pieces, scenes and characters along the way. The Field of Fear always impresses us and this year was probably the scariest yet. We did this first as our "warm up" maze and it really set the tone for the rest of the night!

Nothing has really changed in Containment and it remains a short sharp assault on the senses. The hospital rec room with the inpatients was as insane as last year, and we will be very surprised if that piano survives the whole of the run! Due to the tight nature of the corridors and the rooms, the actors are able to get really up close and personal;and at times it's almost uncomfortable how close they get. They are loud, angry and very scary! With the big fire effect at the end and the winding corridors throughout - there is something for everyone in this attraction.

Thirteen was new for 2013 and remains a trip through many different superstitions  and fears. The actors seemed so much livelier than previously and we screamed throughout this attraction. We must just mention the actor on the bed who somehow managed to terrify us all completely - once again by being able to get very close and all the actors used this to their advantage. By the time we were in the plane crash finale and actually having to crawl between the air hostesses legs, we had screamed and laughed throughout. Amazing how a maze that was slightly underwhelming one year could be so manic the next. High praise to all the staff!

Spooky Castle is Broadwitch's signature haunt and is still one of the most elaborately themed mazes in the UK. The attraction is like a rabbit warren that just keeps going and going with each room creating a mix of appreciative nods to the incredible theming followed by a scream, as something, or someone jumps from somewhere. A very large moving prop from last year had us hitting the floor for the second year in a row and once again all the actors were up close and personal throughout. Spooky Castle is the the most popular maze at the event and it is clear to see why the public love it so much. It is definitely more "spooky" then terrifying, but when it is executed so well it's nice to have a mix of different style scares across the park

New for 2014, we had no real idea of what to expect with Biometrix. Hidden behind industrial theming and barbed wire - the maze has a daunting exterior and even the detailed queue line sets up the story of what is about to happen. Whilst queuing, guests are interviewed "live" by a news correspondent which is relayed through the queue, and the whole are creates a terrifying expectation of what is about to happen. Unfortunately NOTHING could have braced us for what did happen! Having done all the other mazes in the park, we thought we knew what Broadwitch's style of scaring was but for Biometrix all the rules are off!. This maze was a frenzy of chasing, jumping, grabbing, jostling, leg grabbing etc etc. it was so unexpected and was absolute chaos (but in a good way),. From beginning to end, we found ourselves just bounced from creature to creature  and they all certainly knew how to use the space they were given. Arms and bodies would appear from nowhere and just showed no mercy. Towards the end we completely forgot about our mission to locate and set off the warning beacons ( a great interactive touch that brilliantly distracted you so creatures could attack). The whole maze from scenery, actors, noise etc just left us completely shocked. When we finally burst out into daylight again we were genuinely gasping for breath. All in - its an incredible attraction and something that Broadditch should be extremely proud of.
One thing we noticed with all the mazes was how good Broadwitch is at batching guests through their attractions. Despite quite short gaps between batches (which really keeps the queue line moving) - we never once caught up with or got caught up by another group. The actors throughout all the mazes were effectively managing the experience throughout which was a joy to behold.

And finally, we have to just mention the roaming charcaters around the attractions. They add a huge amount of fun to the proceedings and with the newer centralised Hub - have a better chance of working the crowds. The team were as funny, scary and offbeat as we have come to expect

Looking back at the whole event it is impossible to actually find anything to fault, The mazes and the range of scares within were all top notch, the atmosphere was incredible and we have probably never actually screamed so much in one scream park this year. Broadditch really is going to be a hard one to beat for 20141!
Pictures coming soon 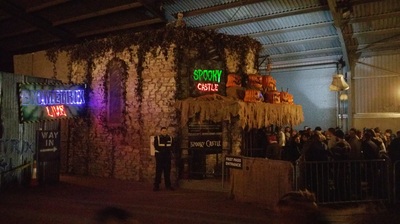 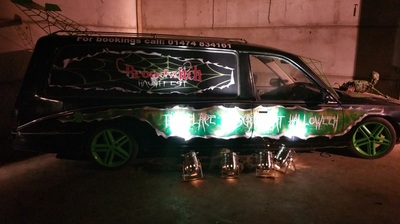 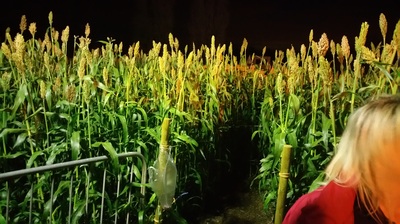 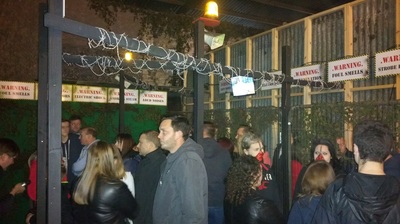 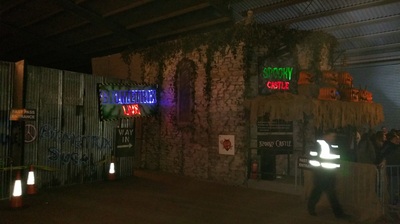 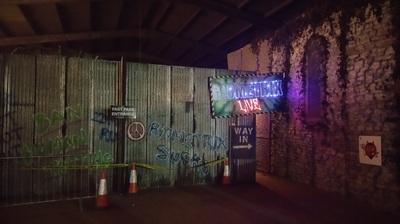 Another fantastic year at Broadditch Farm! They really stepped up their game this year and the new Biometrix maze is utterly brilliant and absolutelt terrifying! Will be back year after year! Wonderful!

We arrived promptly at 6pm to find the ticket booth was not yet open to pick up our pre booked tickets, so we queued up with everyone else, there was one roaming actor dressed as a zombie going around I have to admit he was brilliant, after we picked up our tickets we went to the first maze but as none of the actors were ready they didn't start opening until 6:45pm.

There were lots of kids running around screaming which unfortunatly was a bit annoying as we didn't understand why they were at the evening event when there was a day time event for the kids.

Our favourite maze was Field of Fear which was great, scary and fun, the actors were fantastic and did their job so well, also Biometrix was very good even the queuing system was very entertaining with the Zombie guy scaring everyone in the queue!

I was surprised they had done away with the nighttime trailer rides. They have also moved the spooky castle to another barn, so there was a few changes.
Spooky castle - the haunt looks great from the outside, they really have gone all out for the appearance. Inside however, it was the same sets, just moved around. The live haunt is good, but you just got the feeling that you have been there before.
Field of fear - energetic actors, tall corn, and great sets. Thankfully it was dry, this would be a nightmare in the wet!
Thirteen - I am sorry, but this was just bizarre. The floating faces room was normally effective, but the lighting gave the actor away. No one in our group was impressed with this haunt.
Containment - same haunt, same look. They really need to do some new design on this haunt.
Biometrix - new haunt, and A great addition to to broadwitch. It is the only haunt where you can be touched by the actors. There are shocks and great actors. It is a welcome and fresh new haunt that this event is crying out for.
Twilight tours - welcome return for this ride, it is fun and the actors creep you out enough to make it worth it.
Apart from the high price, none of the haunts opened on time. We are talking nearly 35 minutes late. This is unacceptable, especially when you have young children. Be aware of this if you are planning a visit.

As stated in other posts, there were a few changes at the farm. Biometrix and spooky castle are in the same barn. The trailer rides only run until six.
We got to the spooky castle dead on six and waited in the queue. At 6.40 we were told the actors were in place and we could go through. To say we were a bit annoyed would be an understatement. The roaming actors can only do so much. I understand from chatting to another group that all the haunts opened late. This is not good enough.
Biometrix and the field of fear were good, spooky castle and thirteen were tired repeats of previous years. Containment is a complete waste of money.
I will not be returning as I fear the paying customer is being taken for granted. The big amusement parks do halloween events that are better value. It is a shame, it used to well run, but maybe they do not need to bother anymore?

Great set-up, very poorly executed.
Spooky castle and thirteen were good, the field if fear was decent, but thirteen is EXACTLY the same as last year! Containment gets worse every year. If they are short of ideas, watch youtube. There are small home haunts on there that are better organised and have better scares. That may seem harsh, but if you charge £7 for a walk through that consists of two containers, you have to give value for money. We were kept waiting for the actors, and I think 25 minutes is not acceptable to be kept in a queue. I notice the owner kept walking up with a silly grin. It would have been nice if he apologised for the delay, but we got nothing. Poor customer relations in my opinion.
I believe that this attraction has stopped trying to please the customer. Can they defend the fact that two of their haunts have remained the same?